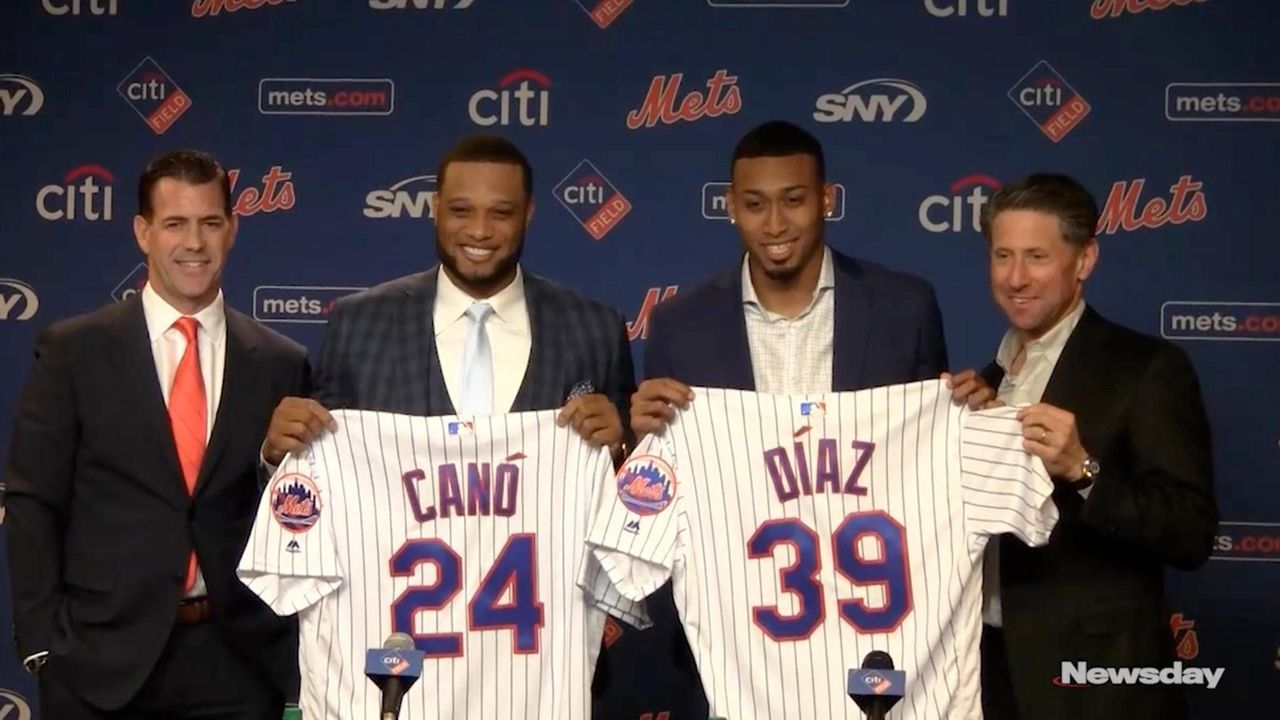 The Mets intruduced Robinson Cano and Edwin Diaz at a press conference at Citi Field on Tuesday. Credit: Patrick McCarthy

Jeff Wilpon loves a big splash. So when it came to general manager Brodie Van Wagenen approaching his offseason task of reworking the Mets’ roster — of making the Mets good again — Wilpon was pleased that the first move of note was a straight-up cannonball into the deep end.

The Mets’ acquisition of second baseman Robinson Cano and closer Edwin Diaz, in a seven-player trade with the Mariners announced Monday, was a reason for the organization to celebrate Tuesday, to reserve front-row news conference seats for Mets VIPs, to draw dozens of reporters to Citi Field on an otherwise random December day, to jolt the fan base with a degree of enthusiasm via a late-morning livestream.

“I did talk to Brodie, ‘OK, let’s make the first move that you do[A LARGE ONE], because your first is always your first,’” said Wilpon, the Mets’ chief operating officer. “And knowing that this was his first deal, I like that it’s a bigger deal than just a run-of-the-mill deal that wouldn’t have [reporters] out here today.”

Here is how it came together:

The Mets and Mariners first touched base at the GM meetings early last month, Van Wagenen said, but it didn’t get real until the last week-plus.

“Not that long in calendar days, but a lot of hours,” Van Wagenen said. “Really, over the course of the last 10 days it was all-consuming for a lot of people in our office while we were still trying to juggle other things.”

As talks progressed, the trade took many forms. A dozen players were discussed, according to Van Wagenen. The Mariners signaled that Diaz, who led baseball with 57 saves in 2018 and is under team control for four more seasons, wasn’t available.

That didn’t stop Van Wagenen from asking, repeatedly. Wilpon said part of the Mets’ urgency with Diaz was to block him from going to the Phillies.

“We felt like this was really attractive if we could add a bullpen piece as we’re looking to do that across the board,” Van Wagenen said. “[Mariners GM Jerry Dipoto] told us, ‘No,’ a number of times, and so we kept staying on it, we kept trying to be aggressive with it, and ultimately found a deal structure that could get both players.”

That structure wound up including outfield prospect Jarred Kelenic, whom Dipoto called “a true five-tool player with a very high ceiling,” and pitching prospect Justin Dunn, a Freeport native. That stings for the Mets, but Van Wagenen defended it by noting “there’s always an acquisition cost when you bring in premier talent.”

“To the Mariners, Kelenic was a must-have,” Van Wagenen said. “If they were going to include Diaz, there really wasn’t going to be a deal structure that didn’t include him. So we had to have those internal discussions and make sure we were all comfortable with it before we went too far down the road.”

Eventually, it all came together. Van Wagenen referred to Cano as “one of the best second basemen in the history of the game” and called Diaz “the best closer in the game.”

Said Diaz: “For me, when I know I got traded, I was excited. I texted Robbie right away, ‘Hey man, we’re going to New York, let’s go there, let’s have fun and be with the best fans in baseball.’ Was excited about that.”

The move represented a lot for the Mets. Van Wagenen called it “the opportunity to go fill two primary needs.” To Wilpon, who rattled off a bunch of other team needs — relievers, catcher, utility infielder, “maybe” a centerfielder — it was just the beginning of a busy offseason. And for Brandon Nimmo, at the ballpark for an unrelated charity event during which he dressed up as Santa and handed out gifts to local kids, it was a vote of confidence in this Mets core.

“It tells you what Brodie has been saying since he got the job: We want to win now,” Nimmo said.

As such, this trade will have a ripple effect on the rest of the Mets’ winter. Most notably, perhaps, the chances the Mets trade Noah Syndergaard — a hot name in the rumor mill — appear minimal.

“Noah Syndergaard is critical to what we’re trying to do now,” Van Wagenen said. “It would have to be very special circumstances for us to even consider moving Noah Syndergaard. I think this deal puts us in a position where now we want to build around this core.”

Brodie Van Wagenen called Robinson Cano “one of the best second basemen in the history of the game,” and his career numbers and rankings at the position back up the glowing statement:

Robinson Cano will be the first Met to wear No. 24 since Rickey Henderson nearly two decades ago. He joins Willie Mays and these non-iconic names to wear that uniform for the Mets:

Vaccination or negative test required for Isles games at UBS Arena
Jets' Saleh wears Mepham football shirt to honor LaSpina
Gano approaching but not concerned about field goal record
Eli, Feagles and the story of the Giants' No. 10 jersey
70 Isles games to air on MSG Networks this season
Yanks arrive in Boston for pivotal series with playoff berth at stake
Didn’t find what you were looking for?