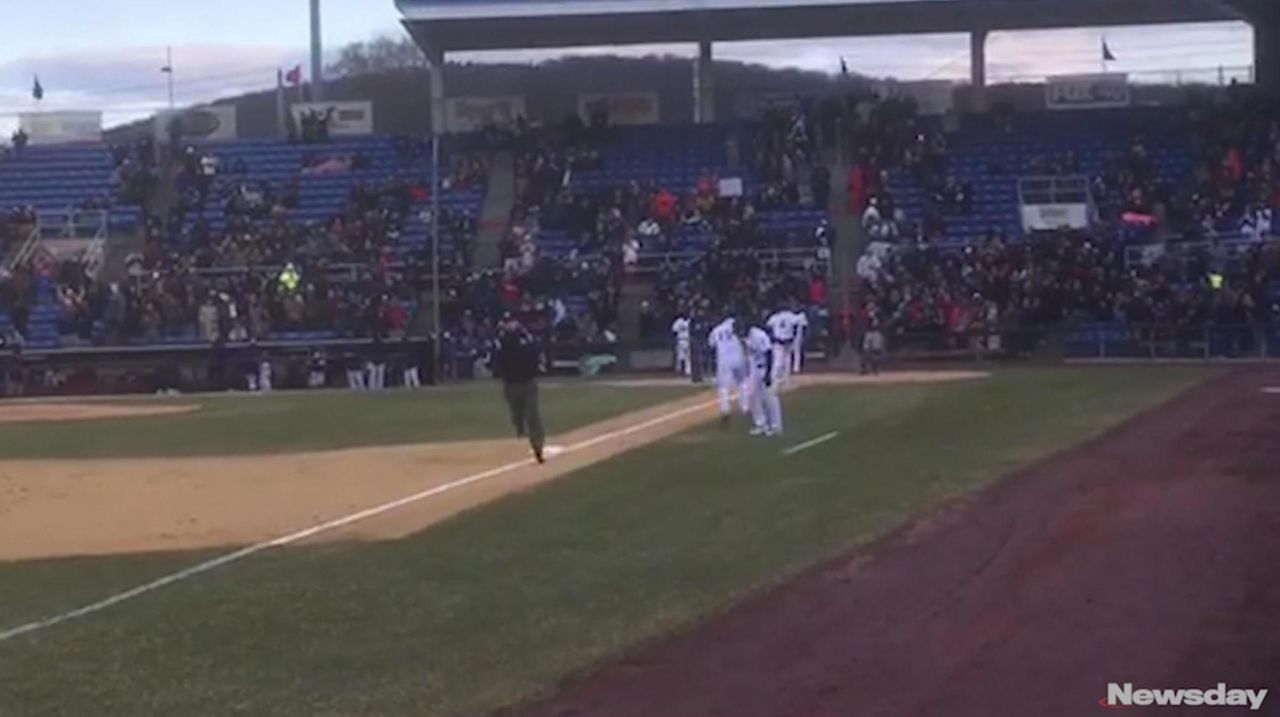 Mets minor-league outfielder Tim Tebow was introduced for the Double-A Binghamton Mets for the first time on April 5, 2018 and hit a home run on the first pitch. Credit: Newsday / Mark La Monica

BINGHAMTON, N.Y. — Tim Tebow sure knows how to make an entrance.

Playing his first game in Double-A ball, Tebow hit a three-run homer on the first pitch he saw. The Mets minor leaguer connected on a frigid Thursday night at home for the Binghamton Rumble Ponies in the Eastern League, facing Portland.

Last April, Tebow homered in his first at-bat with the Class A Columbia Fireflies of the South Atlantic League.

This time, the former Heisman Trophy winner and NFL quarterback sent a liner far over the fence down the rightfield line as the crowd at NYSEG Stadium stood and cheered the 30-year-old outfielder.

The lefty-swinging Tebow capped a five-run first inning against righty Teddy Stankiewicz, a second-round draft pick by Boston in 2013. The Sea Dogs are a Red Sox affiliate.

All of the field-level box seats at NYSEG Stadium were sold on the blustery night, and although plenty of seats were empty, Tebow’s appearance lured Mets chief operating officer Jeff Wilpon north from New York City to take a closer look at the organization’s most unusual prospect.

“He’s another ballplayer. I understand all the excitement because it’s Tim Tebow,” Wilpon said before the game. “We look forward to having him perform and move up the system, which he’s doing. That’s why he’s here — moving up the chain.

“He did well last year in A ball. Now, he’s got to prove himself here and probably have to go to Triple-A at some point. “He’s a hard worker. He’ll do whatever he has to do to succeed.”

Tebow, who was not on the Mets’ 40-man major league roster, was re-assigned to the Rumble Ponies after going 1-for-18 (.056) with 11 strikeouts in seven big league exhibition games. He was hampered by a left ankle sprain and had been used solely as a designated hitter or pinch hitter because of the injury.

Tebow, who arrived in town on Monday, started in leftfield against Portland and batted seventh.

“He comes in, gets his swings in early. He’s been consistent with it,” Pascucci said. “That’s kind of the name of the game, finding a spot where he’s comfortable in the hitting zone. He’s been repeating that swing pretty well right now. To see him a year later with the improvements he’s made in his swing, that’s a tough thing to do, catch up all those years.

“But from the first time I saw him to this spring he’s made some nice improvements. He’s always looking to get better,” he said.

Tebow split last season, his first in the minor leagues, between a pair of Class A teams — Columbia and St. Lucie in the Florida State League. He hit .226 with eight homers and 52 RBIs in 126 games.

Early in spring training, Mets general manager Sandy Alderson said he thought Tebow had the talent to make it to the big leagues. Alderson said the experiment wouldn’t last forever, but he remained optimistic because Tebow had made “meaningful progress.”

Tebow said in spring training that his focus was just to continue to improve and keep working. He said he spent three to five days a week to get ready for Year 2 of his pro career in the Mets organization.

Joe Pochkar, a season ticket-holder from nearby Endwell, called Tebow’s arrival a win-win for an area along New York’s Southern Tier that’s been among the slowest regions of the state to recover from the financial crash a decade ago.

“I like it. Tebow’s a great guy,” Pochkar said. “I think he deserves it. He works very hard at his craft, and his passion and work ethic rub off on other players. It’s more than just the ability. So he hits a buck seventy-five, if he gets all the other players with his passion and attitude and desire, it’s fantastic. I wish him all the best.

“A lot of people rag on him for doing what he’s doing. This guy’s positive, he’s a nice guy, good for the community,” Pochkar said. “He’s 30. He took a long time off. Double-A separates the men from the boys. We’ll see.”