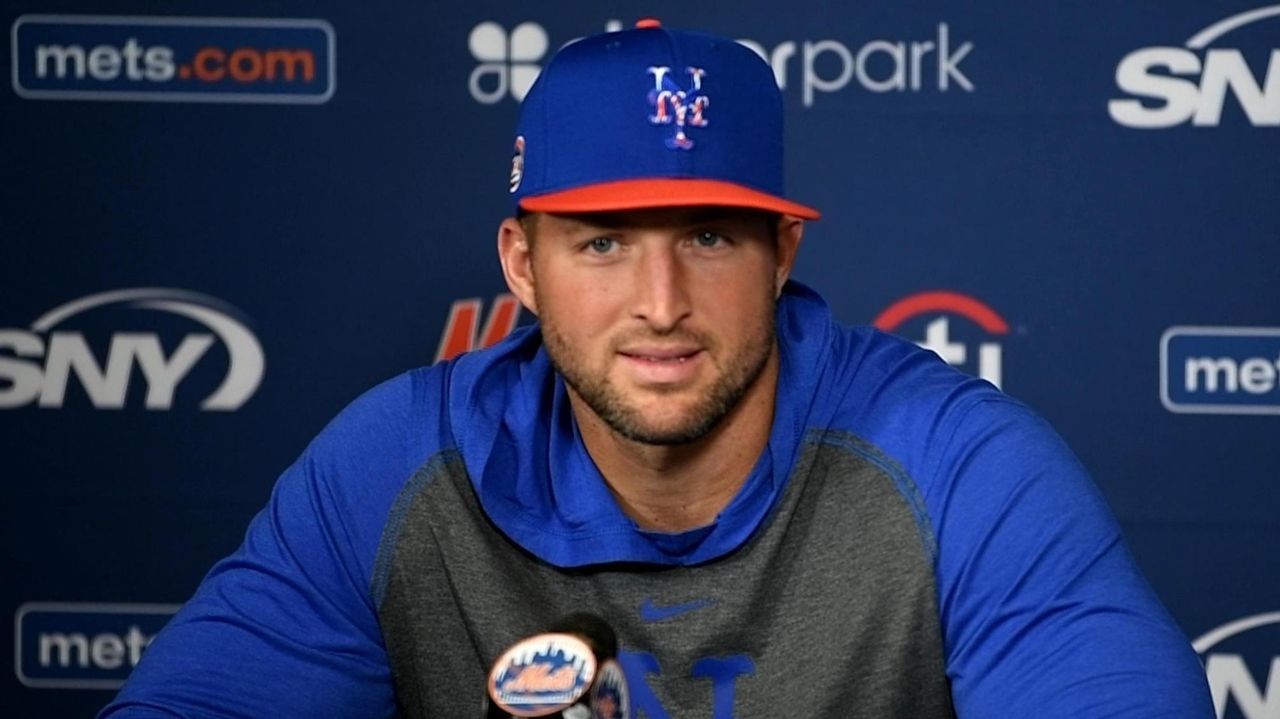 On Sunday, Mets outfielder Tim Tebow spoke to the media about how he handles his challenges and setbacks in trying to make the Major Leagues. Credit: Newsday / Alejandra Villa Loarca

PORT ST. LUCIE, Fla. — Tim Tebow, perhaps the most famous baseball player in the world, could have given up his second career in professional sports for several alternatives — the XFL, a start-up football league that has tried to woo him; his charity, the Tim Tebow Foundation; or hanging out with his new wife, Demi-Leigh Nel-Peters, a former Miss Universe who wed the Mets’ minor-league outfielder last month.

But Tebow is back for a fourth season of pro baseball and his third major-league spring training because he loves and remains dedicated to this game, he said. For now.

“It’s not something I want to do forever,” Tebow, 32, said Sunday at Clover Park. “There’s a lot of things I want to do that I’m also very passionate about.”

Tebow is slated to return to Triple-A Syracuse, where he toiled last year, his worst in baseball. He hit .163 with a .495 OPS, struck out in more than one-third of his plate appearances and missed the final month-plus because of a deep cut on his left pinky. It was the second year in a row that an injury ended his season early; he suffered a broken bone in his right hand in 2018.

And a new rule makes it more unlikely that Tebow will reach the majors. In September, rosters will be limited to 28 players, not the usual 40 of years past.

Among them: Maldives, a small island in South Asia, where during his honeymoon Tebow found a tennis instructor to flip him soft toss on a tennis court so he could get in his swings.

Tebow said he doesn’t and won’t measure his baseball success by whether he eventually makes it to The Show.

“You always have a goal of trying to get to the highest level,” he said. “There definitely have been some lows and some sucky times, but there’s also been some awesome times. It’s such a good picture of life. There’s a lot of ups and downs. It’s balancing them and handling them.”

Tebow said he “of course” has doubted himself at times during his baseball journey. Then he put on his motivational-speaker face.

“It’d be a lie to say no,” he said. “What do you do with that doubt? What do you do with uncertainty? Or what do you do when you feel like you’re struggling at something? That’s important, because we all have that in our lives in places and at times when we’re going through things — and ultimately, in a lot more important situations than sports.

“That’s when you have to go back to, ‘Why are you doing this? Are you having fun doing it?’ All of those things. And then have a mindset to continue to work, where you don’t let the doubt or uncertainty control your mind.”