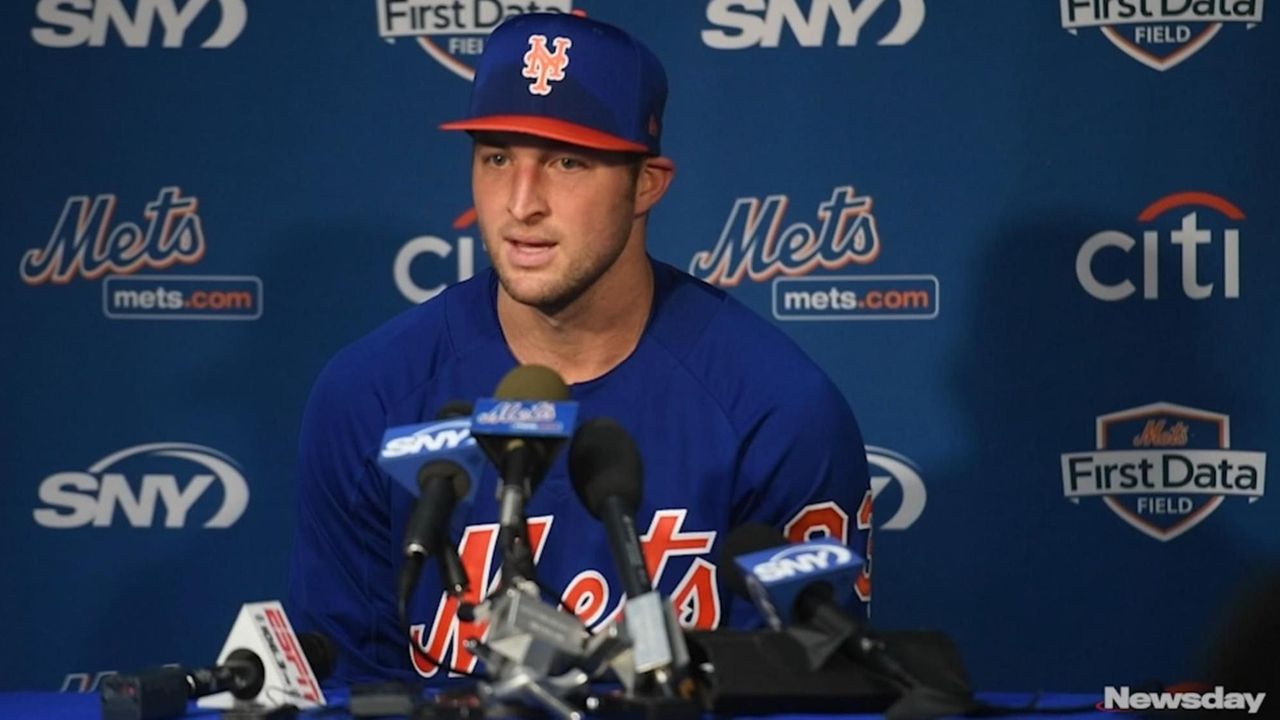 Former NFL quarterback and current Mets outfield prospect Tim Tebow says he's made a lot of adjustments to his body and swing to be ready for spring training during a press conference on Sunday, Feb. 18, 2018. Credit: Newsday / Alejandra Villa

PORT ST. LUCIE, Fla. — Sandy Alderson said it casually, as if he hadn’t just given rise to dozens of headlines and TV segments. Sitting beside him, the Mets’ newest pitcher, Jason Vargas, all but disappeared during his own introductory news conference. If it had been a movie, there might’ve been a record scratch, or maybe some dramatic music.

Did Sandy Alderson really just say that Tim Tebow will play in the major leagues?

Vargas’ introduction took something of a left turn Sunday when the Mets’ general manager made his surprising pronouncement. Asked about Tebow — who was set to address the media later in the day — Alderson said the Mets’ experiment with the former Jets quarterback and Heisman Trophy winner has “evolved” into something “more meaningful and [with] somewhat greater expectations.”

“This experiment is not going to last forever, but he’s made meaningful progress,” Alderson said. “Somebody asked me whether I think he’ll be a major-league player at some point. I think he will play in the major leagues. That’s my guess.”

He’s tweaked his swing in an attempt to be looser and more aggressive (a Baseball America scouting report indicated he had a stiff swing last year). He’s also been working on his defense, he said.

Despite what Alderson said, Tebow himself wouldn’t go anywhere near guaranteeing that he’ll be in the big leagues someday. It’s a nice thought, he said, but it won’t define whether or not this foray into baseball is successful. After all, before joining the organization, he hadn’t played organized baseball in about a dozen years.

“As an athlete, you always want to be the best you can — play at the highest level, win a championship, be the best,” Tebow said. “We don’t compete to have fun. We compete to win . . . I view success in being able to play the game I love every day, try to make the players and coaches around me better, have a great attitude, work and be the best I can.

“If the best I can be is in the bigs, that would be awesome. But if that doesn’t happen, I won’t look back and regret that I played baseball because I’ve already enjoyed it.”

One thing the Mets already are enjoying is Tebow’s leadership abilities. He spent the offseason working in orphanages and recently staged proms for disabled children. Despite his years in the glaring limelight, his character has remained unblemished, even by those who disagree with the team’s decision to bring him on board.

The fact that Tebow brings fans to minor-league games, Alderson said, isn’t the factor people think it is, because the Mets don’t benefit much from it.

“He benefits the Mets because of how he conducts himself,” Alderson said. “He’s a tremendous representative. We’ve been pushing him. There is a finite period of time for this to work. His commitment to the game has been exceptional, so we’re pushing him a little bit. He’s here in camp not because he brings some notoriety. He’s here because we want to push him a little bit and we think this is the best environment.”

The Mets brought Tebow to a major-league camp, Alderson said, so he could accelerate the process and potentially have him be major league-ready one day.

“He’s going to play” in spring training games, manager Mickey Callaway said. “We want to see what he can do. The person he is, the worker he is, those are the type of people you want around. We’re going to evaluate Tim Tebow the way we would anybody else. I think Tim Tebow is here because he can potentially help us at the major-league level at some point, and he wouldn’t be here otherwise.”

Although some outsiders may see this as an extended gimmick, there’s no doubt that Tebow does not. He was drenched in sweat when he came back in from his workout and said he lost 12 pounds during a hectic offseason as he worked to correct the flaws he saw in his game.

“I think other people questioned what I was doing here, but not me,” he said. “I think I got into this because I love it, I’m passionate about it, and I think for me, it’s being able to lock in and have tunnel vision regardless of what team I’m on. Wherever they decide to put me, I’m going to be able to lock in and give it everything I have.”

It just so happens that the Mets someday could decide to put him where few truly expected him to be: the majors.