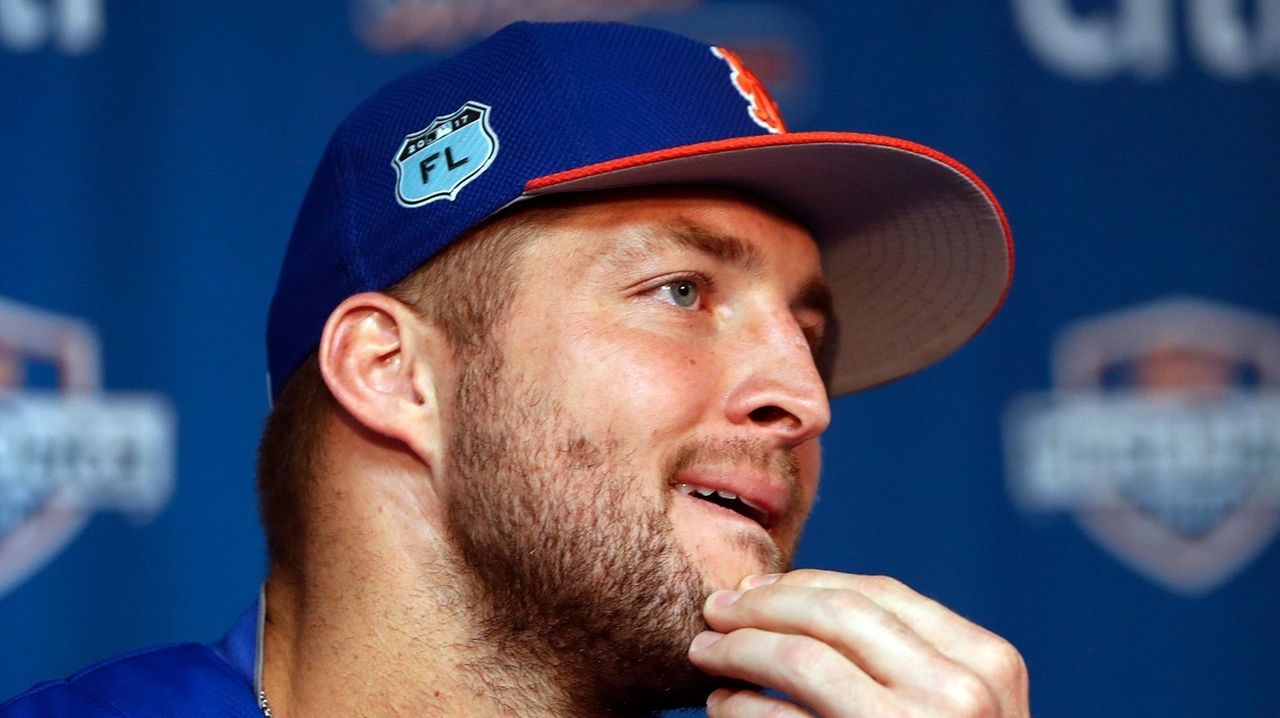 In his first spring training, former NFL quarterback and current New York Mets outfield prospect is focused on "what he can control" to reach his ultimate goal of making it to the big leagues. Credit: Newsday / Alejandra Villa

PORT ST. LUCIE, Fla. — Six months have passed since Tim Tebow began his daunting transformation from football to baseball. And as he sat in his No. 15 Mets uniform yesterday, he refused to share what he perceives to be his odds of ultimately making the big leagues.

But as Tebow began his first spring training as an outfielder, he hoped to put into practice the lessons he’s learned from some very accomplished tutors during the last three months.

“Gosh, I hope so,” Tebow said when asked if his work has moved him closer to the big leagues. “It’s why we put in the work. But also, that’s not just the ultimate goal. The ultimate goal is to be able to enjoy it every day, and I can honestly sit here before every one of you and say that I’ve had so much fun training, pursuing it, getting hits, striking out, whatever it’s been. Today is just the next step in that process and I’m going to enjoy that.”

On paper, he is just another player in minor-league camp, looking to move closer to an elusive goal. The odds already are against most who attempt a rise to the big leagues, and those probabilities are even more skewed against the 29-year-old former Heisman Trophy winner, who hasn’t played baseball since high school.

Of course, Tebow is anything but a typical hopeful, and vestiges of his past life popped up. He was even asked about his rocky tenure with the Jets. “Where did that come from?” he said, adding a dash of humor. “Been holding on to that one for three years?”

His aspirations go beyond the single-minded simplicity of his peers. His jerseys have been on sale around the complex. His first steps toward beginning his first workouts weren’t steps at all. Instead, a team staffer whisked him away in a golf cart.

The media swarm surrounding Tebow’s first spring training paled in comparison with his arrival for instructional league shortly after his signing in September. There were more cameras, to be sure, but it was a relatively low-key first day of work.

Even the crowd seemed to be smaller in scale. A few dozen fans, including one in a Tebow jersey, made their way to the back fields to watch him. Tebow ran, caught fly balls, then waited his turn at the cage during four rounds of batting practice. He hit nine homers, and a few of them jumped off his bat on a line.

Then he shagged fly balls, signed autographs, posed for selfies and jogged back to the minor-league clubhouse for extra work.

“I focus on what I can control: my attitude, my effort, my focus and trying to get better every single day,” Tebow said. “I’m not going to worry about what everyone’s writing, or what everybody’s thinking, or however I’m being marketed. I think for me, I just want to be able to continue the process, enjoy the process, enjoy every day, get to know my teammates and have fun out there.”

Process has become a buzzword for Tebow, and he viewed his arrival in camp as a mere continuation of it. After instructional league, he hit .194 in 19 Arizona Fall League games.

He spent part of his offseason with former Met Daniel Murphy. The two are from Jacksonville, Florida, and took to training at a complex at their homes.

“He’s kind of as much of an addict for sports as I am,” Tebow said. “Even Thanksgiving morning, we were out there hitting before he had to go back to his wife and his family.”

Tebow’s offseason work continued with Mets hitting coach Kevin Long. Tebow already has met David Wright and Curtis Granderson. And before the end of camp, there’s a good chance that he will play in a Grapefruit League game.

Said Tebow: “I’m excited about that opportunity to work for this and pursue it and in the meantime, hopefully make some people’s day by being able to give them a hug or sign an autograph or get a couple of hits, hopefully.”