Fans remembering 9/11 before a game between the Mets and the Marlins at Citi Field on Sept. 11, 2018. Credit: Kathleen Malone-Van Dyke

MLB will commemorate the 20th anniversary of the 9/11 terrorist attacks with a specially scheduled game: Yankees against the Mets at Citi Field on Sept. 11, 2021, a source said.

That is expected to become official when the 2021 schedule is released Thursday.

This will be the first time the Mets and Yankees play each other on that date, and it will be just the second time that they are both playing in New York City on Sept. 11. In 2014, the Mets hosted the Nationals and the Yankees hosted the Rays.

“I can't imagine how emotional and how powerful of an event that could be,” Yankees manager Aaron Boone said. “Especially all that we have gone through this year maybe adding another layer of just how potentially powerful and emotional of a game and a day and an event that might be. It’ll get the magic that it deserves.”

In the aftermath of the attacks on Sept. 11, 2001, both teams were visible in the healing process. Mets manager Bobby Valentine, and then some of his players, visited Ground Zero and exchanged hats with first responders. When sports returned to New York City on Sept. 21, Mets catcher Mike Piazza hit a go-ahead home run in the eighth inning against the Braves at Shea Stadium. The Yankees made it to the World Series against the Diamondbacks, and before Game 3 at Yankee Stadium, President George W. Bush — wearing a bulletproof vest under an FDNY sweater — delivered a strike in throwing the ceremonial first pitch.

Sept. 11 gained a renewed commemorative tone for the Mets last year. Pete Alonso — a rookie — gifted his teammates custom-made cleats depicting images of the American flag, the date of the attacks, “We will never forget” and lettering for the first-responder agencies involved. Alonso orchestrated that because MLB has not allowed the Mets to wear first-responder caps during games. He donated his shoes to the 9/11 Memorial & Museum. 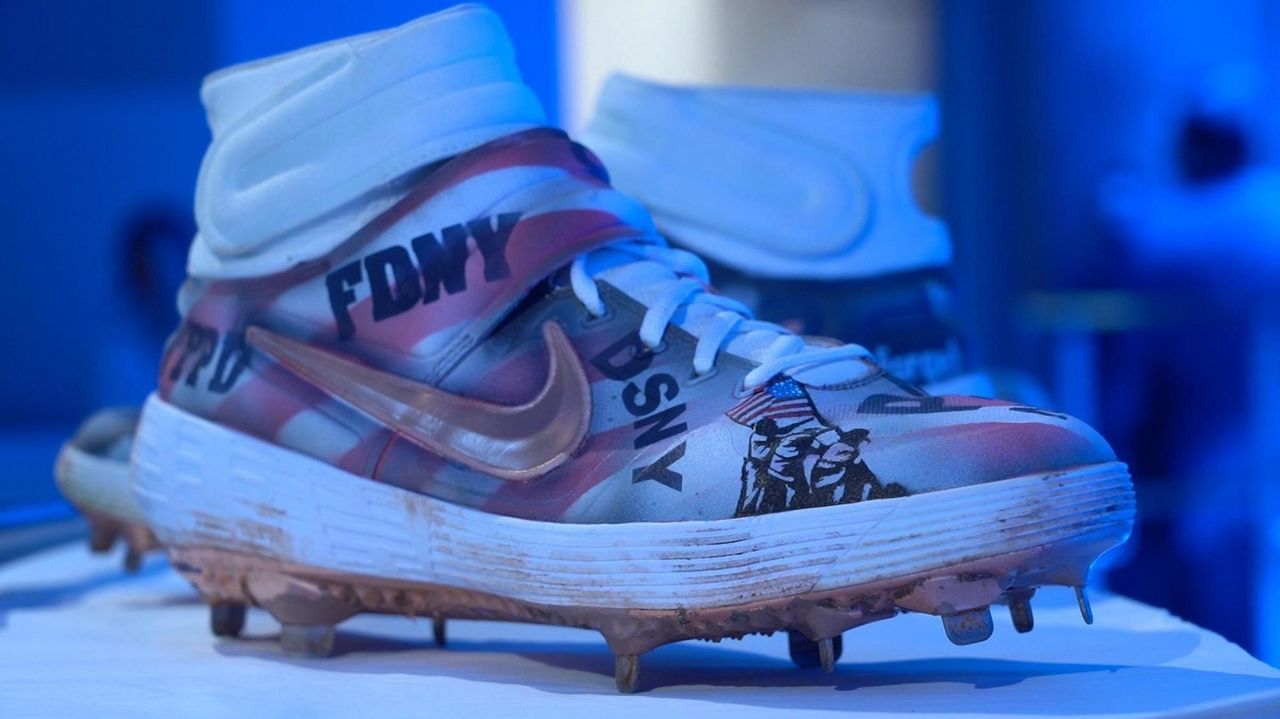 Mets' Alonso donates tribute cleats to 9/11 museum Pete Alonso, the Mets' rookie first baseman, donated his 9/11 tribute cleats that he and his teammates wore on the 18th anniversary of the terrorist attacks to the 9-11 museum on Oct. 1, 2019. Credit: Charles Eckert

Through the first 19 anniversaries — including this year's scheduled games — the Mets have played at home nine times, on the road seven times and been off three times. The Yankees have been home eight times, away nine times, and off twice.

The Mets are scheduled to visit the Blue Jays in Toronto on Sept. 11 this year. The Yankees will host the Orioles.