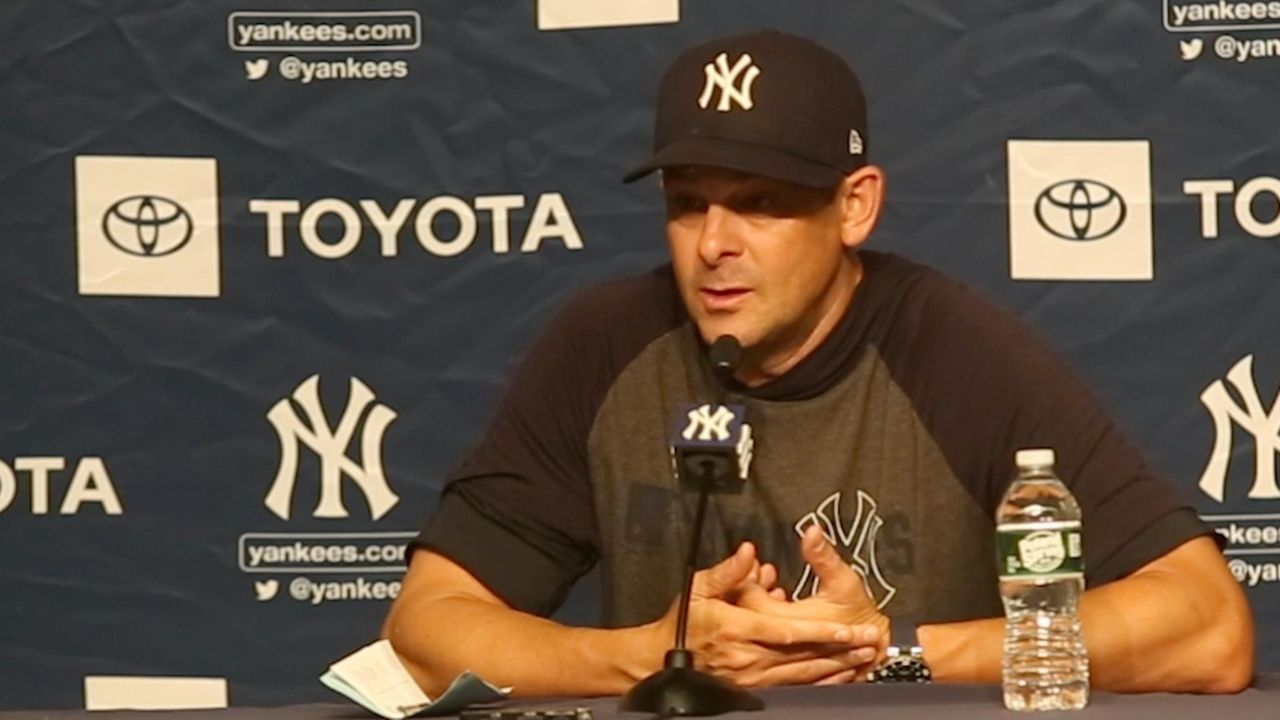 The Yankees swept a doubleheader from the Tampa Rays on Thursday night, winning the nightcap 5-1 and extending their lead in the AL East to eight games.  Manager Aaron Boone talked about how big these wins are against the second-place team in the division. Credit: Newsday / Casey Musarra

What a bunch of savages.

On the mound, in the batter’s box, in the division.

Especially in the division.

While the AL East won’t be clinched this month or next, the Yankees keep taking steps to drain that race of drama. On Thursday, they swept a doubleheader from the Rays at the Stadium, winning the opener, 6-2 — a game highlighted by Aaron Boone’s second-inning ejection that quickly became a social media sensation — and taking the nightcap, 5-1. 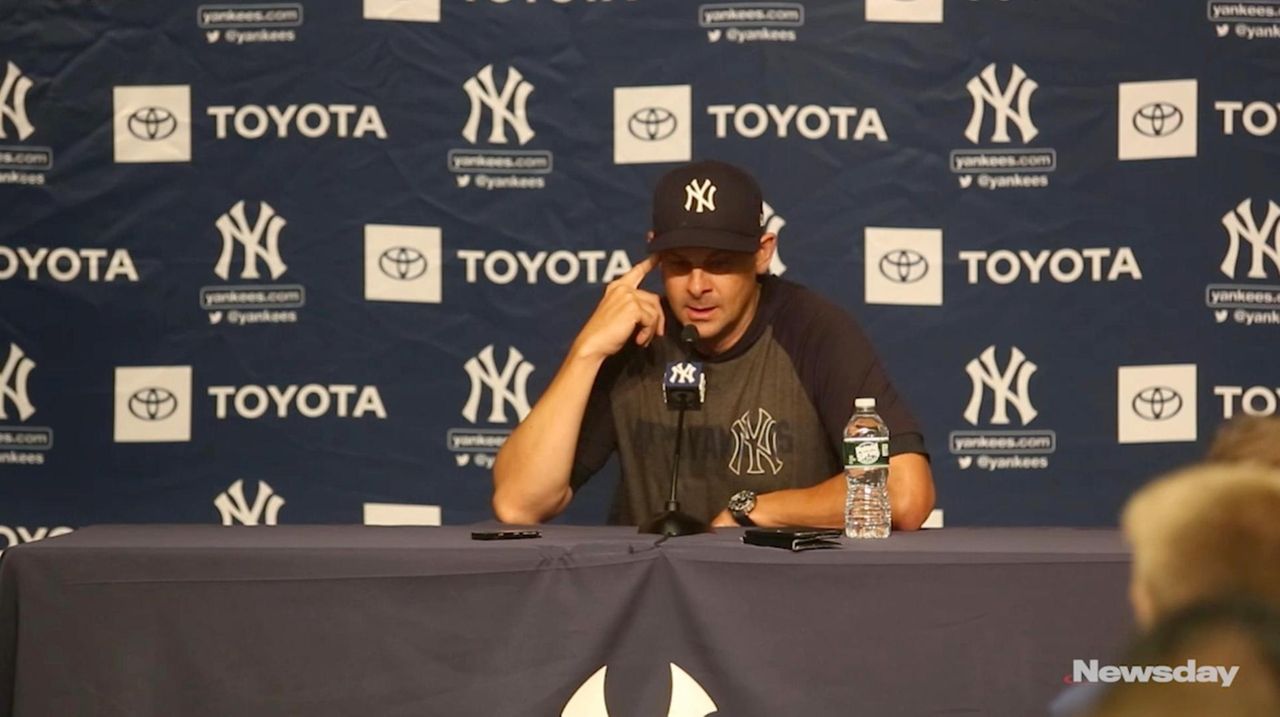 “Makes for a long day,” Boone said of the doubleheader beforehand, “but a chance to be a really good day, though.”

It was, as the sweep put the Yankees (62-33) seven percentage points ahead of the Dodgers for the majors’ best record and eight games clear of the Rays (56-43) in the AL East. They have a 34-11 division mark, including 12-5 against Tampa Bay.

“Gotta make it bigger,” Aaron Judge said of the lead. “Just have to keep separating ourselves.”

The Yankees bounced back from Monday night’s stunning loss  to the Rays – in which Travis d’Arnaud’s third homer of the game, a three-run shot off Aroldis Chapman in the ninth inning, gave Tampa Bay its third straight victory over the Yankees – to win the final three games of the series.

In the opener, Domingo German shook off homers by the game’s first two batters, Austin Meadows and Yandy Diaz, to pitch six strong innings. Gio Urshela went 3-for-4 with a homer and three RBIs and improved to 23-for-61 (.377) with runners in scoring position. 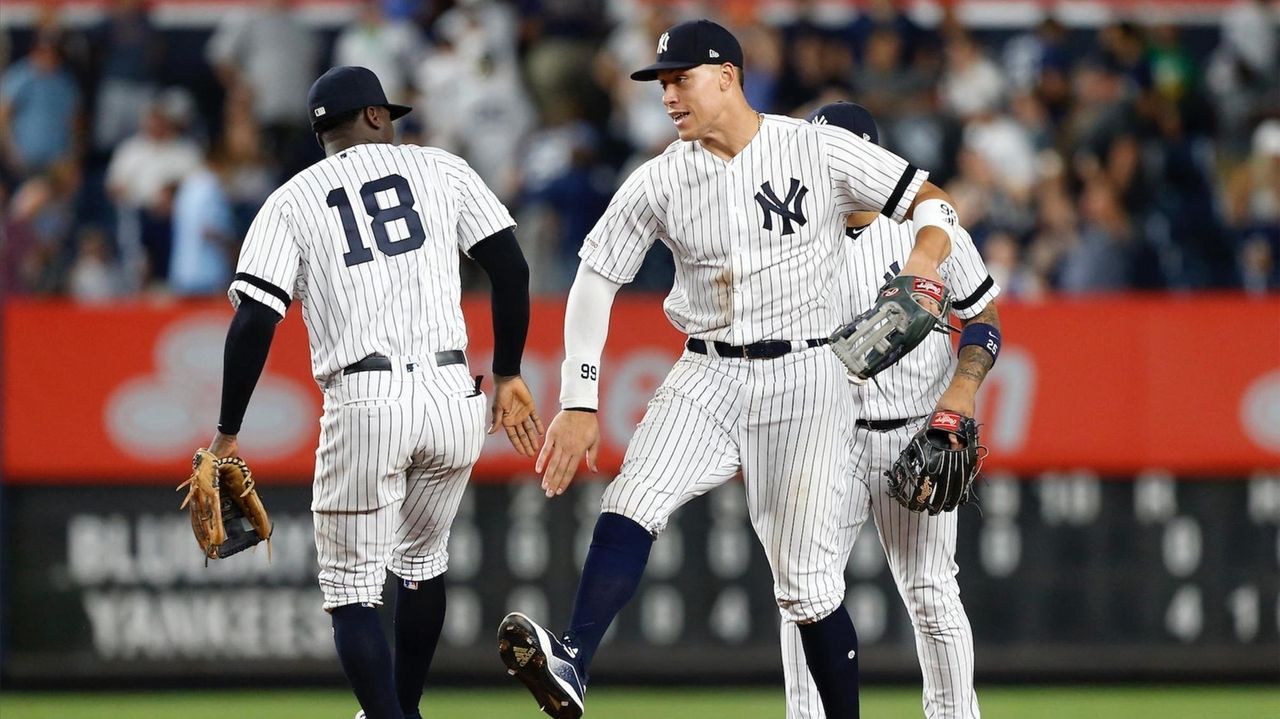 “It gave me a boost,” German said of Boone’s boot at the hands of plate umpire Brennan Miller, a minor league call-up who made his big-league debut in April. “To go out there and do my job and try to get this victory for him because he went out there and fought for us.”

Said Judge: “That shows that he’s in the trenches with us. He’s living and dying on every single pitch and has our back. He saved, I think, maybe Gardy [Brett Gardner] and a couple people from being thrown out, so that’s a good thing.”

The Yankees went the opener route in Game 2, with Chad Green escaping a bases-loaded, none-out jam in the first. They got a home run from Luke Voit, his first since June 14, to tie it in the fifth against Charlie Morton. Then they sent 10 to the plate in a four-run sixth that featured a bases-loaded balk that broke a 1-1 tie and a two-run single by Didi Gregorius.

“He continues to show you why he’s become such a good pitcher,” Boone said.

Urshela’s two-run homer off Yonny Chirinos in the second tied it at 2, but his ninth home run was overshadowed by the theatrics of Boone, who was upset with Miller’s strike zone.

Miller punched out Gardner for the second out of the inning on a borderline pitch, and Gardner responded by nearly dislodging part of the dugout roof, repeatedly driving his bat into it. Boone was ejected while in the dugout after a close pitch put DJ LeMahieu in an 0-and-2 hole.

Microphones nearby picked up much of Boone’s colorful, expletive-peppered rant, which included referring to his players as “savages” in the batter’s box.

“Certainly didn’t want anyone else getting tossed,” Boone said. “We were pretty heated there, several of our guys there in the first couple innings, so I just felt it was necessary in that spot to take the attention off some of the other guys.”

Gardner did not think he would have been ejected, but still appreciated his manager’s response. “It gets us fired up,” he said. “It doesn’t go unnoticed.’’

Of his bat attack on the dugout, Gardner, who split his lip firing his helmet in the dugout after a strikeout in Cleveland last month, smiled.

“I was just making noise,” he said. “I can’t throw my helmet anymore. Just being me, I guess.”

Lennon: Boone's 'Savages' tirade fires up YankeesThere is nothing that players and fans appreciate more than seeing their own manager go ballistic on an umpire. What earned Boone extra credit was the creative language. Yankees vs. RaysThe Yankees beat the Rays, 6-2 and 5-1, in the third and fourth games of ...