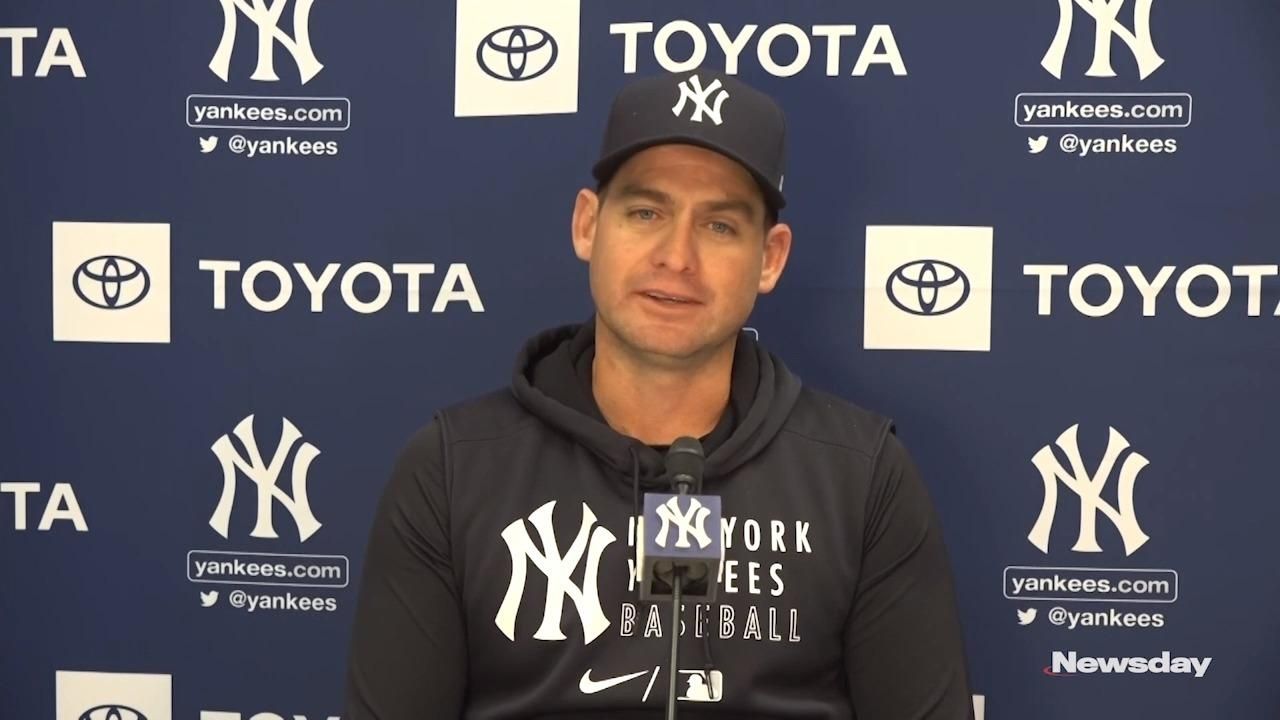 Yankees bench coach Carlos Mendoza takes on managerial duties with Aaron Boone out on medical leave during spring training. Mendoza shared the nature of a conversation he had with Boone after surgery on March 4, 2021. Credit: New York Yankees

CLEARWATER, Fla. — It was only a few hours after his pacemaker had been put in, but Aaron Boone rang up his bench coach from his hospital bed.

"I spoke with him [Wednesday] night on the way home," Carlos Mendoza said Thursday morning. "As soon as he called, got on the phone, first question was, ‘How did the boys look?’ "

Mendoza smiled as he recalled the conversation.

"So [that] tells you what type of leader he is. He’s in the hospital, he’s in bed, just got out of surgery, and he just wants to know what’s going on here with our guys, what’s going on in that room."

Boone spent Wednesday night at St. Joseph’s Hospital in Tampa after having the surgery earlier in the evening, and the team said he was released Thursday.

Mendoza managed the Yankees in Wednesday night's 4-1 victory over Toronto and Thursday afternoon’s 15-0 loss to the Phillies at BayCare Ballpark. The bench coach — highly regarded by both the Yankees and increasingly by rival organizations — will manage the club in Boone’s absence until the fourth-year manager is cleared to return.

In a statement released by the team early Wednesday afternoon, Boone said he anticipated that return being "in the next several days," something experts said is realistic.

"Absolutely," said Joseph Germano, DO, the director of cardiac electrophysiology at NYU Langone Hospital-Long Island. ''[Patients receiving pacemakers] should be back to pretty much normal activity within a few days, especially someone like Aaron Boone. If he was a moving man or somebody where he had to lift heavy items or something like that, or if he was actually one of the athletes, that might be different. But for a manager, he should be back in a few days and he should be fine."

Is the day-to-day stress that generally is a part of the job of a big-league manager a potential concern?

"Not at all," Germano said. "I really don't think that kind of stress would necessarily correlate to anything he would need [to worry about]. He might be a little tired just from surgery, the anesthesia, but aside from that, he should be fine to pretty much be back to work."

Germano, who estimated he’s done "several thousand" procedures involving cardiac devices, including pacemakers, said doctors keeping tabs on Boone in the coming weeks and months won’t be an issue either — even with the itinerant lifestyle of those in baseball.

"These are all remote monitored now," he said. "You can, of course, check them in person, but also I would say that the majority of our patients we have on remote monitoring. So depending on the device he has, his pacemaker can communicate with us either via his cellphone, a smartphone or a small device he puts at his bedside. So when he's on the road, etc. [doctors] can still be able to watch him and make sure that the pacemaker is functioning normally and if he has any new symptoms, [they] can evaluate him remotely."

Boone buoyed the spirits of just about everyone in the organization Wednesday in video messages he sent, and players returned the favor.

"We had a team meeting about it, and we had a couple of coaches explain what was going on," Luke Voit said Thursday. "Most of us, obviously, knew he had that heart condition [Boone had heart surgery in 2009]. We didn't realize how serious things were going and we wanted to send a video to him. We had Gardy [Brett Gardner] send it and we all said something at the end.

"So we wanted to keep him positive, know that he has plenty of time, it’s spring training, to get right before he comes back and helps lead us to a championship."

Isles' COVID-19 outbreak could have long-term effect on team
Knicks shift focus to Nets after big win in Atlanta
Jets defense covers for Wilson in win over Texans
Giants' defense comes up big in win over Eagles
Harden's identity crisis: Facilitator or scorer for Nets?
Brown back for Nets, but Nash going with Bembry against Suns
Didn’t find what you were looking for?