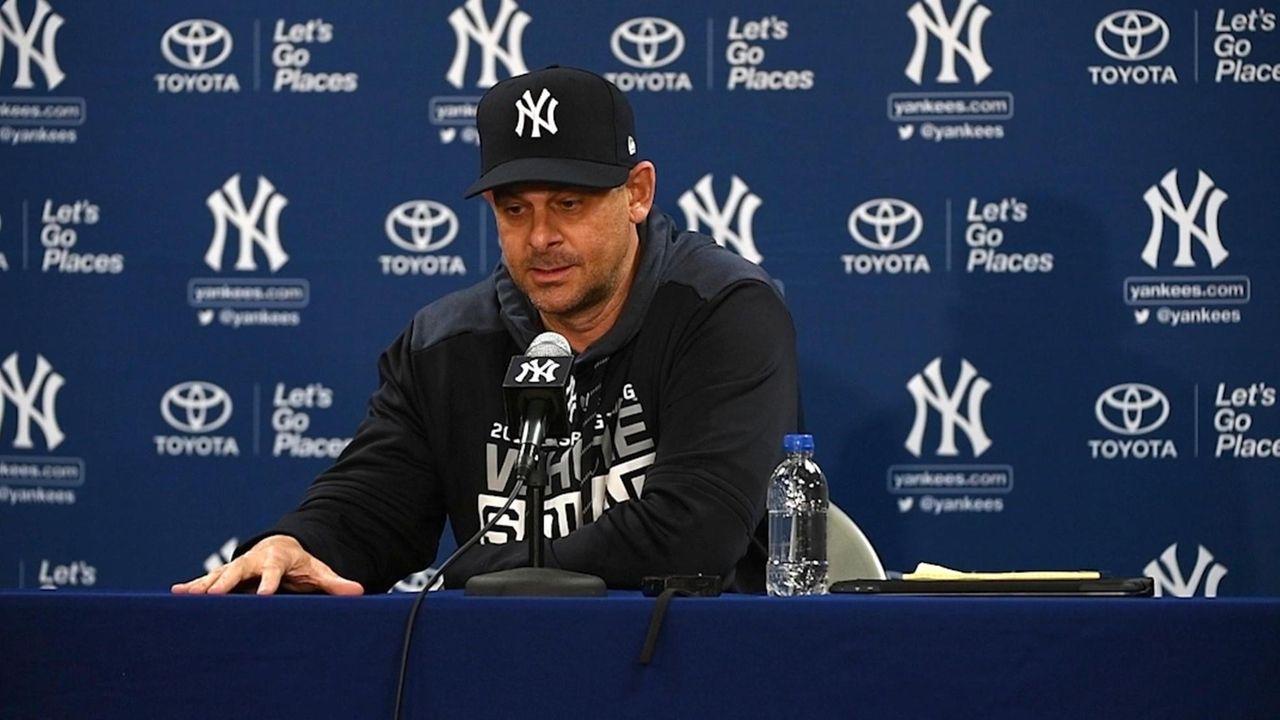 On Wednesday, Feb. 13, 2018, Yankees manager Aaron Boone discussed the upcoming season, saying there are tremendous expectations for the club given the roster of players at his disposal.  Credit: Newsday / Thomas A. Ferrara

“Expect to go out there and be great,” Boone said then.

The Yankees were at times during the 2018 season, going 100-62, but it wasn’t good enough. The Red Sox won the AL East by eight games and beat the Yankees in four games in the Division Series en route to a fourth World Series title since 2004.

The Yankees come into 2019 with the same World Series expectations and, Boone acknowledged, the organizational feeling is “on paper” this edition of the club is better than last year’s.

Aaron Boone on his goals for 2019: "Hopefully this year we can get to the top of the mountain." #YANKSonYES pic.twitter.com/0FflL75hkf

Aaron Boone on Gary Sanchez: "I think he's going to have a great year for us on both sides of the ball." pic.twitter.com/biwlLNJ7Gx

Aaron Boone on the hype surrounding his Yankees team: Talk is cheap ... Now we've gotta go out and do it. pic.twitter.com/xFbG6yTuq0

Miguel Andujar will play "entirely third base" for the Yankees in 2019, Aaron Boone confirms. pic.twitter.com/cWNtpNfM3X

"There's a very good chance" that Luis Severino will be the Opening Day starter this year, Aaron Boone says. pic.twitter.com/NALLUywdj4

So his message when he talks to the full group after position players report next Monday won’t be much different.

“There’s no question, we’ll embrace those expectations,” Boone said Wednesday after  pitchers and catchers reported to Steinbrenner Field. “I think everyone that’s been here a while, and certainly the new guys coming in, I think understand what goes along with having the kind of club we potentially have, that the expectations are great. We welcome that. Hopefully this year we can get to the top of the mountain.”

The Yankees believe their rotation is better than in 2018, having added James Paxton to go along with Luis Severino, Masahiro Tanaka, J.A. Happ and CC Sabathia. A strong bullpen should be stronger with the retention of Zack Britton and addition of Adam Ottavino.

There appears to be better position player depth, too. Shortstop Troy Tulowitzki – injury prone in recent years, but who as of now is healthy – should be adequate in place of Didi Gregorius, who is out until at least June after Tommy John surgery. And if Tulowitzki is not the answer, Gleyber Torres can shift to short and the slick-fielding DJ LeMahieu goes to second.

“I feel like Brian [Cashman] and his staff have done a great job of adding reinforcements,” Boone said.

How much of a rebound season Gary Sanchez has will go a long ways toward determining how much better the Yankees will be. Sanchez had a miserable 2018, hitting .186/.291/.406 with 18 homers and 53 RBIs and leading the majors with 18 passed balls (accomplished in 89 games because of two DL stints caused by a right groin strain).

A slimmer Sanchez, whom Boone visited with at his offseason home in the Dominican Republic during the winter, showed up weeks ago at the minor league complex.

“There’s a real hunger to go out and show the world what a good player he is,” Boone said. “That’s what feels palpable to me about him right now and where he’s at, not only physically … but I think mentally I feel he’s ready to go out and in a lot of ways take charge.”

Notes & quotes: Lefthander Jordan Montgomery, who underwent Tommy John surgery last June and who recently began a throwing program, said he hopes to be back in the majors by June. Given the 12-16 months it takes most to recover from Tommy John – and it’s usually in the 16-18-month range for pitchers – that’s unlikely. The Yankees are not counting on Montgomery, 26, being a factor in 2019  . . . Boone indicated righthander Luis Cessa, who is out of options, “might be ticketed” for a bullpen spot should he have a good camp…Boone said the Yankees “probably” will take 13 pitchers out of camp and utilize a 13-man staff much of the season…The Yankees invited lefty Phillip Diehl, who ended last season with Double-A Trenton, and RHP Trevor Stephan, who finished 2019 with Double-A Trenton, to camp. That upped the total to 23 (12 pitchers) non-roster invitees.

Azeez Ojulari impressing Giants in first camp
LI's Capobianco advances to Olympic diving semifinals
Darnold excited to play Week 1 because of fans, not Jets as his opponent
Sheldon Rankins: Jets' D-line will wreak havoc on QBs
Giants' Looney on laps: 'I loved it'
Toney and Barkley inching forward at Giants camp
Didn’t find what you were looking for?