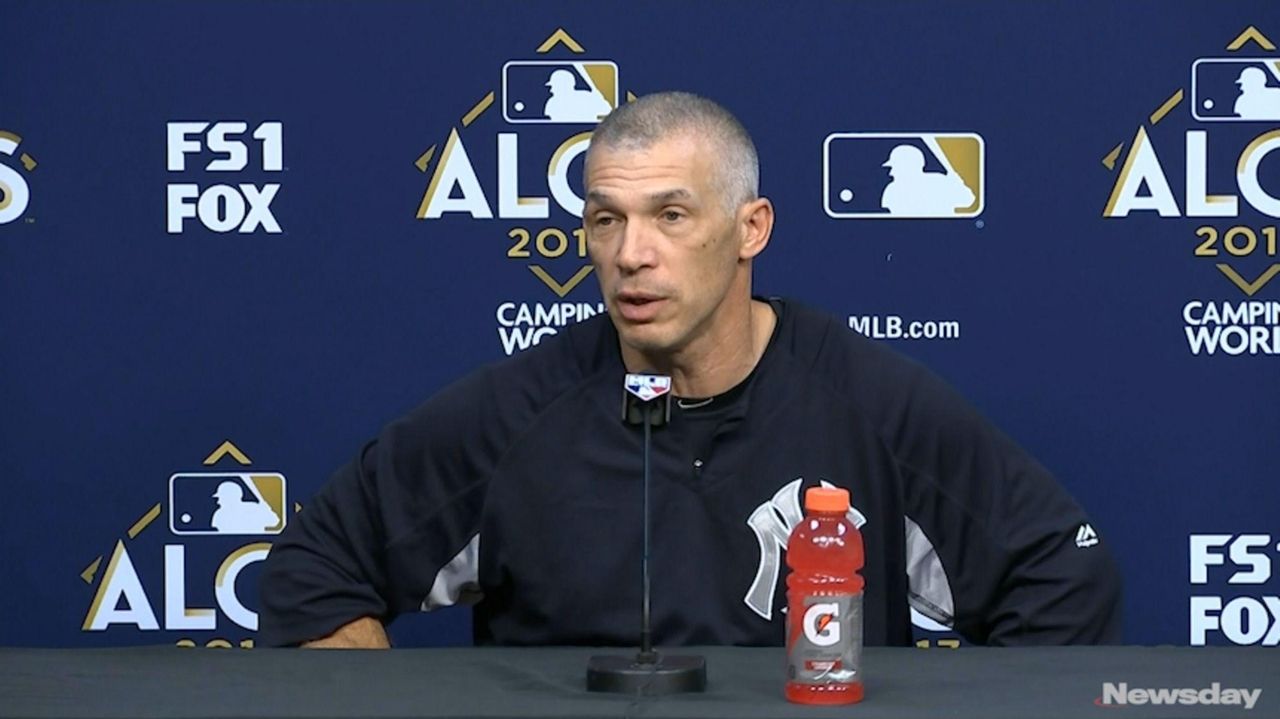 Yankees manager Joe Girardi said opposing pitchers are being careful with outfielder Aaron Judge, and first baseman Greg Bird said he wants to be in the lineup no matter who's pitching before Game 2 of the ALCS against the Astros on Saturday at Minute Maid Park. Credit: News 12 Long Island

Judge and Sanchez went a combined 0-for-8 with four strikeouts (two apiece) against Justin Verlander, who allowed five hits and struck out 13 in a remarkable 124-pitch complete game.

Judge and Sanchez are 1-for-14 with eight strikeouts in the two ALCS games. When asked about his young sluggers’ struggles, manager Joe Girardi keeps talking about how tough the opposing pitchers are. Indeed, Verlander was really dealing, just as Dallas Keuchel was the night before.

Judge and Sanchez were involved in the game’s final play, when Jose Altuve scored from first on a double to right-center by Carlos Correa. Judge cut the ball off and threw it in to Didi Gregorius, who short-hopped a throw to Sanchez that the catcher couldn’t handle.

While Judge and Sanchez were peppered with questions about the walk-off play, it did not go unnoticed that the Yankees could have been in a much better position in the ninth inning if their No. 2 and 4 hitters had done the kind of damage they did in the regular season, when they hit a combined 85 homers.

“The focus is always the same when you go out there to hit,” Sanchez said through a translator. “Right now I’m not getting the results I want, but I’m confident in myself that I’ll be able to contribute going forward. Definitely I’ve missed pitches that I should have been hitting and there are some bad pitches that I swung at.”

Judge is 1-for-7 with a walk and three strikeouts in the ALCS. Altuve, his AL MVP rival, is 5-for-8. But Judge said he doesn’t feel any special pressure to carry the Yankees’ offense.

“It’s a team game,” he said. “It’s all 25 on us pulling on the same rope. This whole year we’ve always picked each other up.”

It also doesn’t help the Yankees that their designated hitters (Chase Headley, Jacoby Ellsbury, Matt Holliday) are an almost-impossible-to-fathom 0-for-27 in the postseason after Headley went 0-for-3 on Saturday.

Other than deciding which ice-cold veteran to use as the DH, Girardi said he is not contemplating any lineup changes for Monday night’s Game 3 at Yankee Stadium against Houston righthander Charlie Morton.

“I’m going to stick with the same lineup because things can turn really quickly,” Girardi said. “There’s a lot of guys that struggle in the postseason. That’s just what it is. If you just start moving people around trying to play a hot hand, it doesn’t necessarily work. They will have a day off and they will get back on track.”

Aaron Judge and Gary Sanchez have struggled in the ALDS and ALCS. Their combined numbers:

DeGrom on back issue that sent him to IL: 'This is minor'
Rieber: Positive test for Yankees coach a dose of reality
No LeBron for Lakers, but surging Knicks don't care
Lennon: Mets right in taking precautions with Jacob deGrom
Nets seek final tuneup for James Harden
Yankees third base coach Nevin tests positive for COVID-19
Didn’t find what you were looking for?