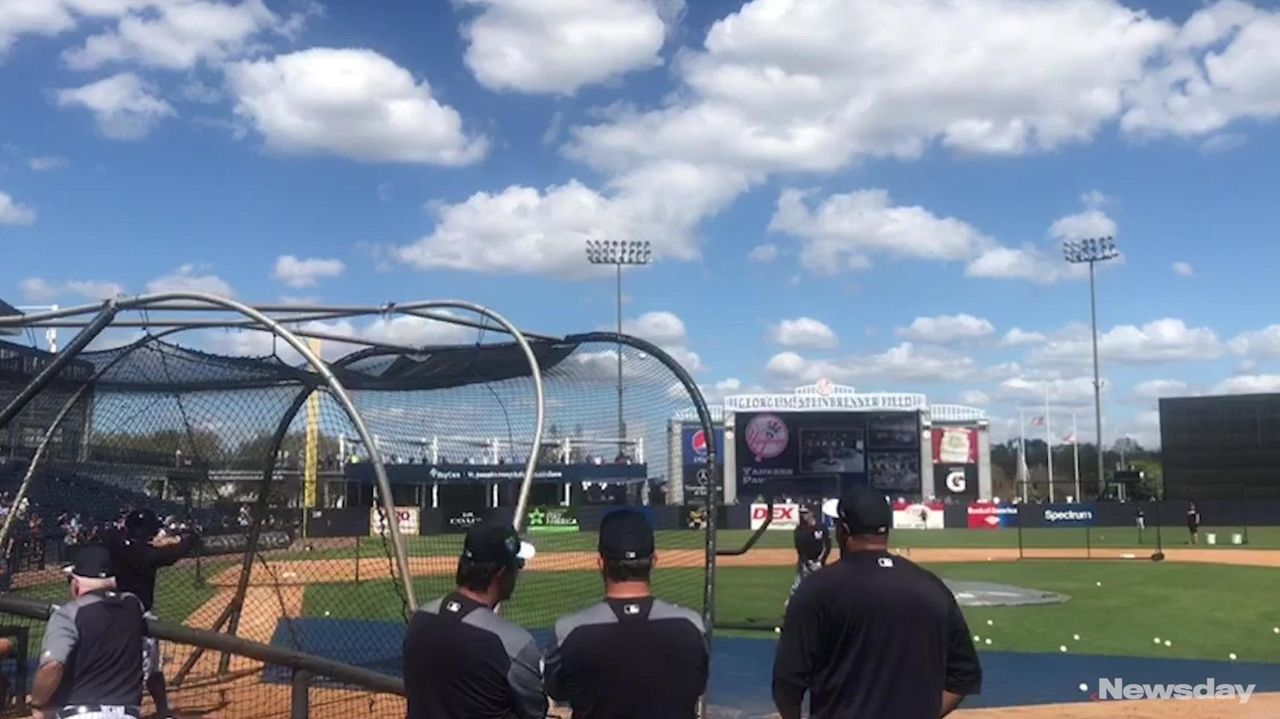 On Monday, February 19, 2018, Yankees outfielder Giancarlo Stanton took the field for the first time in spring training and hopes he meshes well with his teammates. Credit: Newsday / Thomas A. Ferrrara / Erik Boland

TAMPA, Fla. — It likely was the most hyped and documented first-day-of-spring-training batting-practice session in some time.

And while neither Aaron Judge nor Giancarlo Stanton put on the kind of show that the approximately 2,000 fans and media — almost all equipped with camera phones, it seemed — were looking for Monday afternoon at Steinbrenner Field, this needs to be said leading off:

It matters not in the least.

Counting batting-practice home runs, and affixing importance to said number, is akin to tallying shots made in an NBA layup line or projecting the Masters winner based on a long-drive contest.

But the number wasn’t the point Monday. The palpable excitement about the season was, anticipation that figures to increase as Opening Day in Toronto on March 29 approaches.

One of the main reasons: the presence of Judge and Stanton in the same lineup and the damage the pair figures to inflict on baseballs throughout a season.

“The fans, the moment we touched the dirt [walking out of the dugout], they were buzzing and ready for us to get in the cage,” Stanton said. “That was really cool. Like nothing I’ve ever experienced in the spring.”

That’s not a surprise. Stanton spent the first eight years of his career with the Marlins, who never won more than 80 games in a season while he was there. But, generally speaking, there hadn’t been this kind of buildup for the Yankees’ first full-squad workout since 2010, when they took the field three months after winning the World Series.

“We’ve been excited for this day for a long time,” new manager Aaron Boone said. “I’d be lying if [I said] you don’t get the juices flowing a little bit when they walk out and share a group together. It was a little bit of a rush.”

For the record, Judge and Stanton both had their moments during the BP sessions. Judge’s most impressive blast was a shot to left that departed the stadium, and Stanton blasted a moonshot that hit near the top of the scoreboard in left-center. But overall, Gary Sanchez had the hardest hits of the quartet — in what seemed like an oddity, Jacoby Ellsbury rounded out the group — and Stanton joked that he spent much of his four rounds “playing pepper” with the cage.

Afterward, Judge acknowledged the “buzz” created by the spectacle of the two sluggers hitting together, but he said it’s all about getting the necessary work to be ready for the regular season.

“I’m locked in on my work. Everyone’s locked in on their work,” said Judge, who took his first round of full outdoor BP since undergoing arthroscopic surgery on his left shoulder in November.

Each player said he wasn’t tempted to alter his approach in an attempt to hit more home runs.

“I just focus on doing my job,” Judge said. “My job is to barrel up the baseball as many times as I can. I have to stick to my routine whether there’s zero people in the stands or if it’s packed. I still have to work on certain things so I can go in the game and perform how the fans want us to.”

Said Stanton: “I know they’re here for the entertainment, but we have to get our work in” for the “main entertainment” of the 162-game regular season.

With a smile, Stanton said he still feels like a “deer in headlights” with his new team but has been put at ease with the talent in the clubhouse.

“You’ve got All-Stars all over the place, future All-Stars, future MVPs,” he said. “It’s a great clubhouse, a great group of guys. I’m just here to mesh with them.”

Brown back for Nets, but Nash going with Bembry against Suns
Knicks and Hawks going in different directions
Silverio's 28 points lead Hofstra past Detroit Mercy
Gross: Should NHL have postponed Isles games earlier in outbreak?
Suns' success mirrors Nash's time in Phoenix
NHL postpones at least two Isles games due to COVID-19 outbreak
Didn’t find what you were looking for?