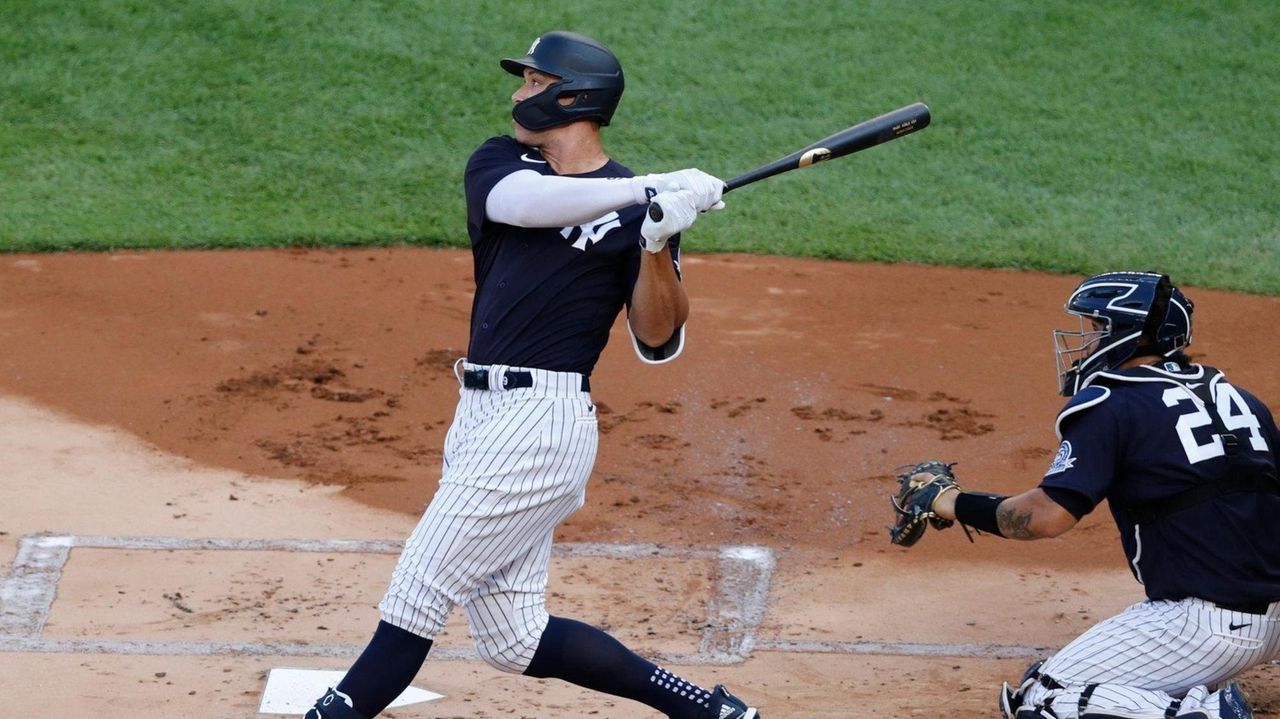 Aaron Judge would seem to be in the clear.

The rightfielder, scratched last-minute from Saturday night’s intrasquad game because of a stiff neck, returned to the lineup Wednesday night.

And he homered on the second pitch he saw from lefthander James Paxton, taking the lefthander’s delivery into the netting above Monument Park in center (Giancarlo Stanton homered to left in the same inning).

“Glad I’m not facing those guys all the time,” Paxton said afterward.

Said Aaron Boone of the homer: “It's always nice to see the big fella go out the front door."

Judge, who had not gone through a full workday on the field since being scratched Saturday, hit second and started in right for the “Yankees” in the intrasquad matchup vs. the “Bombers.” He finished 1-for-3 with a walk and played the entire game in the field.

“No issues, no nothing,” Judge said after the game. “Still not 100% but good enough to play. We’re all good. I’m not too concerned about a stiff neck.”

Much earlier in the day Judge, after a full round of batting practice and taking some balls in right, was declared ready to go, allowing the Yankees to exhale a bit.

Though the Yankees never felt the stiff neck would be a long-term problem, a variety of injuries have kept Judge off the field the last two years. He was limited to 112 games in 2018 and 102 games in 2019 and missed the vast majority of spring training this year because of lingering pain from the right rib fracture and collapsed lung he suffered last September.

Boone said Paxton will start the second game of the season, July 25 in Washington against the Nationals. Gerrit Cole, of course, is slated to pitch the opener July 23.

Masahiro Tanaka, who suffered a concussion July 4 when he took a Stanton liner off his head during a simulated game, has been symptom-free since being released from the hospital that night, will throw a bullpen session Thursday.

Mask up, or not

Backup catcher Kyle Higashioka is choosing to wear a face covering during workouts and games. Gary Sanchez, like most of his teammates when it comes to baseball activity, is not.

“I'm kind of in close vicinity with a couple other people [the hitter and umpire], so might as well throw the face covering on just in case,” Higashioka said. “This one . . . it’s nice, cool material so it doesn’t really hinder me.”

Sanchez said “maybe in the future when it gets a little cooler” he might wear one.

“As of right now it’s just a little too [hot],” Sanchez said through his interpreter. “It's hard for me given how hot it gets out there on the field.”