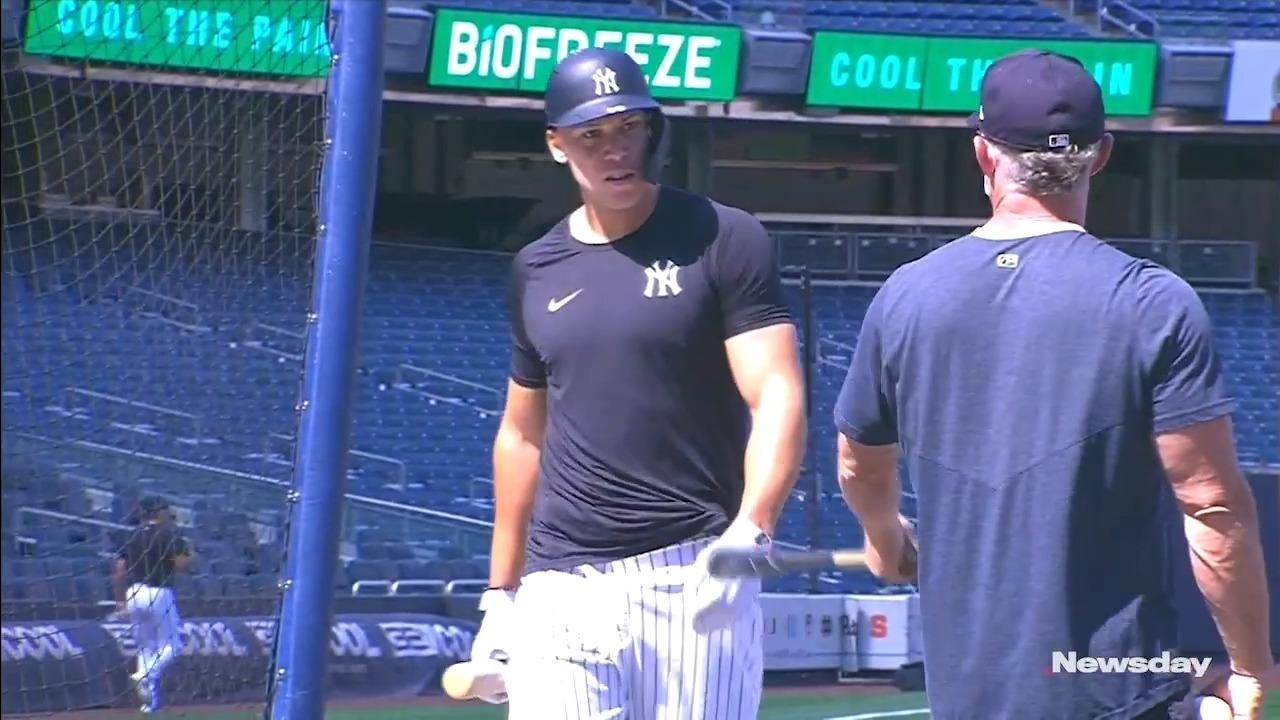 Yankees manager Aaron Boone discusses Aaron Judge's neck ailment and whether or not he'll be ready for Opening Day next week during availability on Tuesday, July 14, 2020. Credit: YES Network

Aaron Judge didn’t play in Tuesday night’s intrasquad game, but there was tangible progress for the rightfielder and the stiff neck that had kept him off the field since being scratched from Saturday night’s instrasquad contest.

Judge, after receiving treatment on the neck earlier in the day Tuesday, took batting practice outside with the rest of his teammates, then headed to rightfield to shag some fly balls.

“I haven't talked to him (yet) but, yes, when he came in today, I think there was improvement,” Aaron Boone said about three hours before Tuesday’s game.

Judge, 28, missed most of spring training dealing with lingering pain and discomfort caused by a right rib fracture and collapsed lung. The outfielder had no chance to be ready for the originally scheduled March 26 season opener in Baltimore but the hiatus caused by the COVID-19 pandemic allowed Judge to get healthy, and all indications remain he should be OK for the new opener, July 23 at the Nationals.

“The weeks leading up [to summer camp], he was really starting to be able to get after it a little bit [in Tampa] and his response to that — being ramped up and letting it go from a swing standpoint — was really encouraging,” Boone said. “The amount of reps he's gotten out here…he's been one of those guys that before camp even opened [July 4] and [Gerrit] Cole was here that first day [July 2], he was able to get live at-bats [against Cole]. So he's done a lot of work off the high speed machines and things like that, so I feel really good about how much he's been able to build up. He's played a number of innings in the field, so I feel like he's in a good spot moving forward to be to be ready to go opening day.”

Michael Kay and David Cone will call the bulk of Yankees games on the YES Network this season, doing so on-site at Yankee Stadium, with Paul O'Neill likely to join remotely from Cincinnati. For most road games, Kay and Cone will work off monitors at YES' studios in Stamford, Connecticut. YES' announcers will call all three exhibition games this weekend from the Stadium, including the one being played across town at Citi Field. The Yankees' radio team of John Sterling and Suzyn Waldman is expected to call both home and road games from the Stadium, the latter off monitors.

Red Sox end German's no-hit bid, score five in eighth to defeat Yankees
USA’s Olympic men’s basketball win streak stopped at 25
Lennon: Where do Mets sit as far as remaining on top of NL East?
Lennon: Yankees have to be buyers, and this win backed that up
Derek Jeter's life beyond the field
Walker shelled again as Blue Jays rout Mets
Didn’t find what you were looking for?