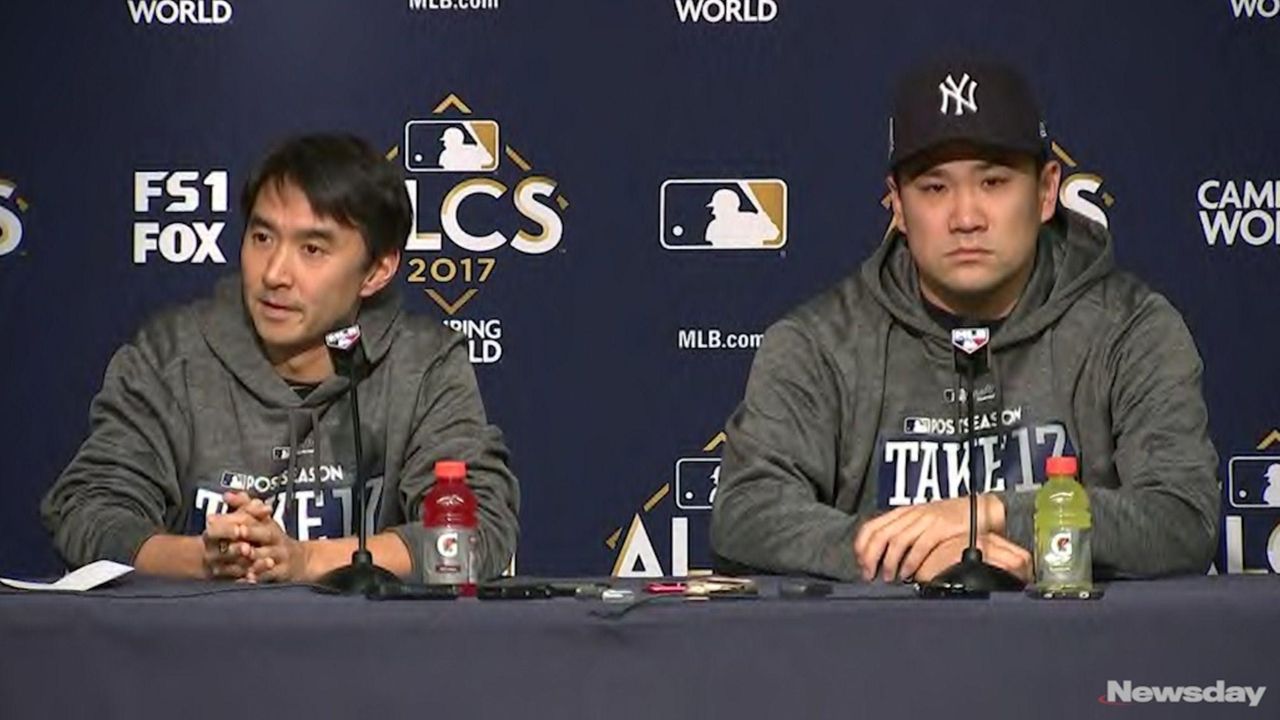 Yankees starting pitcher Masahiro Tanaka is ready for his biggest game since coming to the major leagues four years ago. Tanaka says his years pitching in Japan has prepared him for his Game 5 start in the ALCS on Wednesday, Oct. 18, 2017. Credit: MLB

With all the talk centered around Dallas Keuchel start against the Yankees Wednesday evening in Game 5 of the American League Championship Series, Yankees starter Masahiro Tanaka has gotten something of the short shrift.

“Well, one, he’s a very good pitcher,’’ the Astros righthander said Tuesday. “And if it weren’t for some extraordinary performances we’d be singing his praises multiple times. When I’ve pitched against him in the regular season and in the postseason, it’s a feeling that you have to be on top of your game because there’s not going to be a lot of runs produced from our part. That brings a challenge in itself. But he’s handled this media, this city, this team very well. And that in itself is pretty impressive, too.’’

Tanaka lost to Keuchel, 2-1, in Game 1 of the ALCS. He also lost in the wild-card game to Keuchel in 2015. Tanaka will be pitching on four days’ rest.

How the Yankees ALCS roster was built

“Yeah, I feel comfortable pitching with four days rest,’’ he said through a translator on Tuesday. “Obviously I’ve done that through the season. And on top of that, I’ve been here for four years and done that, as well. So, yes, I do feel comfortable.’’

When asked what has been the toughest adjustment pitching on shorter rest than he did in Japan, where teams have six-man rotations), Tanaka responded, “I feel like it’s not something that I should be explaining into detail at this point in time. But I’ve been here for some time and I’m not even conscious about that anymore.’’

Tanaka usually sits quietly by his cubicle, but said he is a part of the Yankees experience.

Tanaka was 13-12 with a 4.74 ERA in the regular season but finished strong down the stretch. He started the Yankees’ comeback against the Indians in the ALDS by shutting them out over seven innings in a 1-0 victory.

Each postseason start for Tanaka could be his last for the Yankees. After the season, he can can opt out of the seven-year, $195 million contract he signed in 2014. Tanaka has not budged from his stance that he will not address the matter until the season ends. The Yankees and his agent, Casey Close, have not commented.

Keuchel has thus far been impenetrable for Houston against the Yankees.

Here’s what Keuchel has done against the Yankees:

— A six-inning, seven-strikeout effort in the 2015 wild-card win

“I mean he’s got great stuff, I’m really trying to get him over the plate and sticking to my approach,’’ Bird said.

His teammates have not asked for battling tips.

“Everyone has their own unique style as far as their swing,’’ Bird said, “so I feel like you kinda have to come up with your own game plan and execute it.’’

Didi Gregorius said he will look at facing Keuchel as a challenge.

“Always. We got to make adjustments and try to get to him now...I think we should have a better approach off him.’’

Keuchel has been the Yankees’ recurring nightmare. Asked about the stakes this time, Keuchel said, “They’re always extremely high. The wild-card game obviously was a win or go home. So that presented a different challenge...But there’s different circumstances. You had the lead, you’re supposed to win the series or you’re tied 2-2 when I take the ball it’s all on you. But just being here it brings a sense of calmness just because of the fact that we did win the 2015 wild card. But then again, that was two years ago. So this is a whole new team, a whole new challenge. And this is what we play for.’’

Keuchel dominated in ALCS Game 1 without throwing many changeups.

“It mainly was a feel,’’ he said, “Because I’m usually throwing 10 to 15, maybe 20 percent changeups, especially to this group being such good fastball hitters. But through the course of the game, pitch to pitch, at-bat to at-bat, it seemed like there was no need to change up what was working. And I’m a big stickler if I can go with plan A and they don’t make adjustments or I don’t need to make adjustments, then I’m not going to show plan B. And it was just the fact that I had some really late movement on my two-seam and my slider was really good, the cutter was decent. So I didn’t feel the need to change speeds with the change-up. And hopefully that comes into play [Wednesday] where they only saw one change-up. . . . But the change-up usually is the second- to third-best pitch. And for me to not use it hopefully will come into play for me.’’

Asked if he has to be more precise with his pitches since the Yankees just saw him, Keuchel said, “No, I mean, they showed me some quality takes in Game 1. And very similar to what the Red Sox did. I made no bones about it, the Red Sox are the most knowledgeable group of hitters that I’ve ever pitched against. That’s a compliment to their coaching staff, to their front office, to getting them ready, to the players to having a game plan. I think the Yankees had a very good game plan going into it. If you want to throw some fastballs in the outer corner, we’re going to take those borderline pitches and make the umpire put pressure on himself to call the ball a strike.

“And I got ahead of a few guys, but not as many guys as I would like to in their lineup. So props to them for doing that, because a ball or strike or one or two pitches here or there it’s a changed at-bats, it’s a change in the course of the game. And luckily I was able to get ahead and have a good feel for my off-speed and get strike one and put those guys in defense mode early enough and not into attack mode.’’