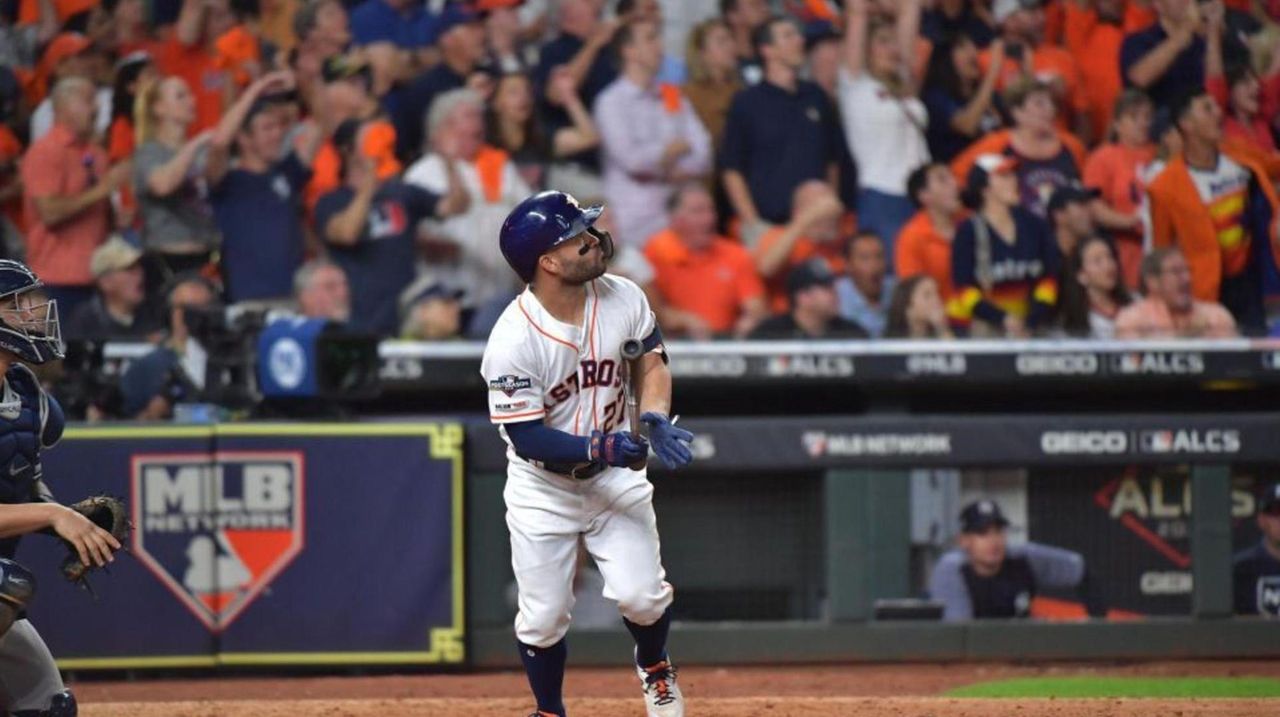 Jose Altuve’s two-out, two-run homer off Aroldis Chapman in the bottom of the ninth inning left the Yankees with a stunning 6-4 loss to the Astros in Game 6 of the American League Championship Series, Newsday's Yankees beat writer Erik Boland recaps all the action. Credit: Newsday / Willliam Perlman

HOUSTON — The stone quiet of the visitor’s clubhouse at Minute Maid Park minutes after as crushing a loss as a team can endure was broken only by the occasional sniffle emblematic of tears being shed.

After Jose Altuve’s two-out, two-run homer off Aroldis Chapman in the bottom of the ninth inning left the Yankees with a stunning 6-4 loss to the Astros in Game 6 of the American League Championship Series, Aaron Boone made the rounds in the room, grabbing each player and holding him close.

Each player received a message from the teary-eyed manager that only he could hear as Boone pressed his mouth close to the player’s ear.

Players exchanged hugs, with the biggest man in the room, Aaron Judge, providing some of the biggest embraces.

With CC Sabathia’s retirement becoming official and Brett Gardner a free agent who is not certain to return, there is no doubt whose clubhouse it now is, and Judge, his eyes wet, expressed a leader’s pride along with bottom-line disappointment.

Winning 103 games and the AL East title for the first time since 2012 despite placing a record 30 players on the injured list was something to be proud of, but a third straight flameout in October short of the ultimate goal was unacceptable.

“It’s a failure,” Judge said quietly but resolutely, very much echoing an owner, George Steinbrenner, he never played for but in some ways matches in spirit. “In spring training we talked about winning the division, putting ourselves in a good spot in the postseason and the World Series. And we came up short. So no matter how many games we won in the regular season or anything else we did, the season’s a failure.”

This is the first decade since the 1910s that the Yankees didn’t make the World Series. They last won it in 2009.

Moments after DJ LeMahieu tied the score at 4-4 with a dramatic two-run homer to rightfield off Roberto Osuna in the top of the ninth, Chapman retired the first two batters in the bottom of the inning, striking out Martin Maldonado and getting Josh Reddick to pop up. But he walked George Springer on five pitches, and the 5-6, 165-pound Altuve followed with a no-doubt home run on a hanging 2-and-1 slider.

The Yankees’ failure in this series was easy to diagnose.

Until LeMahieu’s  homer, which came at the end of an epic 10-pitch at-bat in which he fouled off four straight two-strike pitches, there had been far too few significant hits for the Yankees. They went 5-for-35 with runners in scoring position in the series, including 1-for-6 Saturday.

“Any time you lose, that’s probably going to be the case,” said LeMahieu, whose drive barely cleared the glove of a leaping George Springer and landed in the first row. “I thought we did everything we could do. Everyone was extremely focused. I think we all had the belief we were going to win the series one way or the other.”

Instead, the 107-win Astros, who beat the Yankees in seven games in the 2017 ALCS en route to their first World Series title, will open this year’s World Series at home Tuesday night against the Nationals.

Chapman had allowed only three homers in 57 innings in the regular season. He had given up only 27 in 535 2⁄3 regular-season innings in his career and one in 36 innings in the postseason. (That one was pretty memorable, too -- a tying two-out, two-run homer by the Indians' Rajai Davis in the eighth inning of Game 7 of the 2016 World Series before the Cubs won in the 10th. Chapman went on to pick up the win in that one, but there was no second chance for him Saturday night.)

Chad Green served up a three-run homer by Yuli Gurriel in the first inning, and the Yankees never caught up until LeMahieu tied it in the ninth.

Both teams went the bullpen route and both, by and large, were successful. The clubs used a combined 13 pitchers.

The Astros quickly got to Green. Altuve lined a 2-and-2 slider into the gap in left-center for a one-out double. Michael Brantley flied to center for the second out but Alex Bregman worked his seventh walk in six games. Green then grooved a 96-mph fastball that Gurriel jumped on and ripped into the Crawford Boxes atop leftfield, improving him to 2-for-21 in the series.

Rookie righthander Jose Urquidy came on in the fourth and struck out Gary Sanchez, but Gio Urshela got a 95-mph fastball on the first pitch he saw and drove it to right-center for a home run that cut the Yankees’ deficit to 3-2. The Astros tacked on a big run against Tommy Kahnle, working a third straight game for the first time since 2015, in the sixth that made it 4-2. The Yankees saw scoring threats end in the seventh and eighth innings when they hit into double plays.

“Just so many different emotions,” Boone said. “Proud of all our guys. The ultimate pain you can feel in sports, just knowing all that so many put into it. And just know how good of a club we have, to get back into it and then it to end that way, it’s hard and our guys are hurting. But I could not be more proud of them and the way they always compete. It will serve us well moving forward, when we get to the top of the mountain.”

But for a third straight postseason, that mountain will not be scaled.