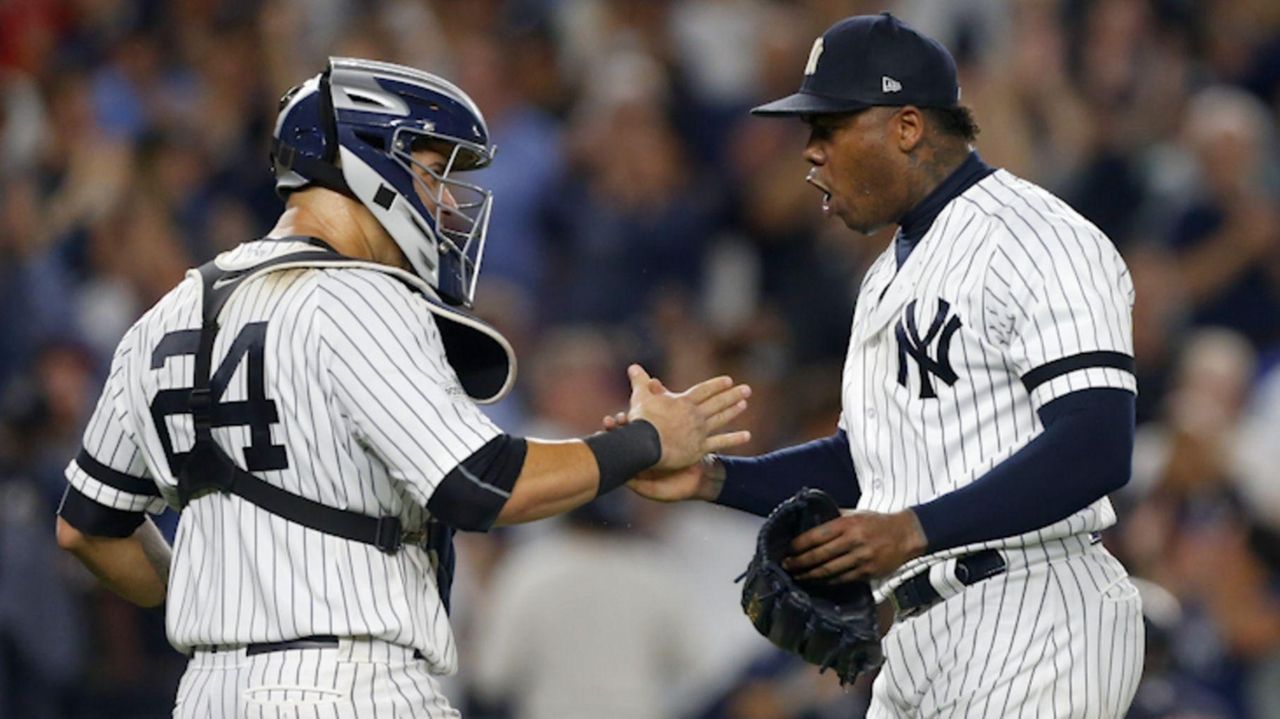 After a season-saving 1-0 win in ALDS Game 3 on Sunday night,  Yankees players are taking one game at a time and know they have a long road ahead of them against the Indians.  Credit: News 12

Luis Severino has a second chance to make a good postseason impression, and this time he won’t let his nerves get in the way.

At least that’s the plan Monday night as he starts Game 4 of the AL Division Series. The Indians will start Game 1 winner Trevor Bauer on three days’ rest.

A victory by the Yankees would even the series at 2 and force a deciding Game 5 Wednesday in Cleveland. According to The Weather Channel, there’s at least a 50-percent chance of rain in the Bronx from 5 p.m. to 10 p.m. First pitch is scheduled for 7:08.

Severino lasted only one-third of an inning against the Twins in the wild-card game. He gave up three runs, but the Yankees bailed him out him out as they knocked out starter Ervin Santana and won the game, 8-4.

“I learned that it doesn’t help, you know, a lot of adrenaline, trying to do too much,’’ Severino said Sunday. “So I’ll just try to calm myself down and try to breathe and think before every pitch.”

No Yankee was rooting harder than Severino for the ALDS to be extended, which the Yankees did Sunday by beating the Indians, 1-0, on Greg Bird’s home run.

“It means a lot,’’ Severino said. “I think the last start I have wasn’t my best one, so I’ll have a chance to go over there and try to do my job and give the team a chance to win.’’

Severino had earned the wild-card start based on his regular season record of 14-6 and 2.98 ERA. He generally was considered the third best starter in the American League behind Indians Cy Young candidate Corey Kluber and Chis Sale of the Red Sox.

Severino’s emotions apparently got the best of him in his first postseason appearance.

“It looked like it,’’ Yankees pitching coach Larry Rothschild said. “He didn’t execute pitches the way that he executed all year. He hasn’t done that two starts in a row. Let’s hope that remains that way.’’

Severino went right back to work right after his abbreviated start against the Twins.

“I start the next day, I look at the videos, see what happened and that was learn from my -- that start, trying to -- not to be too perfect, just locating my pitches and trying to be more careful with the hitters,” Severino said.

Indians manager Terry Francona had intended to start Josh Tomlin but checked with Bauer, who told him he’d be ready.

“Once he was good to go, I think he’ll be fine,’’ Francona said.

“It’s always more nerve wracking being in the dugout watching than it is being out there playing,’’ he said. “So, looking forward to my opportunity for sure. I consider this normal rest for me. I enjoy pitching on short, I guess, technical definition of short. But if I could draw it out, personally, this is how I’d pitch every time. Take my normal two days’ recovery after my start and then do my day before routine and then roll it out there tomorrow. So I’m feeling very confident where I’m at.’’

Rieber: Positive test for Yankees coach a dose of reality
Montgomery at top of his game as Yanks top Rays
DeGrom on back issue that sent him to IL: 'This is minor'
No LeBron for Lakers, but surging Knicks don't care
Lennon: Mets right in taking precautions with Jacob deGrom
Nets seek final tuneup for James Harden
Didn’t find what you were looking for?