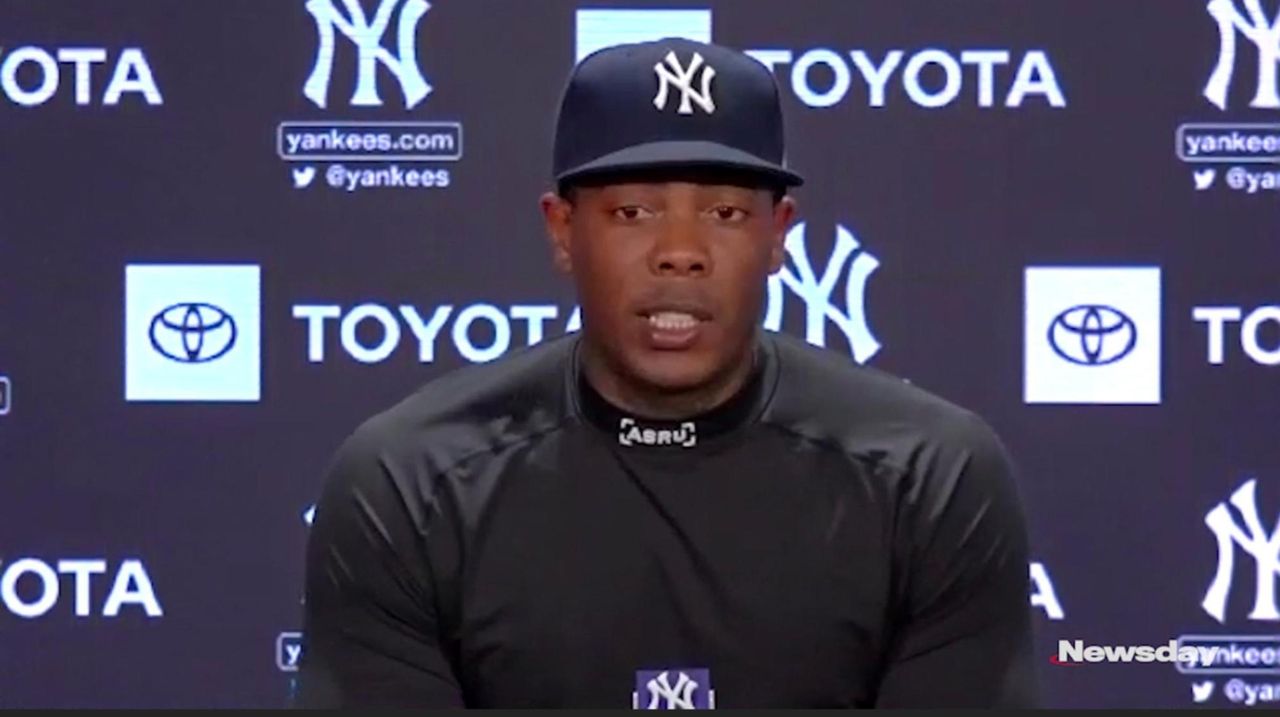 Major League Baseball threw a high, hard one at Aroldis Chapman on Wednesday, suspending the Yankees’ closer for three games for “intentionally throwing a pitch at the head area” of Tampa Bay’s Mike Brosseau on Tuesday night.

Unless they meet in the postseason – a possibility, by the way – the AL East foes had to put their simmering rivalry on hold until 2021 after Wednesday night.

Chapman, who denied his 101-mile per hour fastball was intended for Brosseau’s head area, appealed his suspension, so he was available for Wednesday’s game.

In a statement announcing the ruling, MLB explained the length of Chapman’s penalty (three games of a 60-game season) by saying: “Chapman has previously been disciplined in his career for intentional throwing at the head area.”

Boone and Cash do not have appeal rights, so they were replaced by bench coaches Carlos Mendoza (Yankees) and Matt Quatraro (Rays) in the dugout on Wednesday. Chapman, Boone and Cash were also fined an undisclosed amount.

To the surprise of no one, Boone and Chapman said they disagreed with the suspensions. Cash said he thought his own suspension was “fair,” but said he didn’t have an opinion on Chapman’s ban.

Cash sure did have an opinion – plenty of them – in the aftermath of the incident in the ninth inning of Tuesday’s 5-3 Yankees victory. The last thing Cash said was, “And the last thing I'll say on it is, I got a whole [expletive] stable full of guys that throw 98 miles an hour. Period.”

Boone called those comments “scary” on Tuesday. On Wednesday, he didn’t back down, calling Cash’s comments “reckless and inflammatory.”

Boone also said, “I don’t think I should be sitting out tonight, or Chappy, but I also do respect the process and the thoroughness and the care that they gave . . . I accept it, but I certainly don’t agree with it.”

Chapman, who earned his first save of the season in just his fourth appearance on Tuesday, said through a translator that he was not trying to hit Brosseau and didn’t think he deserved three games.

“I think it was a little harsh,” Chapman said. “That’s the reason why I’m going to appeal the decision . . . Just to be clear, I had no intention of hitting anybody at all.”

Chapman, who didn’t make his season debut until Aug. 17 after a positive COVID-19 test, said he has never hit a batter on purpose. Of course, his sizzling fastball didn’t hit Brosseau . . . but if it had, we could be talking about a significant injury today, which is why the Rays were so upset on Tuesday.

“I understand,” Chapman said. “You take a look at the pitch and the velocity on the pitch and how close the pitch was, yeah, it looks bad. It’s obvious. But I can tell you right now I had no intention of hitting anybody . . .[lack of] fastball command is something I’ve been dealing with all year.”

Brosseau said Chapman’s suspension was “fair,” and both the Yankees and Rays said they didn’t expect their intense rivalry to continue to spin out of control on Wednesday as it did on Tuesday.

Boone did take a tongue-in-check shot at Cash for what the Rays manager termed the Yankees’ “poor coaching, poor judgment, poor teaching” in his postgame tirade on Tuesday.

“I’m going to take offense to someone popping off in the heat of the moment? No chance,” Boone said. “And tonight will give me a chance to reflect on that a little bit and maybe tighten up on my coaching techniques.”

Lennon: This new rivalry just waiting for next flare-upAs the Rays' Kevin Kiermaier put it in the wake of Tuesday night's fracas, "We don't like them, they don't like us."