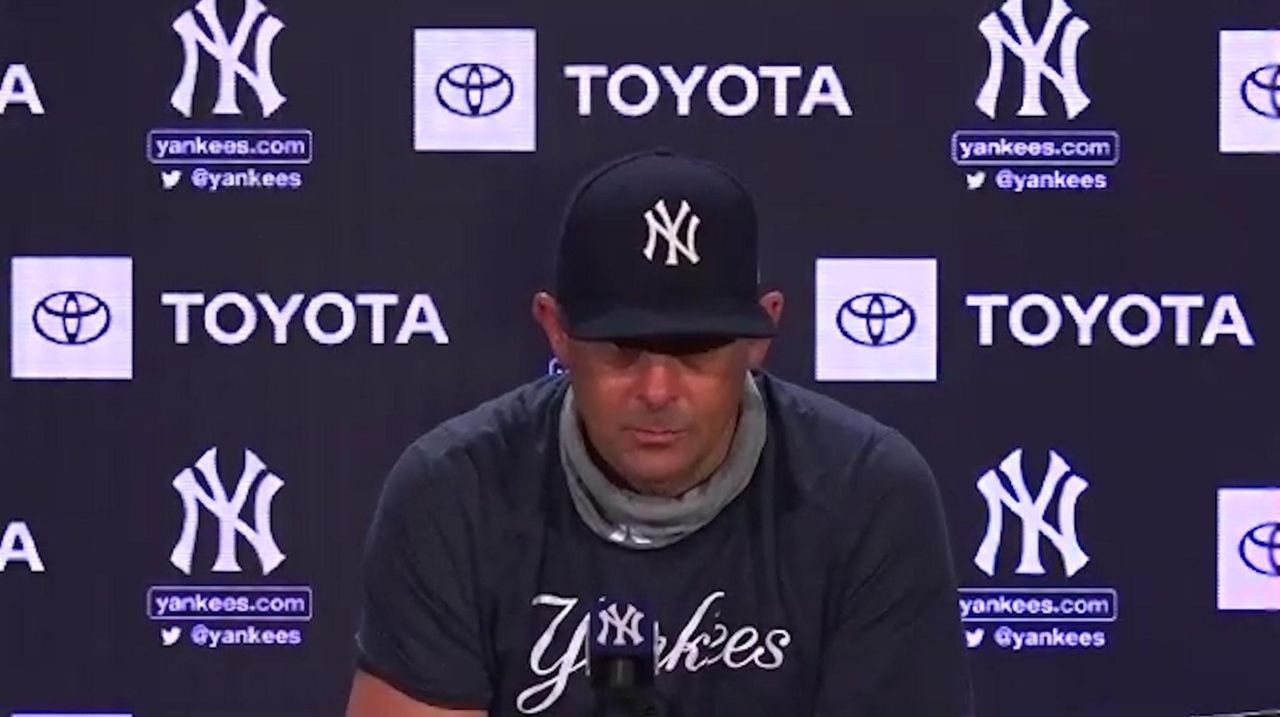 Add Aroldis Chapman to the list of Yankees who have tested positive for COVID-19.

The closer had passed intake testing well over a week ago that allowed him to begin Spring Training II at the Stadium. "Obviously, this virus does not discriminate,” said manager Aaron Boone, who made the announcement Saturday before his club’s workout and intrasquad game.

“He's got mild symptoms but overall is doing well,” Boone said. “And so he will not be here for the foreseeable future. Beyond that, I'm not going to get into commenting much on him.”

Including exactly when Chapman, who was at the Stadium doing workouts at least as recently as Tuesday, tested positive, becoming the third frontline Yankee to do so.

Starting second baseman DJ LeMahieu  and righthander Luis Cessa, a hard-throwing bullpen piece who can pitch in long relief or spot-start, tested positive for the virus before intake testing and have not yet joined the Yankees for camp. They are unlikely to be ready in time for the Yankees’ season opener on July 23 against the defending champion Nationals in Washington, and now Chapman can be added to that list.

Each of the three players  gave the Yankees permission to disclose those results, per HIPAA laws.

According to the 2020 operations manual, Chapman won’t be able to rejoin the Yankees until he tests negative on consecutive tests, is fever-free for at least 72 hours (without the use of anti-fever medication) and is evaluated and cleared by a doctor.

The news was one more reminder — not that it was needed — of the obstacles facing Major League Baseball as it tries to get through this season in the midst of a pandemic.

“It's definitely tough, especially when it comes to a teammate of yours that just tested positive,” centerfielder Aaron Hicks said. “But it just proves how safe we have to be within our little bubble that we're in right now and continue to make sure that everybody's doing what they need to do to stay negative. Hopefully he recovers from it fast and gets back to the team.”

Boone said, without going into detail, that no player or staff member was required to go through any additional testing as a result of Chapman’s positive test and that he isn’t concerned that the closer infected anyone else.

“I feel like we're following all protocols. We have not had any other positive tests [besides Chapman’s],” Boone said. “We’ve adhered to all the contact tracing things. So we feel like we've handled it and are handling it. And again, this is something that, even moving forward, a positive test is probably going to come our way and it's about doing all the things that hopefully as a whole keep us safe and healthy. But right now, we feel like we're doing a good job in here of managing [it].”

Hicks, however, acknowledged the obvious: that yes, once he found out about Chapman, he ran through a mental checklist of just how much contact he had had with the closer while he was in camp.

“Of course, you're going to automatically run it back through your head: ‘Was I ever near this guy?’ or this or that,” Hicks said. “Yeah, you definitely do that for sure.”

Boone said Chapman’s positive result should have an impact on the team about the importance of constantly taking the right steps at the ballpark and away from it.

“It's obviously just another reminder that we have to be vigilant as far as wearing our masks when possible, the [social distancing], the decisions we're making away from the field, to as best we can stay out of harm's way,” Boone said. “Those are all just constant reminders and, by the way, not that anyone that has been in here hasn't done that, including Chappy. But it's just important [to remember] that it can strike at any time.”

Hicks indicated that the clubhouse reaction to the news was almost of the ho-hum variety.

“It’s kind of hard to say that we expected to go throughout the whole season without anybody testing positive. I think that would be remarkable,” Hicks said. “It's just a part of what’s going on right now. You could get COVID at any time, just kind of going throughout your daily routine. It’s something that’s just kind of unpredictable, and you can’t see it. Just makes it tough, but I feel like everybody was pretty understanding that it’s not anybody’s fault. It just kind of happens. We’re doing everything we can to be safe and it still happened.”