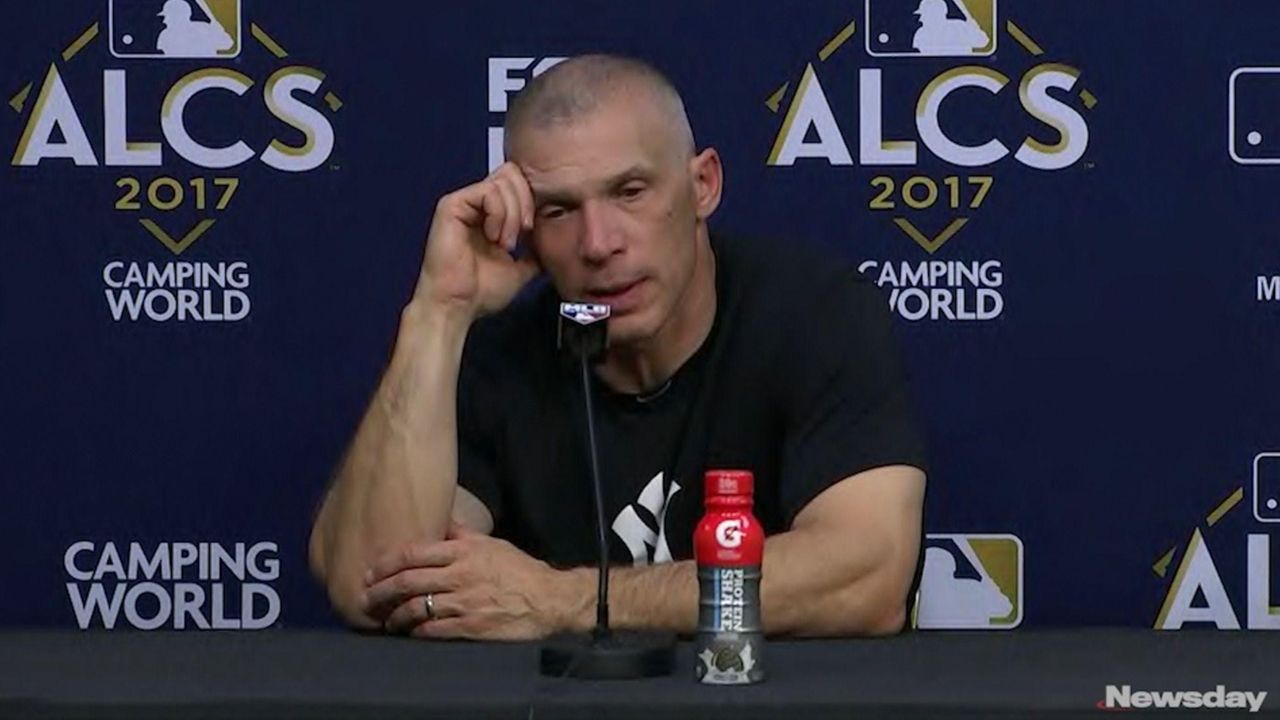 The Houston Astros defeated the New York Yankees, 4-0, in Game 7 of the ALCS at Minute Maid Park on Saturday, Oct. 21, 2017.  Credit: MLB Productions

HOUSTON — Eventually there will be time for the Yankees to reflect on a season that turned out far better than anticipated.

They’ll reflect on how they soared past the modest expectations set for them in spring training, doing so with contributions from a young core of talent that — in terms of long-term success — has the franchise looking the best it has in a generation.

But that will come later.

The immediate aftertaste is a bitter one for 2017, which ended with a thud Saturday night in a 4-0 loss to the Astros in Game 7 of the American League Championship Series in front of 43,201 roaring fans at Minute Maid Park.

“We had a great season,” general manager Brian Cashman said outside a quiet Yankees clubhouse. “It’s been a wild and fun ride, but tonight it hurts because the ride’s over. Obviously, we’ll all get back to New York and deal with whatever’s next.”

Among the immediate “nexts” are the contracts of Cashman and Joe Girardi, which expire at month’s end. Ownership is believed to want both back, and a deal with Cashman is likely to get done quickly. In Girardi’s case, there has been some thought that after 10 years as manager, he might want to step away, though all he said after the game is that he’ll be sitting down with his family to discuss it.

As Cashman said, those issues can wait. Saturday night was about the Yankees being outscored 15-3 and managing only 20 hits while losing four games inside this ballpark.

Astros righthander Justin Verlander, who allowed one run in 16 innings in winning Games 2 and 6, was named series MVP. The Astros, who advanced to the World Series for the second time and the first as a representative of the American League, will play the Dodgers starting Tuesday night in Los Angeles.

The Yankees, who came back from a 0-2 deficit to beat the Indians in the best-of-five Division Series and dropped the first two games in Houston in the ALCS before winning three at the Stadium, went quietly Saturday night, accumulating three hits.

“Every guy will be thinking about it from this night on until Opening Day next year,” said Aaron Judge, who hit a rookie- record 52 homers this season and added four more in the postseason. “We’re just going to keep fighting and just try to get better every day in the offseason. That’s going to be the key now.”

The Yankees simply could not solve Astros pitching in the four games at Minute Maid Park, hitting .159 with eight walks and 48 strikeouts. They outscored Houston 19-5 in the three games in the Bronx.

“You’ve got to give them credit,” Girardi said. “They pitched their rear ends off. And the bottom line is they beat us.”

The Yankees tattooed Astros righthander Charlie Morton to the tune of seven runs in 3 2⁄3 innings in Game 3, but he held them to two hits in five innings in Game 7. Lance McCullers Jr., whose father pitched for the Yankees, allowed one hit in the final four innings for the save. The two totaled two walks and 11 strikeouts.

The key sequence in the game might well have been the fifth when, with Houston leading 1-0, Greg Bird was thrown out at the plate for the second time in the series. The Yankees didn’t threaten again.

“I think there are things that we can do better,” Girardi said of where he sees room to grow. “I think guys will mature and at times I think there is mental growth as well as physical growth.”

Yankees lefthander CC Sabathia, a stalwart this postseason and the stopper of stoppers after losses this season — 10-0 with a 1.69 ERA in 13 starts overall entering Game 7 — didn’t have his best stuff in what could have been his final start as a Yankee but still left after 3 1⁄3 innings trailing only 1-0 on Evan Gattis’ fourth-inning homer.

Sabathia got some defensive help in the second. When Yuli Gurriel sliced a 2-and-0 fastball to right, Judge raced back, perfectly timed his jump and snagged the ball as he crashed into the wall, robbing Gurriel of a home run that would have given the Astros the lead.

Tommy Kahnle, who allowed two hits and struck out nine in six previous scoreless outings in this postseason, allowed three runs in a killer fifth on a home run by Jose Altuve and a two-out, two-run double by former Yankee Brian McCann.

“We have a lot of young guys on this team,’’ Judge said. “Getting as far as we did is going to be beneficial down the road for us. Just getting a taste of it and getting our feet wet was probably the biggest thing.”

Said Girardi, “The mental growth sometimes can be not trying too hard, being able to control your emotions in situations, and I think a lot of times it can be tough. You get to this point, you can’t imagine how bad the guys want it. And you have to learn to sometimes control your emotions. So that’s growth. I think there are things that individual players can do better. And that will continue. And if I’m a part of it, it will be a focus.”