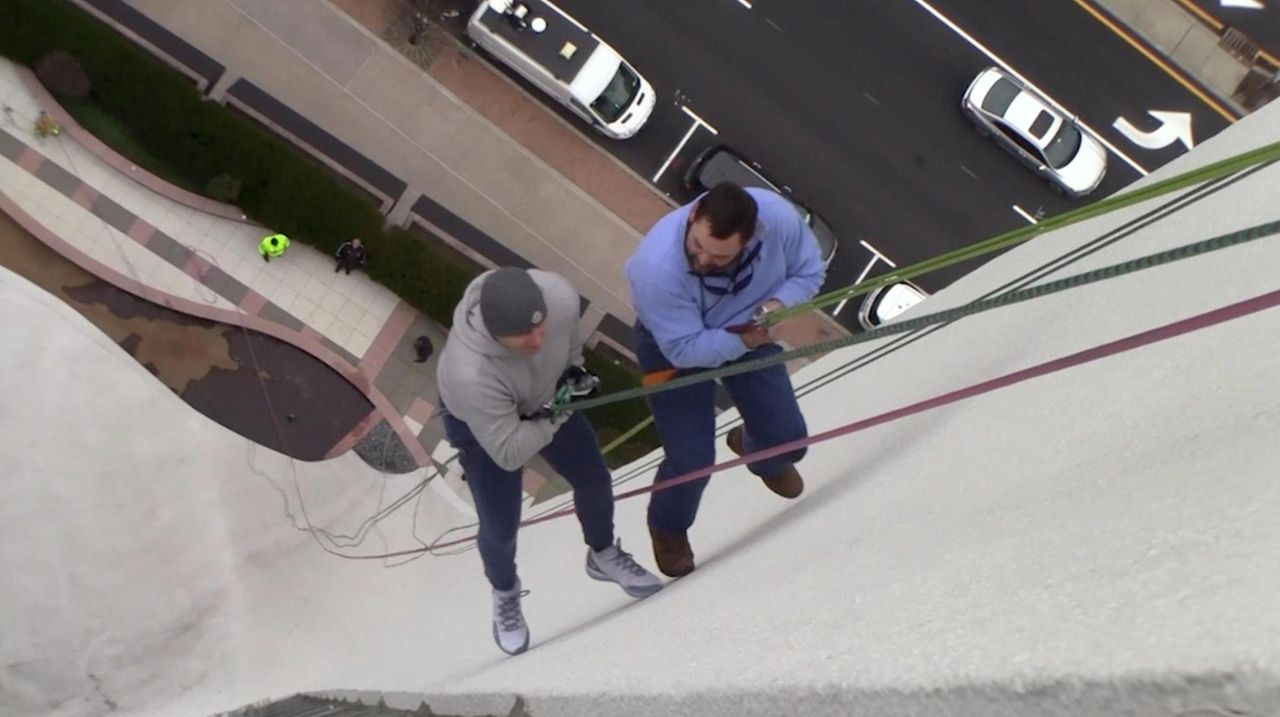 On Friday, Yankees general manager Brian Cashman practiced for the Rappelling Santa and Holiday Tree Lighting show in Stamford, Connecticut.  This is the ninth year Cashman has been a part of this show, in which he rappels down one of the tallest buildings in Stamford. Credit: Patrick E. McCarthy

STAMFORD, Conn. – All signs are pointing to free-agent pitcher Patrick Corbin wanting to join the Yankees, from his statement in April that “it would definitely be great to play there” to his recent wedding, in which his brother put on a Yankees cap at the end of his best man toast and implored the Syracuse native to move closer to home.

Yankees general manager Brian Cashman has been through the free-agency game long enough to know that money usually talks over sentiment, though. After meeting with Corbin and his new bride at Yankee Stadium on Thursday, Cashman on Friday said the team is not waiting on the former Arizona Diamondbacks lefthander to decide where he wants to pitch next.

Cashman has a lot of irons in the fire, and Corbin is just one of them. If the Yankees really are Corbin’s first choice, he’ll have to strike a deal with them before Cashman pulls the trigger on a different free agent, such as J.A. Happ, or makes another trade after picking up lefthander James Paxton on Nov. 19.

“I never said we are waiting [on Corbin],” Cashman said before a practice run rappelling down a Stamford building in his annual stint as a daredevil holiday elf (the actual event is Sunday).

“We’re fully active in the marketplace, both trades and free agency, just as they are fully active in the free-agent market,” Cashman said. “It’s a fluid situation at all times . . . There’s a lot of players of interest to us and a lot of players that can improve us some, both in free agency and trades, so I wouldn’t designate anybody as a primary.”

Cashman wouldn’t even go so far as to label the Corbin meeting as a recruitment effort. Corbin met with the Phillies, Nationals and Yankees in a three-day Acela corridor tour, and it’s not known how many other teams are interested in the 29-year-old.

“It’s not a recruiting routine for us. It’s more of an educational process,” Cashman said. “We gave a tour of our facilities. We had dinner [Thursday] night and answered all questions and shared all information. So at least they’re in a better position about the New York Yankees. So obviously we continue to stay engaged in the free-agent market as well as the trade market trying to address our needs.”

Of Corbin’s family, Cashman said: “My understanding is they’re all Yankee fans. Just because they might have a rooting interest in bringing him closer to home and having family closer to home, I don’t think it’s going to make any – I think their Yankee allegiances are appreciated, but usually in this process, typically the thing that’s most important is the financial opportunities that exist in various locales.”

Cashman also said he is getting “a lot of interest” in Sonny Gray, whom he has vowed to trade away before next season. And then he climbed down a building (and back up).

Hold them tender. As expected, the Yankees tendered contracts to all of their arbitration-eligible players before Friday’s deadline.