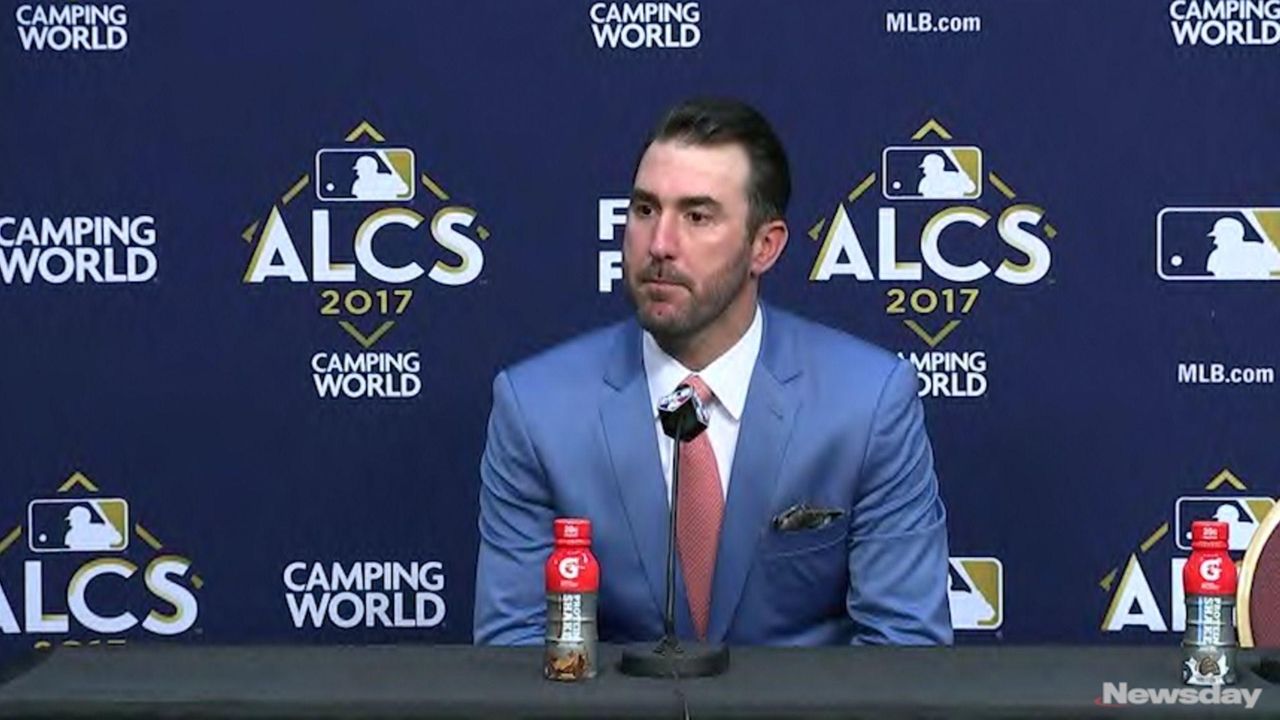 In another pitcher's duel, the Yankees fell to the Astros, 2-1, in Game 2 of the ALCS on Saturday, Oct. 14, 2017 at Minute Maid Park in Houston. Credit: Handout

HOUSTON — The good news, if you’re predisposed to take the optimistic approach?

The Yankees have been here previously — eight days earlier, to be exact.

They lost another pitchers’ duel in the American League Championship Series on Saturday, dropping a second straight 2-1 decision to the Astros at Minute Maid Park.

The loss put the Yankees, shut down over nine innings by Justin Verlander before losing on a walk-off double by Carlos Correa with one out in the ninth, down two games to none in the best-of-seven series, the same 0-2 deficit they faced in the best-of-five ALDS against the Indians.

“It’s a tough loss,” Joe Girardi said. “But it’s not like we haven’t been here before. My message to our team is, hey, let’s go home, win one at home, and let’s see what happens.”

“Obviously, that was a really good team that we had to win three straight against,” Chase Headley said of the ALDS. “This is a really good team, too. But we know that we’re capable of beating them, so we just have to find a way to score one or two more runs, get the next game, and we’re right back in it.”

Game 3 is scheduled for Monday night at the Stadium with CC Sabathia facing the Astros’ Charlie Morton.

“Our pitching’s great and they’ve really stepped up,” Brett Gardner said. “Offensively, I’d like to think we can only get better.”

They can’t get much worse. Through two games, the Yankees have hit .159 and struck out 27 times in 63 at-bats (the Astros are hitting .190 but have struck out only nine times in 58 at-bats).

After Dallas Keuchel struck out 10 in seven shutout innings in Game 1, Verlander fanned 13 in Game 2. The righthander, acquired just before the Aug. 31 deadline, allowed one run, five hits and a walk and threw a season-high 124 pitches.

Jose Altuve singled off Aroldis Chapman with one out in the ninth, his fifth hit in eight at-bats in this series. Correa, who homered earlier in the game, then lined a drive into the gap in right-center. Aaron Judge backhanded it at the front of the warning track and fired the ball directly to second base, and Didi Gregorius had to throw the ball over Correa, who made a pop-up slide.

The Yankees appeared to have a play at the plate, but Gary Sanchez couldn’t grab Gregorius’ throw, which was in the dirt. The ball trickled away as Altuve slid across the plate and the Astros began their celebration.

“I short-hopped it, so I’m not going to blame him,” Gregorius said.

Sanchez, through his translator, said he should have come up with it. “It was a small bounce, but that’s a play I know I can make,” he said.

The Yankees did seem to dodge a bullet with the pitcher who was their ace during the regular season. Luis Severino, who pitched only one-third of an inning in the wild-card game but shook it off to pitch well in ALDS Game 4, left after the fourth inning Saturday because Girardi saw him doing a windmill with his right shoulder during Marwin Gonzalez’s at-bat in the inning. Girardi called it a “red flag” but later said it was more precautionary than anything else.

Severino, who was upset about being taken out, will not undergo any further tests, according to the Yankees. “I felt like I could keep pitching,” he said. “The doctor here saw me and they saw nothing.”

With two outs in the third, Gardner lined a full-count pitch into the rightfield corner but was thrown out when he tried to stretch the hit into a triple. Gardner was called safe, but the Astros challenged and it was overturned. Josh Reddick and Correa made perfect throws on the play, just as Astros leftfielder Marwin Gonzalez had made a perfect throw home in Game 1 to nail Greg Bird at the plate.

The Astros made it 1-0 with one out in the fourth when Correa sliced a 1-and-2 fastball the other way, with the ball just eluding the 6-7 Judge as it skimmed over the wall for a home run. Contending that the young fan who caught the ball had interfered, Girardi asked for a crew chief review, which was granted, but the call was upheld.

Two-out doubles by Aaron Hicks and Todd Frazier tied the score at 1-1 in the fifth.

“That’s the thing about baseball: We’ve got another one,” said Judge, who has combined with Sanchez to go 6-for-57 with 34 strikeouts in the ALDS and ALCS. “We’ve been facing some tough pitchers, some tough games. But this is a team that battles. We’re not going to give up. We’re going to keep fighting.”