Clint Frazier of the Yankees celebrates his second-inning home run against the Braves with third base coach Phil Nevin at Yankee Stadium on Wednesday. Credit: Jim McIsaac

In one breath Clint Frazier said he’s more than “ready” to perform his “role” to the best of his ability.

In another breath, the 25-year-old prospect wondered exactly what that role might be.

“I think I’m still trying to figure it out,” Frazier said with a smile Wednesday afternoon.

If the outfielder can keep up what he started a few hours later, the Yankees will happily figure it out for him. 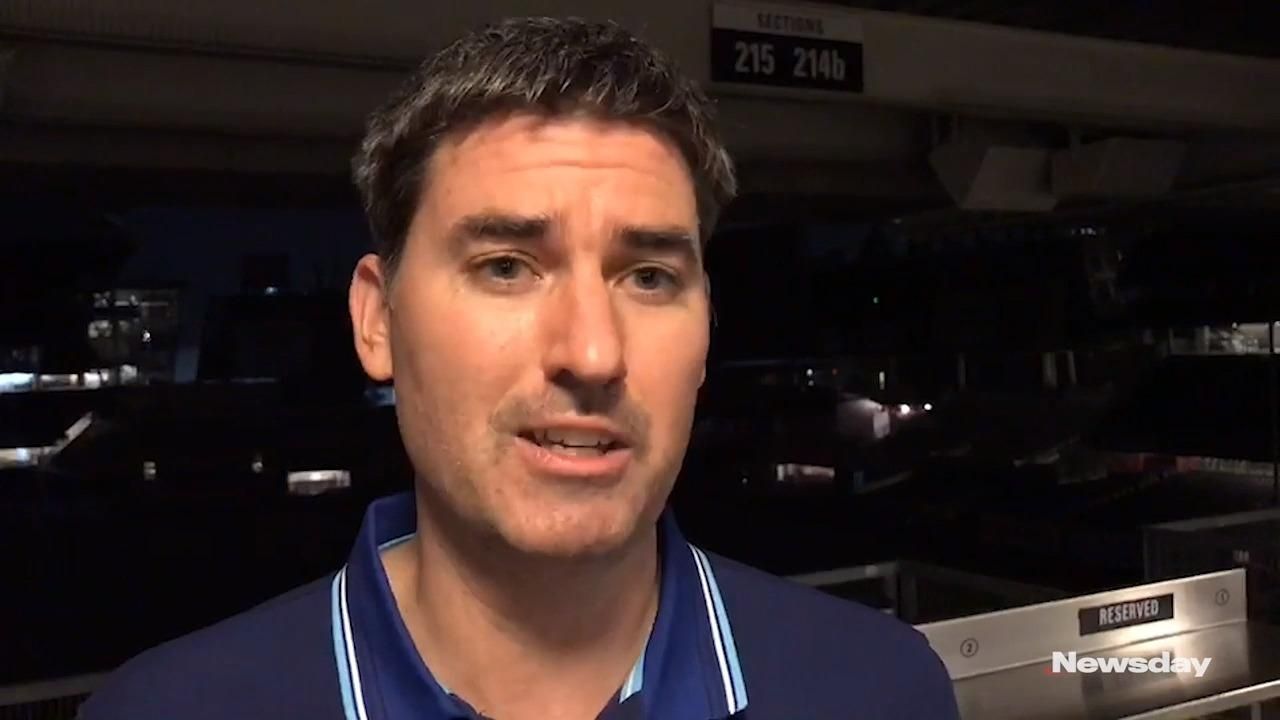 Boland: Yankees' Frazier wanted to make a splash and he did Newsday's Yankees beat writer Erik Boland recaps the big night for Clint Frazier and DJ LeMahieu as the Yankees beat the Braves, 6-3, at the Stadium on Aug. 12, 2020. Credit: Newsday / Erik Boland

Frazier, a fan-favorite since the Yankees made him the centerpiece of the Andrew Miller deal with the Indians at the 2016 trade deadline, had three hits, including a homer, in a 6-3 victory Wednesday night that completed a two-game sweep of the Braves at the Stadium.

Frazier, who made the club out of Spring Training II but was optioned to the club’s alternate site in Moosic, Pa., two days into the regular season, was recalled Wednesday morning as the Yankees find themselves short an outfielder with Giancarlo Stanton on the injured list with a left hamstring strain.

“I wanted to come here and try to make a splash,” Frazier said.

Starting in right for Aaron Judge, Frazier did exactly that, homering in his first at-bat of 2020, a bomb to left-center in the second inning off righty Huascar Ynoa that tied the score at 2 (the slumping Gary Sanchez, batting before Frazier, put the Yankees on the board with a homer to left).

Frazier, who finished a triple shy of the cycle, singled in the Yankees’ two-run fourth that gave them a 4-2 lead. He doubled and scored in the fifth — coming in on the third of DJ LeMahieu’s four hits — to make it 5-2. LeMahieu scored on Luke Voit’s single to make it 6-2.

Masahiro Tanaka was not sharp in his third start, allowing two runs, five hits and two walks over four innings. Tanaka allowed a two-run homer to Johan Camargo in the second that gave the Braves (11-9) a 2-0 lead. Jonathan Loaisiga pitched two scoreless before giving way to Chad Green with two on and none out in the seventh. Green was again dominant in retiring three straight. Jonathan Holder allowed a run in the ninth, so Aaron Boone brought on Zack Britton, who allowed the tying run to get to the plate but still recorded his seventh save in seven chances.

The night, however, was mostly about Frazier, who is too old to be considered a top up-and-coming prospect and who instead is looking for some more certainty when it comes to his big-league career.

“I think I'm still trying to find my role because I'm human and I look at a couple of weeks from now and whenever Stanton does come back and where that puts me,” said Frazier, who debuted in 2017.

“And I think that I at least have time between now and then to possibly establish a role, and I would hope that I make the most of it. That’s really all I’m asking for now is just a chance to go out there and try and do what I love to do and make the most of it whenever I get that chance.”

Aaron Boone and GM Brian Cashman huddled with Frazier for a heart-to-heart meeting shortly after the July decision to option him.

“There was a lot of questions asked,” said Frazier, declining to specify. “But it was obviously [questions like], what is expected of me whenever I go down there, what do I need to do to get back? And, ultimately, where is my place on this team? Because it's a really good team and I feel like I'm ready. I think there's a lot of people that feel that way, too. But there's a lot of guys in front of me and it's been frustrating. That's the one way to sum it up is I feel like I'm ready and I'm hoping that I can make the most of an opportunity if it comes. It's hard to make the most of something if you're not given that chance and I would like that chance.”

Boland: Yankees' Frazier wanted to make a splash and he didNewsday's Yankees beat writer Erik Boland recaps the big night for Clint Frazier and DJ LeMahieu as the Yankees beat the Braves, 6-3, at the Stadium