Yankees reliever Darren O'Day throwing in the top of the sixth inning against the Pirates at George M. Steinbrenner Field in Tampa, Fla., on Saturday. Credit: Newsday/J. Conrad Williams Jr.

Aaron Boone said he recalled something similar happening early in his big-league career when he faced a lefthander named CC Sabathia.

Backup catcher Kyle Higashioka, meanwhile, seemed to have predicted the entire sequence much earlier in the day.

O’Day, whose deceptive sidearm delivery can make even the best of hitters look silly, did just that in the sixth inning Saturday. Lefthanded-hitting Tony Wolters took a big cut at a 2-and-2 slider that came floating in at 80 mph, missed it badly and went down in a heap when the ball continued darting inside and connected with his groin area.

Had O'Day ever struck out anyone like that before? "I have, yes," he said almost sheepishly. "You know what, it’s a hard game, it really is, so I’m not going to sit there and gloat about it or anything."

"I think CC got me that way one time," Boone said, laughing. "Look, when you’re a good pitcher and you have a unique angle like that, sometimes you get some funny swings.''

O’Day allowed a home run Saturday but has been terrific in spring training, allowing that run with no walks and four strikeouts in two innings. He routinely has confused Yankees hitters in simulated games, too.

Speaking Saturday morning, Higashioka said of catching O’Day: "It's fun because you always think of the guys throwing 100 as the big-time swing-and-miss, make-everyone-look-stupid type of pitchers. He clearly doesn't throw 100 [mph], but he has that same type of bewilderment to the hitters where it's just . . . they can still look overmatched."

O’Day threw to Gary Sanchez and praised his work ethic.

"Gary’s working. He wants to be the best," O’Day said. "He asked to catch me today, which is great, and I appreciate that. I wanted to throw to him again because we’re going to be working together a lot this season."

Longtime bullpen coach Mike Harkey said he agreed with Boone’s comment from earlier in camp that this is the "deepest" Yankees pitching staff he’s seen in his four years as manager.

"In my 12 years here, probably since 2009, ’10, ’11, this is probably the most depth that we’ve had from starter to closer in a long time," Harkey said. "It’s really weird now, [when] you’re talking about us losing [Zack Britton], but I still think depth-wise we’re still pretty well situated."

Boone wasn’t the only one to come away impressed with Luis Severino’s bullpen session Tuesday, the righthander’s first time back on a mound during his rehab from the Tommy John surgery he underwent in late February 2020.

"I've seen a lot of first-time bullpens after Tommy John, and watching Sevy’s has probably been the most comfortable I've ever seen a player throw in his bullpen and probably the most aggressive I've seen a player," Harkey said. "It looked like he had zero apprehension, zero worry about whether his surgically repaired elbow was sound, and that for me was probably the biggest thing.

"I mean, he's still probably looking at 20, 30 more bullpens and a lot more live batting practices and then games, so he's still a long way away. But very encouraging."

The expectation is for Severino, who threw another bullpen session Friday and came through it fine, to return at some point in the season’s second half. 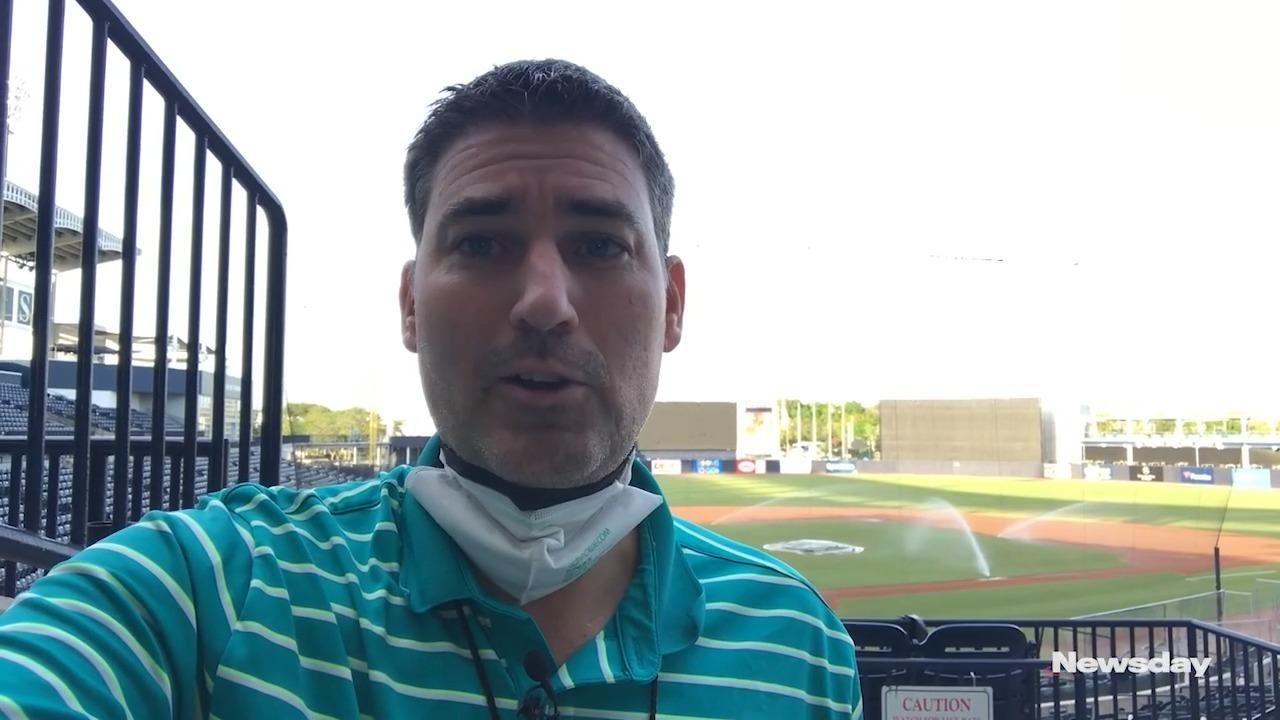 LeMahieu continues to hit at Yankees spring training DJ LeMahieu, last year's MLB’s batting champion, went 2-for-3 with a three-run homer in the Yankees' win over the Pirates on Saturday to improve to 8-for-20 with a .979 OPS in eight games. Newsday's Erik Boland reports.

DJ LeMahieu’s spring training has looked like a facsimile of his 2020 regular season.

LeMahieu, who won the MLB batting crown last year with a .364 average, went 2-for-3, including a three-run homer, on Saturday afternoon in the Yankees’ 7-5 victory over the Pirates at Steinbrenner Field. It made LeMahieu 8-for-20 (.400) with a .979 OPS in eight games.

Lefthander Justin Wilson, who had a miserable debut Wednesday when he allowed five runs (four earned) and retired only one batter, allowed two hits but no runs and struck out a batter in one inning Saturday.

"I still have some steps I’ve got to make, but closer today," Wilson said. "I wouldn’t say I’m in midseason form yet . . . but better than the other day for sure."