Nothing excites a fan base like a young, electric arm.

And, at the moment, Yankees fans are head over heels for the one belonging to Deivi Garcia. They count down the days until his next start, which in this case is Tuesday night at the Stadium to begin a huge three-game series against Toronto.

The excitement is not without cause.

Garcia, 21, rated among the top prospects in the Yankees' organization for the last several years, has been mostly terrific since making his big-league debut on Aug. 30. He is 1-1 with a 3.06 ERA and 0.91 WHIP in three starts, striking out 18 and walking two in 17 2/3 innings. 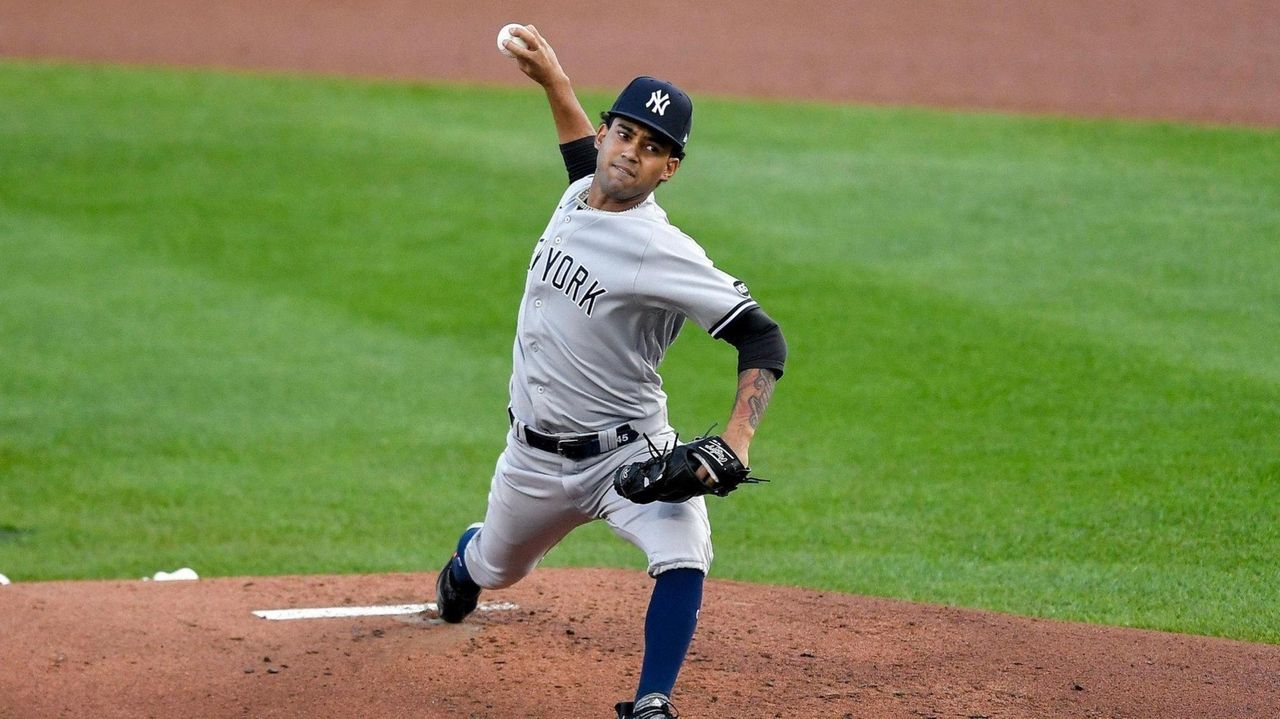 In his debut against the Mets, Garcia did not allow an earned run over six innings in which he struck out six and walked none. A ho-hum outing Sept. 4 at Baltimore followed — he left the game with two outs in the fifth holding a 3-2 lead but was charged with four runs after fellow rookie Clarke Schmidt allowed two of his runners to score — but what Garcia did in his third start almost completely wiped away any lingering doubts.

It was last Wednesday in Buffalo against a scorching-hot Blue Jays team that had overtaken the Yankees for second place in the AL East. The Yankees entered that game a mess, having lost five straight and 15 of their last 20 to fall into the eighth and final playoff spot in the American League, barely ahead of the Orioles. They also were three games behind Toronto and were coming off two losses to the Blue Jays, a 12-7 defeat in which they allowed 10 runs in the sixth inning and a 2-1 setback in which they wasted a solid outing by J.A. Happ.

With the team desperate for positive developments of any kind, Garcia delivered, allowing two runs and five hits in seven innings with six strikeouts and no walks. He retired 15 of the last 16 batters he faced.

And what Garcia offered afterward, when asked how much pressure he felt taking the ball in what amounted to a must-win game, had to be music to the ears of both the fan base and the Yankees.

"No. No pressure," he said through his interpreter. "The reason behind it is I enjoy the competition. Tough game, tough opponent, that’s what I enjoy . . . I don't see it as pressure, I see it more as my responsibility to go out there and give us a chance."

The Yankees have not lost since. Garcia's start against the Blue Jays began a five-game winning streak, and they enter this week's series a half-game behind Toronto and four games behind first-place Tampa Bay.

That outing gave his manager the confidence to throw him in any situation the rest of the way. Any situation, whether it’s kicking off an important series such as this one or even, perhaps, a playoff game.

"I know he wouldn’t flinch at the opportunity," Aaron Boone said late last week of that possibility. "I’m totally confident — forget the pitching part of it — he can handle any situation you throw him in."

Garcia's lean but muscular 5-9, 163-pound frame has drawn comparisons to his idol, Dominican Republic countryman Pedro Martinez, a comparison the former does not run away from.

"To be compared to Pedro is something I take a lot of pride in," Garcia said during spring training. "And no, I don't feel intimidated by the comparison. I feel like it’s a great responsibility that I have to assume. It feels good to be compared to Pedro and I hope that someday I can be like him, because he is one of the best pitchers of all time."

Martinez tweeted about Garcia hours after his Aug. 30 debut and the rookie disclosed Sunday that there was more than that — a phone call.

"We talked after [my debut]," Garcia said. "That was great."

But not as fulfilling as he would have liked. Garcia, whose work ethic has always been praised inside the organization, already seems to be planning for the next conversation with Martinez.

More music, no doubt, to the ears of the Yankees.

Coughlin says current Giants need to 'hang in there'
Jones passes concussion protocol, will play Sunday for Giants
Rangers' Ryan Strome in COVID-19 protocol
Robinson back on the court for Knicks' preseason finale
Fox set up for a huge contract extension
Islanders bent on correcting sloppy mistakes of opening loss
Didn’t find what you were looking for?