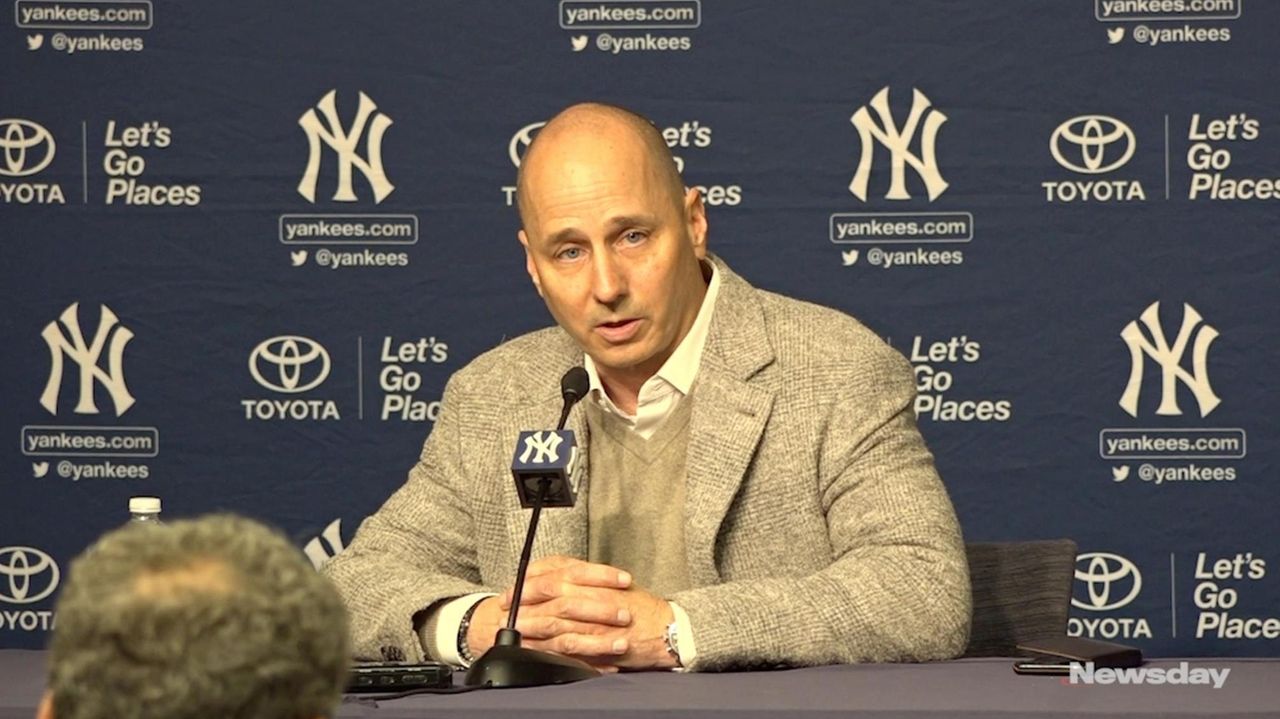 Yankees manager Aaron Boone and general manager Brian Cashman talked about what they need to address moving into the offseason as their season-ending news conference on Oct. 12, 2018.  Cashman annouced that shortstop Didi Gregorius will undergo Tommy John surgery this offseason. Credit: News 12 The Bronx

The Yankees’ injury issues have followed them into the postseason.

Toward the end of Aaron Boone’s end-of-season news conference Friday came the disclosure that Didi Gregorius  soon will undergo Tommy John surgery to repair  a UCL tear in his right elbow.

While the timeline for a position player having the surgery generally is different from a pitcher – the latter’s recovery time  typically is  12 to 18 months – what is certain is this: The Yankees will be without one of their most valuable cogs for a good portion of 2019. Potentially, depending on the rehab process, they could be without him for the entire season.

“Tough news without question,” said general manager Brian Cashman, who spoke after Boone. “He’s a great player, he’s an important player for us, and we’re going to be without his abilities for a period of time, until sometime next summer. It’s our job to hold the fort until he does [return].”

Cashman did not give a timetable. Gregorius' double-play partner, Gleyber Torres, underwent Tommy John surgery in June 2017 and was ready to go in spring training. But it’s quite important to note that Torres had the procedure done on his non-throwing arm.

“It’s going to take the time necessary,” Cashman said. “Is it bring him back in June, July, August? I think it all depends on how it plays out. I’d rather not put a timeframe on it. We do expect to get him back and we expect him to return to the player we’ve been enjoying for quite some time.”

Those who already have concluded that  Gregorius' injury seals the deal of the Yankees going all-in on the Manny Machado sweepstakes this offseason might come away disappointed.

Cashman said Torres, a natural shortstop in the minor leagues before taking over at second this season in his rookie year, is among the “internal options” the Yankees would look to in filling Gregorius’ spot.

“We do, thankfully, have internal options, but the best option is Didi,” Cashman said. “Unfortunately, for a period of time, he’s got to take care of his health and we’ll wait on him. How we handle the waiting aspect is yet to be determined … We’ll evaluate all available options. Again, we’re going to get our shortstop back at some point. All of it is to be determined.”

Cashman said Gregorius, a standout defender who hit .268 with 27 homers and an .829 OPS this season, felt something wrong in the elbow during the seventh inning of ALDS Game 2. When leftfielder Andrew McCutchen misplayed Ian Kinsler's drive off the Green Monster at Fenway Park, Gregorius retrieved the ball in left, fired it back in, felt something on the throw and said something to the medical staff afterward.

During Game 4 on Tuesday night, when Cashman saw Gregorius skip two throws to first base -- both of which were scooped out of the dirt by Luke Voit -- he thought the worst. An MRI was taken  Thursday, and when it revealed a tear, it didn’t come as a shock.

“I thought about a worst-case scenario when I saw him bounce two balls in that final game,” Cashman said. “They were un-Didi-like. So in the back of my mind, I was like, ‘Oh, boy, I wonder if we have a real problem here.’ Unfortunately, the MRI confirmed that we do.”

The Yankees acquired Gregorius from Arizona as part of a three-team trade in December 2014. Cashman said a “partial” UCL tear turned up in the medicals the club reviewed but that it was “asymptomatic,” as evidenced by Gregorius' standout play during the past four seasons. It was only on the throw back into the infield, apparently, that it became symptomatic.

“On that throw is where he pinpointed it,” Cashman said. “That was the finishing off of something that was a sleeping giant, I guess.”

Surgery for CC. Cashman said CC Sabathia had arthroscopic surgery on Friday to "clean out" his troublesome right knee. Sabathia, 38, is a pending free agent and has said he plans to play at least one more year. Sabathia had the same surgery after the 2017 season.