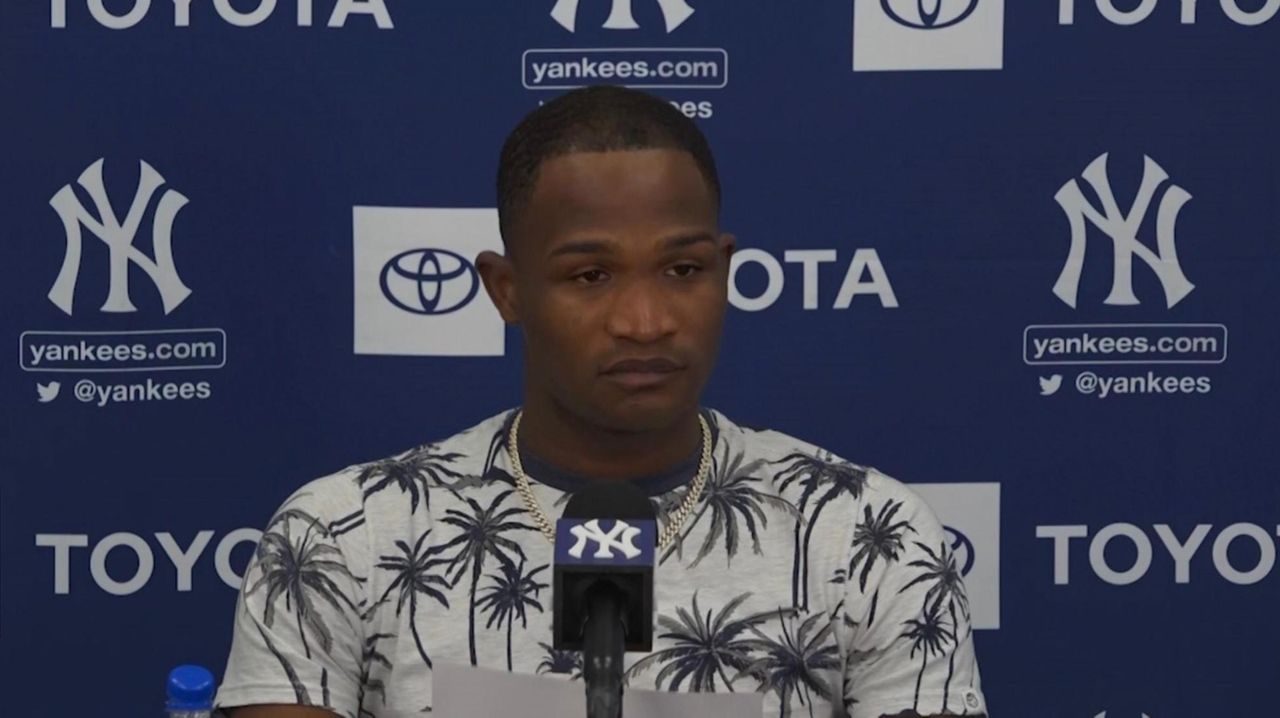 On Wednesday, Yankees pitcher Domingo Germán made a public apology for his actions in September of 2019. Credit: NY Yankees

TAMPA, Fla. – Domingo German did not offer much in the way of specifics.

At least not when it came to the events of the night in September 2019 involving his girlfriend that led to his 81-game suspension for violating Major League Baseball’s domestic violence policy.

"I don’t think I want to get into the details of what happened that night," German, 28, said through his interpreter Wednesday afternoon in his first public comments since the suspension. "I can say that my family and I went through a really tough moment. I understand you have to ask but I don’t think it’s the best moment to give out all the details."

German was officially hit with the suspension in January 2020 after an MLB investigation into the incidents that occurred at, and in the aftermath, of a charity event hosted by teammate CC Sabathia several months earlier. German, who went 18-4 with a 4.03 ERA in 2019, entered the spring expected to contend for a rotation spot after being welcomed back with open arms by the organization.

But comments by veteran reliever Zack Britton last Thursday indicated the welcome might not be as warm in the clubhouse and German, as a result, pushed back his scheduled meeting with reporters Sunday, wanting instead to first talk to his teammates.

"I want to take this opportunity, before answering your questions, to sincerely apologize to the Steinbrenner family, my teammates, the front office, and those around me who love me," German said at the onset of the video news conference Wednesday. "I have made mistakes of which I'm not proud of. And for that, I want to apologize."

German, who said he and his girlfriend "are doing well and are committed to each other, we are treating each other the way we should," was a little more detailed on the meetings with players, which took place Tuesday. Manager Aaron Boone said because of COVID-19 protocols there were two separate gatherings – with pitchers and catchers at the minor league complex and then later with position players at Steinbrenner Field – that lasted about 30 minutes each.

"I was able to speak to each player on the team yesterday," German said. "The only acceptable way to begin to move forward was to address them face to face. It is worth repeating what I told the team; there are a lot of young players who wear this uniform, and I want them to understand the great damage that can be done when mistakes like mine have been made."

Mistakes that did not go over well in some corners of the clubhouse.

"Sometimes you don’t get to control who your teammates are, and that’s the situation," Britton said Thursday. "I don’t agree with what he did. I don’t think it has any place in the game or off the field at all."

Britton was among those German spoke to one-on-one.

"I understood where he was coming from," German said. "I did speak to him personally, and we are good teammates. The comments were not meant to be taken personally. He gave me some good advice."

Luke Voit suggested German’s work might not be done.

"He's my teammate, obviously, he's a friend, so we'll be there for him," Voit said. "But we don't condone it and he messed up, and a lot of guys look at him differently now. But I believe in second chances, and the guy deserves a second chance and I hope he's taking the right steps to do what he needs to do better with his family and I'm grateful that he came and apologized yesterday to us and to the organization."

"At the same time, it's what are you going to do with that mistake?" Stanton said. "[Hopefully] you're going to improve and look to improve to make everyone around you better and improve yourself. You can show that, and he looks determined to do so."

For now, German finds himself in a competition for an open spot in the rotation.

"He has done enough to earn the opportunity to be here and to compete and to be a part of this team," Boone said. "Now the proof is in the daily life that he leads, and we're certainly going to do all we can to support him and help him to become the best version of himself possible. But now the proof will be in the days ahead."