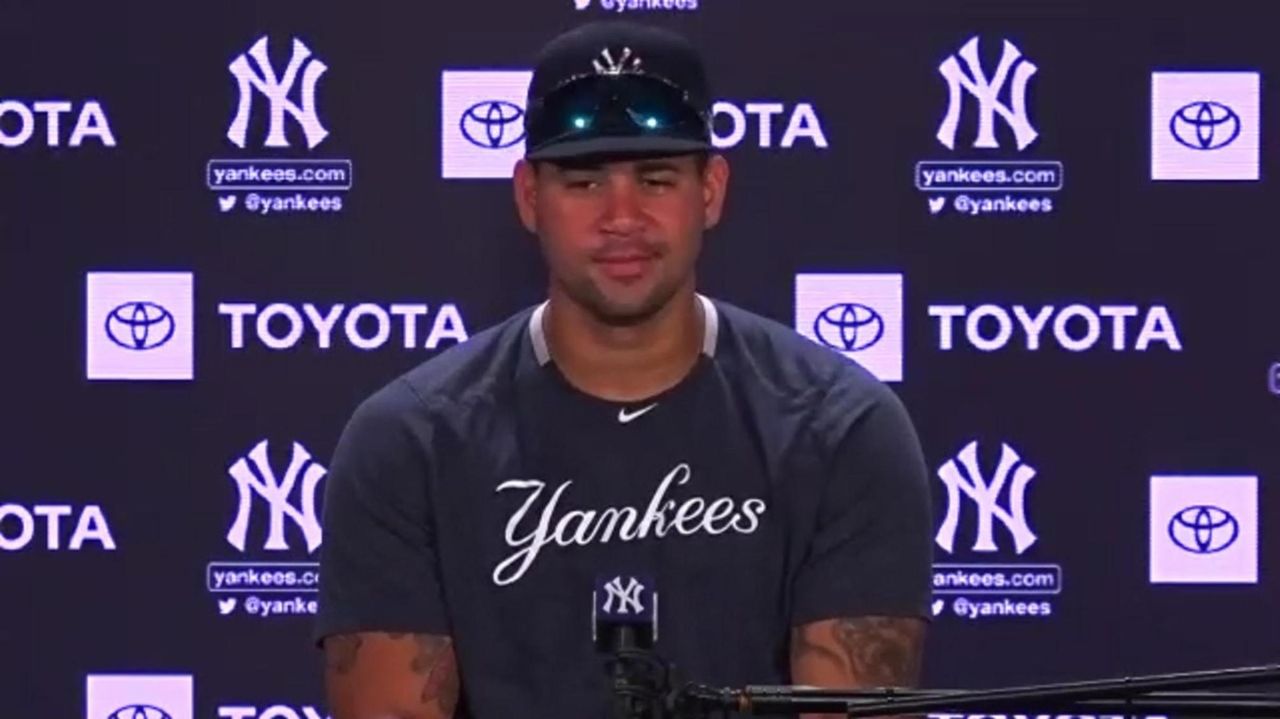 During a news conference on Wednesday, July 15, 2020, Gary Sanchez said of the new catching stance, brought to Yankees by new catching coordinator Tanner Swanson: “Definitely feel much better now comparing the time back when we started in spring training.” Credit: New York Yankees

There were some growing pains in spring training for the catcher as he learned the new one-knee-down catching stance brought to the organization by new catching coordinator Tanner Swanson, formerly of the Twins.

And well over a week into Spring Training II at the Stadium, Sanchez said he is finally getting a grasp of it.

“Definitely feel much better now comparing the time back when we started in spring training,” Sanchez said Wednesday through his interpreter. “It’s just, overall, you have more time practicing the new stance and working with the new stance.”

The primary benefit – in theory – of the stance, which Twins catcher Mitch Garver credits for his rebirth, is that it allows catchers to “steal” more strikes on borderline pitches the lower part of the strike zone.

“I definitely feel the improvement,” Sanchez said. “I want to say I have definitely gotten better, especially with pitches low in the zone. At the same time, we still have a lot of work to be done ahead of us. But that's why we're here, to keep (working).”

Sanchez made some strides in the spring with the stance but was also limited in the work he could put in for the week leading up to the official suspension of spring training, which occurred March 13.

Sanchez dealt with back soreness the first week of March and shortly after was diagnosed with the flu (not COVID-19). And so, the bulk of the work Sanchez put in on the stance took place at his home in his native Dominican Republic during the nearly four-month hiatus caused by the coronavirus pandemic.

“My back held me back a little bit (in the spring), which kind of prevented me from going at it the way I wanted to,” Sanchez said. “The last three months I went back to the DR and worked really hard on it, and all of that I think has helped me get to the point where I am today.”

Swanson said he was in touch with Sanchez “weekly” during the quarantine.

“He would send me video and I’d provide feedback and occasionally we’d jump on a zoom call together and discuss certain variations of some of the positions and moves he was working through,” Swanson said Wednesday. “So I think overall the downtime was really positive because I think it allowed Gary specifically to kind of explore some of the positions and figure out how he could adapt them to his own style. We got to take advantage of some extra time and, ultimately, I think (it) will pay off.”

Swanson said the primary work with Sanchez since camp re-opened is getting the catcher to essentially have one receiving stance; not a specific one for when the bases are empty and another one for when men are on.

“Rather than have two very distinct stances, the goal has been to merge them together so we can learn how to block and receive and throw from one position” Swanson said, “And then from there create some different varieties out of that kind of base position. In a small sample (size) of Spring Training 1.0 and what we've been able to measure so far here in New York, the receiving metrics continue to grow and he's also been blocking on a very consistent rate, too. So far it's been really positive.”

Sanchez kept it simple in describing the difficulties he had with the stance in the spring.

“I think it's probably just getting used to something new, something that you've never done before and finding a way to find your comfort zone in a new stance of receiving,” Sanchez said. “Like I said before, it's a matter of just making the adjustments, keep working and eventually getting to where you feel really comfortable.”