CLEVELAND – It took the Yankees all of four pitches to declare which team was going to show up for the playoffs.

"We needed to set the tone for the series," said Cole, who grew up a Yankees fan. "To be able to deliver feels really good."

Masahiro Tanaka, who has delivered throughout his career in the postseason (5-3 with a 1.76 ERA in eight starts), can lead them into the Division round Wednesday night as he’ll be opposed by righthander Carlos Carrasco.

The Yankees, who limped into the postseason after losing six of their last eight games, outhit Cleveland, 15-8, getting homers from Judge, Gleyber Torres, Giancarlo Stanton and Brett Gardner, who had a starring role after getting the nod in left over fan-favorite Clint Frazier.

Torres, in a severe slump to end the regular season, went 4-for-4, including a homer, with a walk and three RBIs. His two-run shot with two outs in the fifth against Bieber made it 7-2 and ended the pitcher’s night. Gardner’s two-run homer highlighted a four-run seventh and Stanton’s lasered homer to left in the ninth made it 12-2.

And then there was Cole, signed to a record nine-year $324 million contract over the winter by managing general partner Hal Steinbrenner for exactly these kind of games. 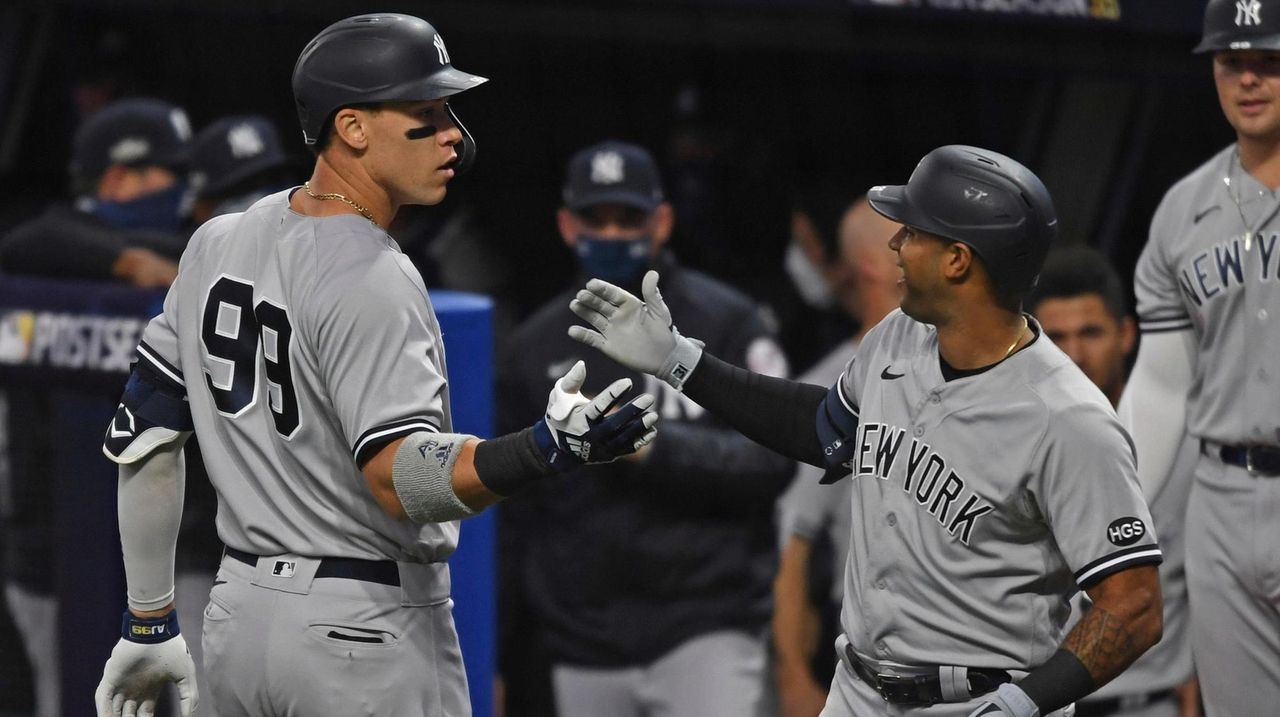 Again paired with Kyle Higashioka – the case in Cole’s last four starts of the regular season in which he went 3-1 with a 1.00 ERA with 34 strikeouts and five walks in 27 innings – the ace struck out 13 over seven innings in which he allowed two runs, six hits and no walks. Cole became the first pitcher to record 12 or more strikeouts in three postseason games, according to ESPN Stats and Info. His 13 strikeouts were the second-most by a Yankee in a postseason game, only behind Roger Clemens’ 15 in Game 4 of the 2000 ALCS in Seattle.

"The stakes," Cole said Monday, when asked what he liked best about taking the ball in October.

Asked to expand on the answer, Cole cracked a smile.

Tuesday those stakes were about as high as they come.

There isn’t much room for error in a best-of-three series, and even less room for error against Bieber, who went 8-1 with a 1.63 ERA in 12 games and won the pitching triple crown (wins, ERA and strikeouts).

But Bieber, making his first career postseason start, wasn’t the pitcher who dominated lineups in the regular season, allowing a season-high seven runs (he allowed 14 runs total all year) and nine hits over 4 2/3 innings. Bieber, who never allowed more than three runs and never struck out fewer than eight in any of his starts, struck out seven.

The Yankees went with an aggressive approach against Bieber, who struck out 122 batters in 77 1/3 innings, and were rewarded.

"The at-bats up and down the order…I just felt the swing decisions were really good," Boone said of his club not going outside the strike zone. "And that’s the key against Bieber. You have to make good swing decisions and I felt the guys did that all night long."

Starting immediately as DJ LeMahieu led off the game by lining a 2-and-0 fastball to right for single.

Judge, with just one extra-base hit (a double) in his final 10 games after returning from the injured list, pounced on a first-pitch fastball, launching the 94-mph delivery to right-center, the ball just getting over the wall for the outfielder’s ninth career postseason homer.

It was a jarring start to the game for Cleveland and Beiber, who allowed exactly one first-inning run – and just three first-inning hits – all season.

"The biggest thing is we got mistakes and we didn’t miss them," Judge said. "That’s the biggest thing when facing a Cy Young pitcher. (like that), you get those mistakes, you have to do damage on them."

Lennon: Gerrit Cole proves to be splendid investment by YanksExpensive free agent proves his worth going head-to-head against Cleveland's Shane Bieber in Game 1 win. Gardner's big night validates Boone's hunchStarting in leftfield over Clint Frazier, Gardner goes 3-for-5, including RBI double and a two-run homer. Game 1 photos: Yankees vs. ClevelandSee the scenes from Game 1 of the Yankees' wild-card series in Cleveland.

Gauthier not yet making most of his scoring chances
Zdeno Chara ponders what may be final return to Ottawa
LIers return home with AEW at UBS Arena
Will MLS Cup appearance help NYCFC get its own stadium?
Trotz receives valuable info on COVID shutdowns from Ottawa coach
Nets face challenge of containing Doncic in road trip opener
Didn’t find what you were looking for?