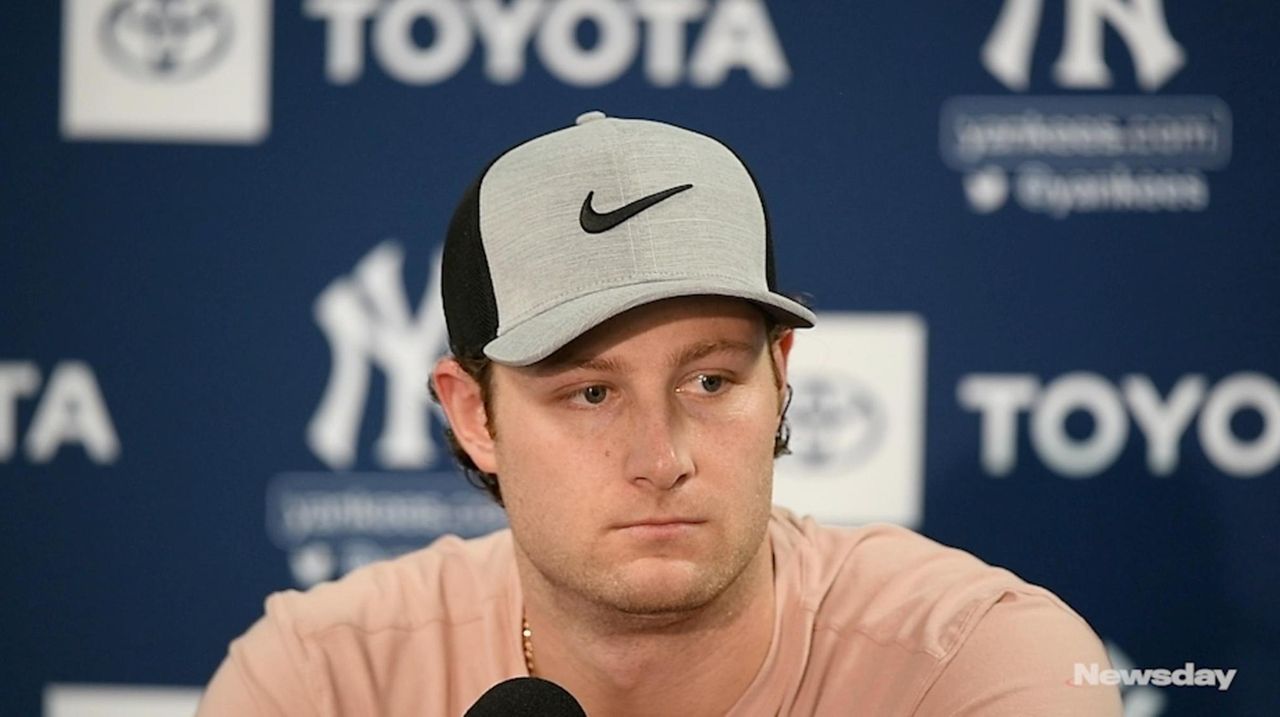 Yankees manager Aaron Boone and starting pitcher Gerrit Cole discuss the start of spring training about the Astros' sign-stealing scandal and what is to come ahead of Opening Day during a news conference in Tampa on Feb. 13, 2020. Credit: Newsday / John Conrad Williams Jr.

TAMPA, Fla. — In his time with the Astros, Gerrit Cole said he observed nothing untoward.

More specifically, nothing in relation to the sign-stealing topic that, much to the chagrin of Major League Baseball, doesn’t seem to have an end in sight.

“I wasn’t [aware of anything],” Cole said on his first official day as a Yankee after signing a nine-year, $324 million free-agent contract in December. “I wish I could elaborate, but no, I wasn’t.”

Cole was an Astro in 2018 and ’19, so he wasn’t with Houston for the bulk of the time that was covered in commissioner Rob Manfred’s report last month, which focused on the Astros’ illegal sign-stealing primarily from 2017. But 2018 also was mentioned in the report, and more than a few in the game, including plenty of Yankees players and staff, believe it occurred last season as well, including during their six-game loss to the Astros in the ALCS.

Jose Altuve hit a walk-off homer off Aroldis Chapman in the ninth inning of Game 6 to send the Astros to the World Series, and it has been speculated that Altuve was wearing a wire and knew a slider was coming. The Houston second baseman again denied that Thursday.

Was Cole aware of anything going on last season, specifically relating to the wearing of some kind of wire/buzzer apparatus? “I wouldn’t have seen it or been privy to that information anyway, but I believe my ex-teammates, I believe in those guys,” he said.

Like many of the Yankees, Cole paid attention to the Astros' news conference Thursday morning, which did not publicly play to rave reviews.

“Nobody’s getting a win out of this,” Cole said. “It doesn’t look very good and I guess I’m fortunate to be here and move past it and get to experience all the great things about coming to a new team.”

Yankees players haven’t tried to hide their anger regarding the Astros — the case across the sport — but Cole said he’s detected none of it.

“I haven’t gotten any vibes like that,” he said. “Certainly these are my teammates, so we’ll have many conversations along the way, and if that happens to be one of them, I’ll just give an honest answer, which is I had no idea of any of it going on and didn’t see any of it. So I don’t think I have much to apologize for.”

Cole’s news conference was not entirely, or even overwhelmingly, about his former team. It was mostly about his current one, a group that is the prohibitive favorite to win the AL pennant and a co-favorite with the Dodgers to win the World Series.

Cole, who grew up a Yankees fan and was even drafted by them but didn’t sign in 2008, said he has felt some of the excitement his signing created among a fan base that always has the highest expectations.

“For some reason there’s this buzz that’s just like permeating through my life, whether I’m looking for it or not,” he said with a smile. “And it feels really good. I’m enjoying it. I appreciate the fan base, obviously being a Yankees fan as a kid. The relationship this team has with its fans is one based on accountability and honesty and trying to win a championship every year. I’m excited to try and live up to that every day.”

And after being on a team that lost in Game 7 of the 2019 World Series, that championship chase is priority No. 1.

“It drives me a lot,” said Cole, who went 20-5 with a 2.50 ERA and finished second to Astros teammate Justin Verlander in the American League Cy Young Award voting. “The free-agent process got done really, really quickly, so you mix that excitement with that bad feeling you have from losing and you get somebody that’s really champing [at the bit]. I’m ready to go right now and take care of business.”

“. . . I had no idea of any of it going on and didn’t see any of it. So I don’t think I have much to apologize for.” — Gerrit Cole on the Astros’ sign-stealing scheme

Yankees spring training photosScenes from Tampa, Florida, as the Yankees embark on the 2020 MLB season with spring ... Yankees' Cole makes big first impression on BooneAfter Cole finished his 25-pitch session he spoke to Boone, who was very impressed with his ace's professionalism and attention to detail.