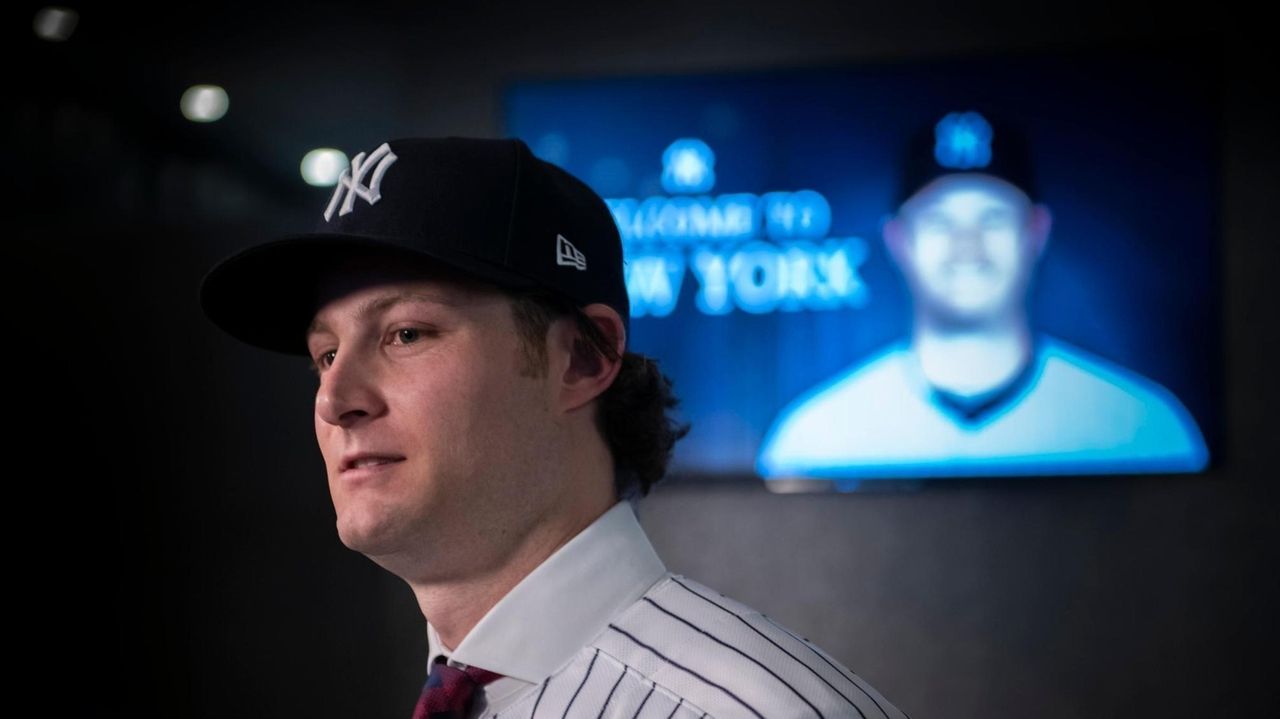 The Yankees introduced their new ace pitcher Gerrit Cole at Yankee Stadium on Dec. 18, 2019. Cole originally was drafted by the Yankees in 2008, but he chose to attend UCLA. Cole, 29, grew up a Yankees fan in southern California. He went 20-5 with a 2.50 ERA last season for the Astros. Credit: Corey Sipkin

Cole reached under the podium and pulled out the sign he brought to Yankees World Series Game 6 in 2001 when he was a youth. That sign, photographed in 2001 by William Perlman, then of the Newark Star-Ledger and now of Newsday, has faded over the years, but the words remained bold and clear: “YANKEE FAN TODAY TOMORROW FOREVER.”

What never faded was the Yankees’ desire to land Cole. Eleven years after they drafted him out of high school (and he went to UCLA instead), and two years after general manager Brian Cashman tried and failed to trade for Cole, the 29-year-old righthander signed a nine-year deal worth $324 million.

“That’s great,” Steinbrenner could be heard saying. “You kept it.”

“It was my dream,” Cole said about why he chose the Yankees. “I had a second opportunity to chase it.”

The contract, the richest ever given to a pitcher, includes an opt-out clause after the 2024 season. Just in case the dream doesn’t work out … or Cole is so good he thinks he can make even more money at that point.

The Yankees would probably be OK with that.

According to The Athletic, if Cole opts out, the Yankees can void the opt-out by adding an extra year and $36 million to the contract. That would make it a 10-year, $360-million deal.

The Yankees pulled out all the stops in recruiting Cole to the Bronx. They gave him a 30-pound box that opened to reveal a tablet that included videos and messages about the Yankees, their history and program, and a Yankees cap that Cole said he wore for “about three days” after agreeing to the contract.

The Yankees had Cole talk with Andy Pettitte about life as a Yankee. They gifted him a $900 bottle of Italian wine that Cole had once mentioned to Yankee Stadium visiting clubhouse manager Lou Cucuzza as a lovely merlot he shared with Amy once on an anniversary trip to Florence.

And they also offered him $324 million in a negotiation that all parties agreed took about 48 hours from first offer to acceptance.

The Yankees think he’s worth it. Cole gives them the ace they hope is the last piece to a World Series-winning roster. The Yankees won 103 games last season but fell to the Astros in six games in the ALCS, with Cole winning Game 3 of the series at the Stadium.

“We certainly hope so,” manager Aaron Boone said if Cole was the missing piece.

To make room for Cole on the Yankees’ 40-man roster, righthander Chance Adams was designated for assignment.

On Wednesday, a clean-shaven Cole put on a Yankees No. 45 jersey, the number that had belonged to first baseman Luke Voit. (Voit tweeted on Wednesday that he will wear No. 59, his brother’s number when he was captain of the Army football team; Cole declined to say what accommodation he had made with Voit to get the digits.)

“He cleans up nice, doesn’t he?” Boone said.

Cole, a southern California native who grew up a Yankees fan in the shadow of Angels Stadium, went 20-5 with a 2.50 ERA last season and finished second to teammate Justin Verlander in AL Cy Young Award voting. He soars to the head of a Yankees rotation that includes Luis Severino, James Paxton, Masahiro Tanaka and J.A. Happ, but the Yankees may trade Happ this offseason to lower their payroll.

Steinbrenner was asked what would make his $324 million investment in Cole worth it.

“We need to win some championships,” he said, emphasizing the plural. “And I believe we’re going to do that — sooner rather than later.”

Oh, and the sign. After some unknowing Twitter chatter suggested the sign wasn’t the original, Cole explained that it was and where it had been all these years.

“That’s the same one,” Cole said. “It’s 18 years old. I had it on my wall for a few years. I think that’s why it faded. I tucked it in my closet. My folks brought it down after we came to terms . . . I just decided I should probably bring it to New York.”

Cole revealed that he didn’t make the sign. It was actually made by another family who was staying in the same hotel during the 2001 World Series, which the Yankees lost in seven games to the Arizona Diamondbacks. That family gave the sign to Cole, who brought it to the Stadium.

“I wish I could remember their names,” Cole said. “I talked to my dad this morning to see if he could remember it, but we couldn’t. But I kept the sign. I love the sign.”

Yankees introduce free-agent pitcher Gerrit ColeThe Yankees introduced their new ace pitcher Gerrit Cole at Yankee Stadium on Dec. 18, ... Photos: Gerrit Cole joins the YankeesCole signed a nine-year deal worth $324 million. Why Cashman is convinced Cole can handle playing in New YorkThere are more than a few examples of players who could not cut it with the Yankees, but Cashman doesn't see that happening with Cole. Cole gives Yanks what they were missing in championship questWith Hal Steinbrenner willing to surpass the highest luxury tax threshold, Brian Cashman was all-in for the game-changing righthander.

Rangers ink Nemeth to three-year deal at start of free agency
Oregon's Duarte on radar as Knicks shop picks
LI's Capobianco on winning silver medal: 'It just feels unreal'
US bounces back from Olympic-opening loss, routs Iran 120-66
Olympic medal winners from Long Island
Source: Scherzer to Mets 'not happening'
Didn’t find what you were looking for?