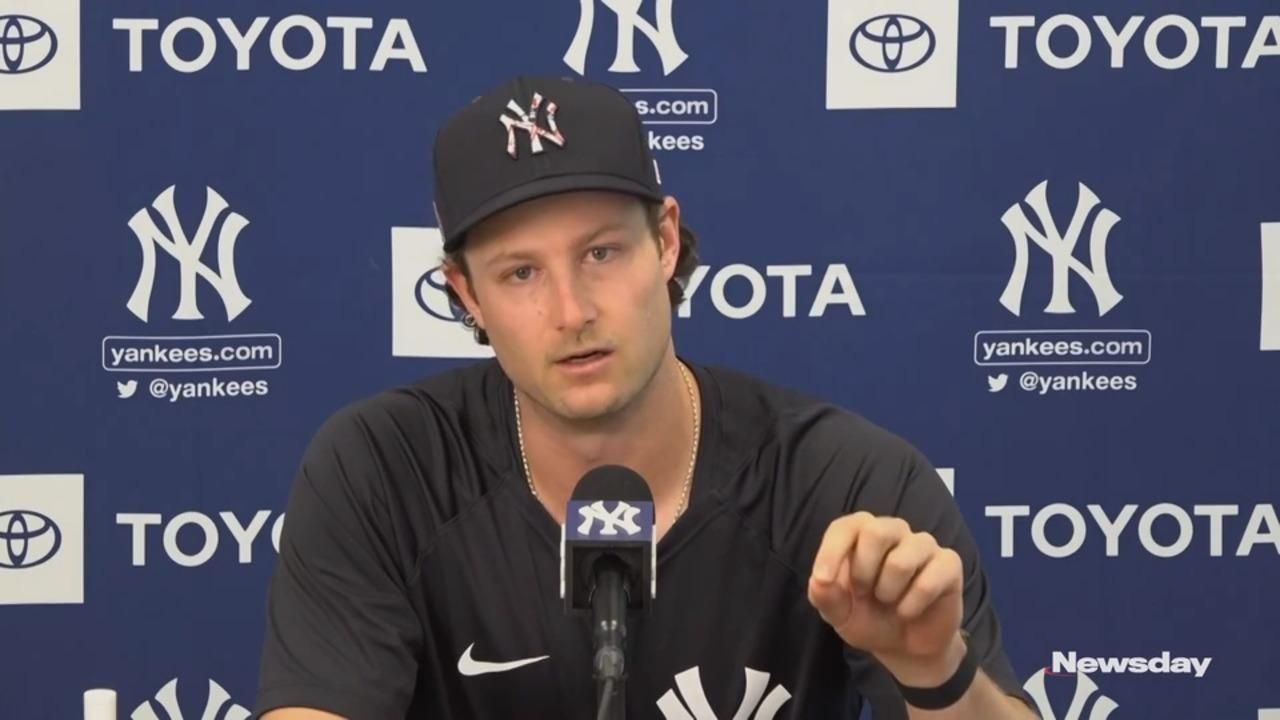 Gerrit Cole, Yankees ace righthander and part of the executive leadership of the players' union, was asked Tuesday during spring training about his thoughts on the proliferation of analytics in baseball. Hear his answer on that and service time manipulation.

TAMPA, Fla. – Gerrit Cole is sick of it.

And the ace righthander, recently elected to the players’ union’s eight-man executive subcommittee – the MLBPA’s highest-ranking policy board for players – offered a warning Tuesday to his colleagues in the game as another round of what’s expected to be brutal collective bargaining agreement negotiations with MLB beckons next winter.

"Every player," Cole said, "should wake up and read the news on the guy [from] the Mariners."

The "guy" was Kevin Mather, the longtime president of the Mariners who was forced to resign Monday after controversial comments of his came to light, more than a few of them relating to a topic the MLBPA has railed against for years – the manipulation of service time for some of the young stars in the game. In other words, delaying those players’ ascension to the majors to preserve a club’s control of said player for an extra year before they can become free agents. The Cubs, perhaps most famously, did this in 2015 with Kris Bryant, who hit .425 with nine homers in 14 games in spring training but nevertheless wasn’t called up until eight games into the regular season, thus giving the team the extra year of control.

Clubs have long denied the practice – which is not technically against the rules of the current CBA– but Mather admitted to it, almost giddily it seemed.

For Cole, Mather wasn’t just speaking for the Mariners.

"Those conversations are being had and, unfortunately, that's the kind of way a lot of clubs are acting," Cole said. "I don't know if there's a rule that's going to be able to fix that because somebody would just probably find a way around that rule. As an industry, I'd like to just see us move past that. That's just not productive for anyone. It’s not productive for the product. You're not putting the best players on the field for people to see."

Mather’s comments, made to a local Rotary Club earlier this month that just became public, also included the belittling of the English skills of two foreign-born players in his organization.

In part of a statement released Monday, the MLBPA called the Mather video: "a highly disturbing yet critically important window into how Players are genuinely viewed by management. Not just because of what was said, but also because it represents an unfiltered look into Club thinking.

Added Cole: "This guy's talking about players that are making him money. The product is the people that he's talking poorly about. It’s just tired. It’s tired, man, and I think players are over it. And if they haven't been awakened to that type of behavior, that's what goes on. I don't really know how to fix it. I just know I don't like it."

Aaron Judge, two years away from free agency if he and the Yankees don’t work out an extension before then – the outfielder said on Tuesday he and the club did not have any discussions along those lines this offseason – called Mather’s remarks "tough to hear."

The last time the topic directly involved the Yankees was spring training 2018, when Gleyber Torres, then one of the top prospects in the sport, was in contention for a roster spot. The speculation was the Yankees might keep him in the minors the first 20 days of the season to give them the extra year but Torres had a lousy spring, hitting .219 with a .598 OPS in 13 games, making the call an easy one to start him at Triple-A Scranton/Wilkes-Barre. Torres, after a red-hot start in Scranton, made his big-league debut April 22, 2018.

"I'm fortunate to be in an organization where we don't do that or play that," manager Aaron Boone said, adding later there can be some "gray area" in determining when a player is big-league ready. "When guys are ready, or we feel like they're ready to impact the club, that's that. And that's how we treat things around here."