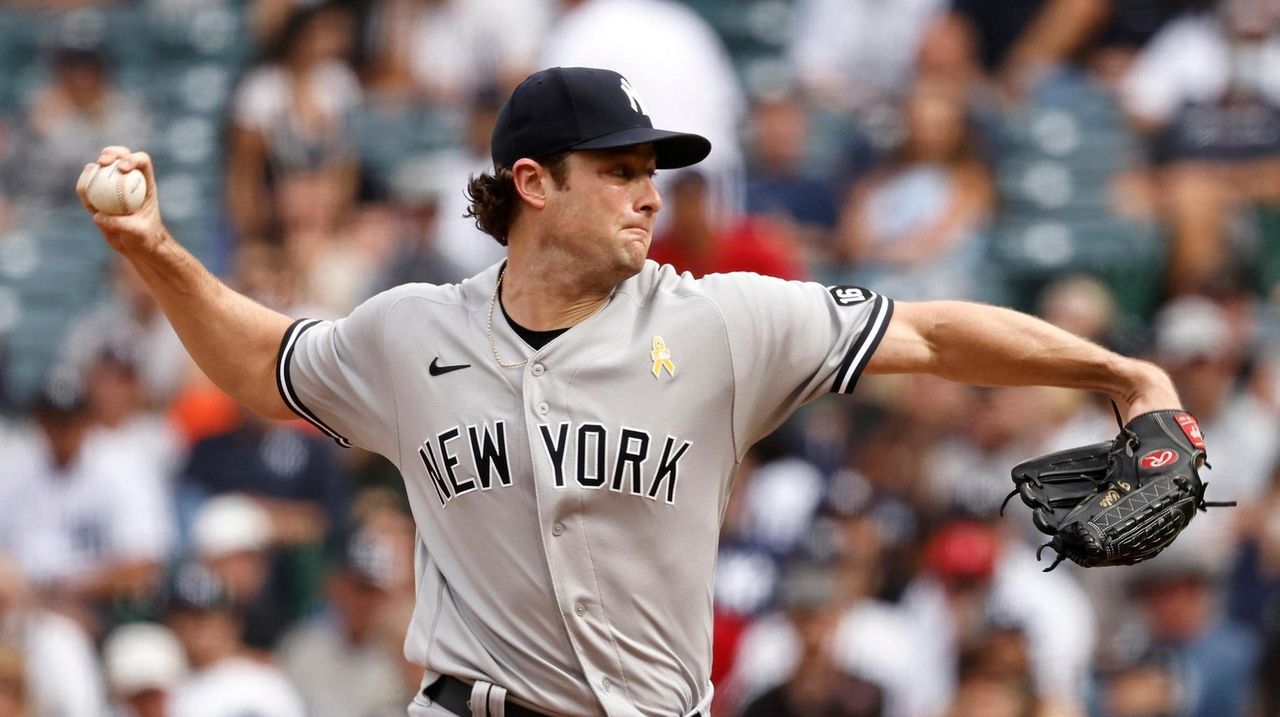 Gerrit Cole was dominant in the Yankees' 4-1 win over the Angels in their series finale on Wednesday, striking out 15 over seven electric innings. Newsday's Erik Boland has more from Anaheim. Credit: Newsday / Erik Boland

With his club stumbling a bit after a 13-game winning streak, the righthander made sure the Yankees’ four-game losing streak stopped there, striking out 15 in seven electric innings Wednesday night in a 4-1 victory over the Angels at Angel Stadium.

"Just complete domination," Aaron Judge said. "That's what we needed out of our ace today, especially after the long [winning] streak . . . and the last four games just not getting the job done. He’s our guy. That’s who we want on the mound any situation we need to come out with a win, and he showed it tonight. All his pitches were working. I felt like he was in control the whole game."

The Yankees (77-56), who finished this three-city, nine-game trip with a 5-4 record, pulled within seven games of the AL East-leading Rays and stayed two games ahead of the Red Sox, who beat Tampa Bay on Wednesday, for the AL’s top wild-card slot.

"Dominant," Aaron Boone said. "He's obviously had some really good ones in his career, and certainly with us the last two seasons, that for me was up there. I mean, that was a guy in control. I felt like a step ahead of those guys all day. I felt like his fastball was probably as good as it's been all year. And just had a little bit of everything going."

Cole’s fastball in particular contributed to those 15 strikeouts — he induced a career-best 32 swings-and-misses overall, according to YES — and the performance gave him nine games with double-digit strikeouts this season, tying him with David Cone (1998) for the most such games in franchise history.

"I was putting it [the fastball] pretty much where I wanted to," said Cole, who struck out Shohei Ohtani, a terrific fastball hitter, three times on fastballs of 98, 99 and 99 mph. "Good day for the fastball."

The Yankees got a big two-out, two-run single from Luke Voit in the third, a two-out RBI single by Brett Gardner in the fourth and Judge’s 30th homer in the eighth, a rocket to left that made it 4-1. Judge went 2-for-3 with a walk and wound up 18-for-36 with three home runs and 10 RBIs on the nine-game road trip.

The Angels (66-68) got to Cole in the sixth when Jack Mayfield led off with a single and David Fletcher laced an RBI double into the gap in left-center to make it 3-1. Cole, however, struck out Ohtani for the third time, got Phil Gosselin swinging at a slider and fanned Jared Walsh — on his 101st pitch — with a 100-mph fastball.

Cole, who credited catcher Kyle Higashioka and his game plan, struck out two more in the seventh, ending it at 116 pitches, his second-highest total this season behind the 129 he threw in a 1-0 complete-game win July 10 at Houston.

"I don't know if it's as much me helping as him just pitching great right now," Higashioka said. "His fastball was electric. And he was throwing the off-speed [pitches] right off of that and it just kept everyone off-balance."

"I actually thought his bullpen was pretty bad," he said. "But that's usually an indicator that he's going to have a great game. So as soon as he struck out Ohtani the first time, I was like, ‘OK, he's dialed in.’ "