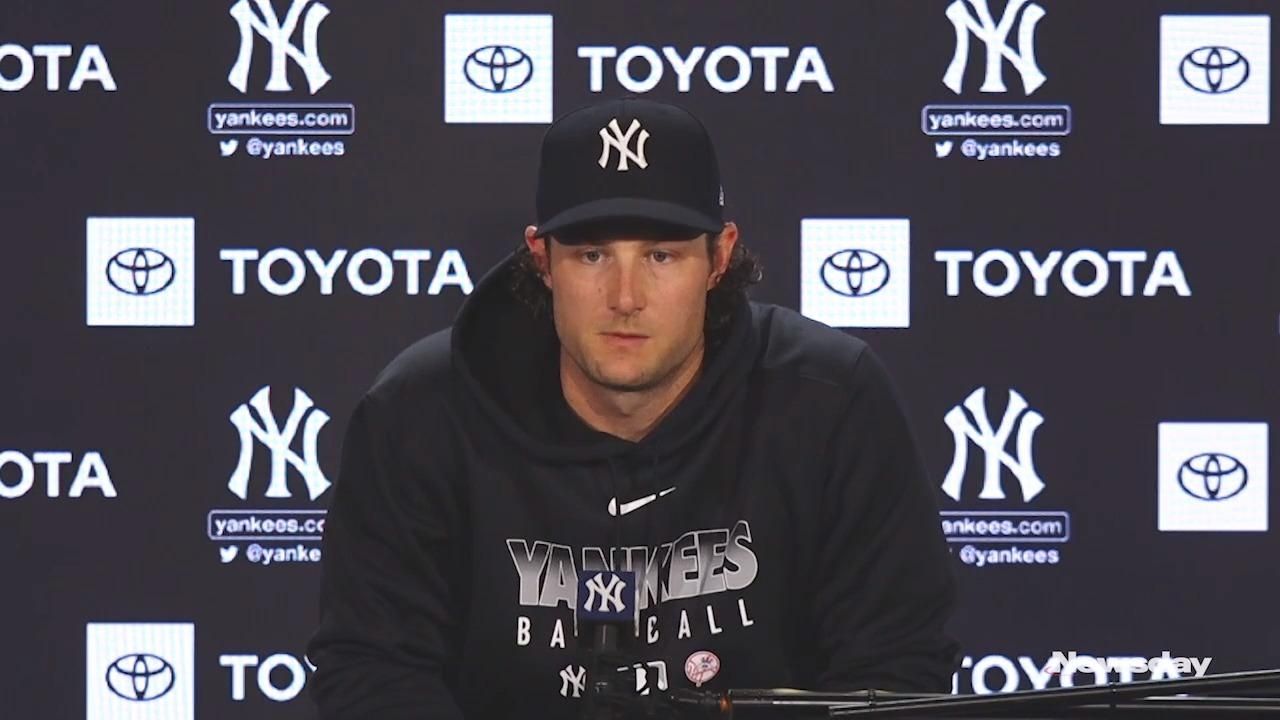 After an early home run to Miguel Andujar, Yankees ace righthander Gerrit Cole did not allow a hit and ended up retiring the last nine batters he faced Tuesday night in an intrasquad game at Yankee Stadium on July 7, 2020. Credit: New York Yankees

Moments before squaring off against Gerrit Cole last Thursday at the Stadium for live batting practice, Aaron Judge glanced at the mound.

“When I stepped in the box, facing him the first time, I tried to give him a, ‘Hey, G, how’s it going?’” Judge recalled Monday with a smile. “He just looked right through me. That shows you what kind of competitor he is. It doesn’t matter if it’s practice or live BP or the game, he’s the real deal.”

A pitcher who treats every baseball activity — bullpens, live BPs, simulated games, routine games of catch in the outfield, etc. — like the real thing.

It was evident in his first side session in spring training in February, evident when he faced Judge (along with Luke Voit and Aaron Hicks) last week — and hit 99 mph with his fastball — and was evident again Tuesday night when the ace righthander started in the Yankees intrasquad game. Cole, who signed a record nine-year, $324-million offer over the winter to at last join the team he grew up rooting for, allowed one run, one hit and two walks with six strikeouts over five mostly crisp innings of a 1-0 loss.

And don’t think the one run didn’t bother him afterward.

“I was trying to win,” Cole said evenly. “Unfortunately, we lost.”

He struck out leadoff man Mike Tauchman on four pitches, then allowed a first-pitch homer to right to Miguel Andujar. Clint Frazier and Mike Ford went down looking at fastballs to end the 19-pitch inning. Cole did not allow another hit after Andujar’s blast and ended up retiring the last nine batters he faced. Cole threw 67 pitches, 43 strikes.

“He’s something special,” said Judge, who was on Cole’s team Tuesday night and watched the pitcher work from rightfield. “It was fun facing him on Thursday as the first live BP that I had in quite a few months. So to see the best in the game was pretty fun right out of the gate. He’s such a competitor.”

Said Cole: “It was nice to get through five [innings]. We were efficient. Bounced back from a couple of walks well. And overall the location was pretty good.”

Voit, who also avoided facing Cole Tuesday as he was on Judge’s team, said the pitcher “looked like he was in midseason form already” last week.

“He was locating,” Voit said Tuesday. “The thing with him is he’ll make a bad mistake but that’s like in the dirt. And his good pitches are elite pitches. He doesn’t miss.”

Voit is 1-for-4 in his career against Cole, the one hit a home run.

“They always say in the big leagues that you get one pitch where the pitcher is going to miss,” Voit said. “I’ve faced him [four times] and I feel like I might have gotten one in those at-bats, which is crazy. He does his homework on us and we’re on his team.”

“Maybe partly his intelligence and his aptitude and his ability to, throughout his career, be able to make adjustments from being a first pick [in 2011] to going on to be an outstanding pitcher with the Pittsburgh Pirates, and kind of evolving into an even greater pitcher when he went to Houston,” Aaron Boone said of what separates Cole from others.

“The ability to change some things from a repertoire standpoint. And I think he really understands his body and how to get himself in great shape and not only to enhance all his physical qualities on the mound, but also has allowed him to stay relatively healthy and strong. I think he understands himself in that way really well.”

“But when you really boil it all down, it's four elite pitches with an outstanding athletic delivery and a killer instinct and a desire to be great at his craft,” Boone said. “You add those things all up and you’ve got the game’s best.”