Giancarlo Stanton #27 of the Yankees watches his two-run home run fly over the wall during the seventh inning against the Toronto Blue Jays at Sahlen Field on June 17, 2021 in Buffalo. Credit: Getty Images/Joshua Bessex

BUFFALO — The momentum swung like a pendulum on PEDs Thursday night, first in the bottom of the sixth inning and then in the top of the seventh.

First there was the two-run homer that wasn’t. On Cavan Biggio’s drive to right in the sixth, Aaron Judge used, and needed, all 6-7 of his frame to leap at the wall and make a catch that kept the Yankees’ deficit at one run.

Then the two-run homer that very much was — Giancarlo Stanton’s two-run laser blast to right in the seventh. That provided the go-ahead run in an 8-4 win over the Blue Jays that completed a three-game sweep in front of another overwhelmingly pro-Yankees crowd of 7,288.

"He saved two runs and I hit two runs, so we basically did the same thing," Stanton said with a smile.

Gio Urshela had three hits, including a two-run homer, and had a second two-run homer overturned in the ninth (it was just foul). Chris Gittens drove in three runs with a pinch-hit two-out, two-run single that capped the four-run seventh and a sacrifice fly in the ninth.

And by the way, the Yankees (36-32) turned their second triple play of the season.

The Yankees finished this three-city, eight-game trip 5-3 and showed signs throughout the series of becoming the offensive club they were expected to be from the start of the season.

"This was a big series for us," Aaron Boone said. "A good team, we’re playing a division rival, a team that’s beaten us a little bit already this year. To come up here after a tough weekend [in Philadelphia] . . . It was exciting to pull this out."

The Yankees, of course, still have their own issues. One of them, injuries, struck again Thursday night.

Gleyber Torres, who had a fairly active first three innings in the field but didn’t appear at any point to be in discomfort, was pinch hit for by Rougned Odor in the fourth. He left the game with left lower back stiffness, the team announced. The severity of the injury likely will be determined Friday when Torres undergoes further evaluation, though Boone said Torres "said he felt good."

"Doesn’t look like it’s anything too serious," Boone added.

Toronto took a 4-3 lead in the sixth on Randal Grichuk’s RBI single off Chad Green. Biggio then skied one to right. Judge drifted back, reached the wall and perfectly timed his jump to make the catch, body fully extended vertically.

"It was amazing," Gittens said. "Like at first, we couldn’t really see it. And I heard, I don’t know if it was James [Jameson Taillon[ or Monty [Jordan Montgomery] was like, ‘Oh, my God.’ Then I looked over and he had the ball." 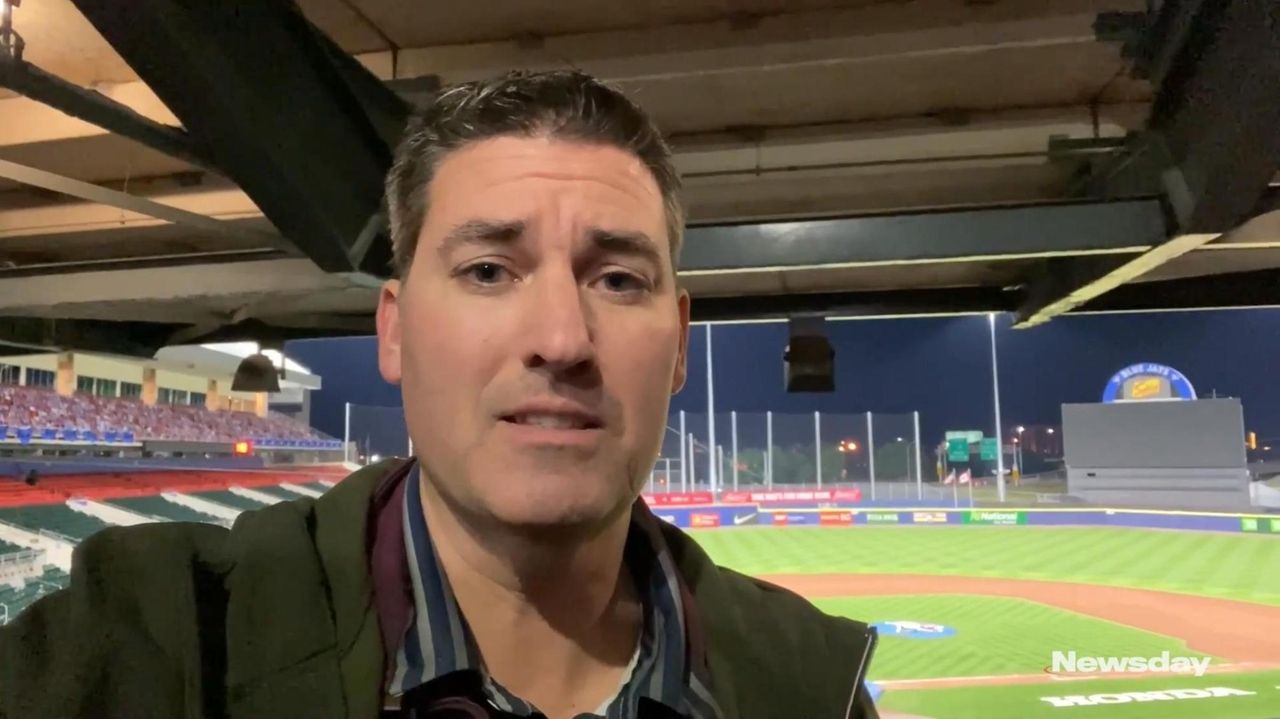 Why Yanks may be turning corner with sweep of Jays The Yankees capped their three-city road trip with a three-game sweep of the Toronto Blue Jays in Buffalo, perhaps a sign they are righting the ship after a rocky start to the season. Newsday's Yankees beat writer Erik Boland discusses Friday's win and more. Credit: Newsday / Erik Boland

Urshela had a terrific all-round game, doubling and scoring in the second before crushing a two-run homer in the third to make it 3-0. He also backhanded Lourdes Gurriel Jr.’s grounder in the fourth, which carried him into foul ground, and threw a strike to DJ LeMahieu at first for the out.

Still, the defensive highlight of the night for the Yankees came in the first.

Marcus Semien led off with a walk, Bo Bichette reached on an infield single and both moved up on a wild pitch. Vladimir Guerrero Jr., who brought a .343 batting average, 22 homers, 56 RBIs and a 1.129 OPS into the game, got ahead 3-and-0 before topping a full-count sinker to the third-base side of the mound.

Michael King got the out at first, and with Semien retreating to third and Bichette only a few steps from third, LeMahieu threw the ball to Torres, who fired home. After a short rundown, Semien was tagged out by Urshela, who then flipped to Torres covering third for the first 1-3-6-2-5-6 triple play in MLB history. The close play at third was upheld after a review.

"I called it my Houdini act," King said. "It’s good luck and poor baserunning by them. Glad I escaped it . . . I was trying to minimize the damage and got the best possible outcome."

Taillon credits bad start for recent turnaround
Gil comes up from minors and throws blanks as Yanks rout O's
Lennon: It's an emotional big-league debut for LI's Stephen Ridings
Walker's woes continue as Mets fall to Marlins
Mets notes: Nimmo back in lineup for real, Castro negative, Pillar wins award
Knicks manage to bring back Gibson on 1-year deal
Didn’t find what you were looking for?