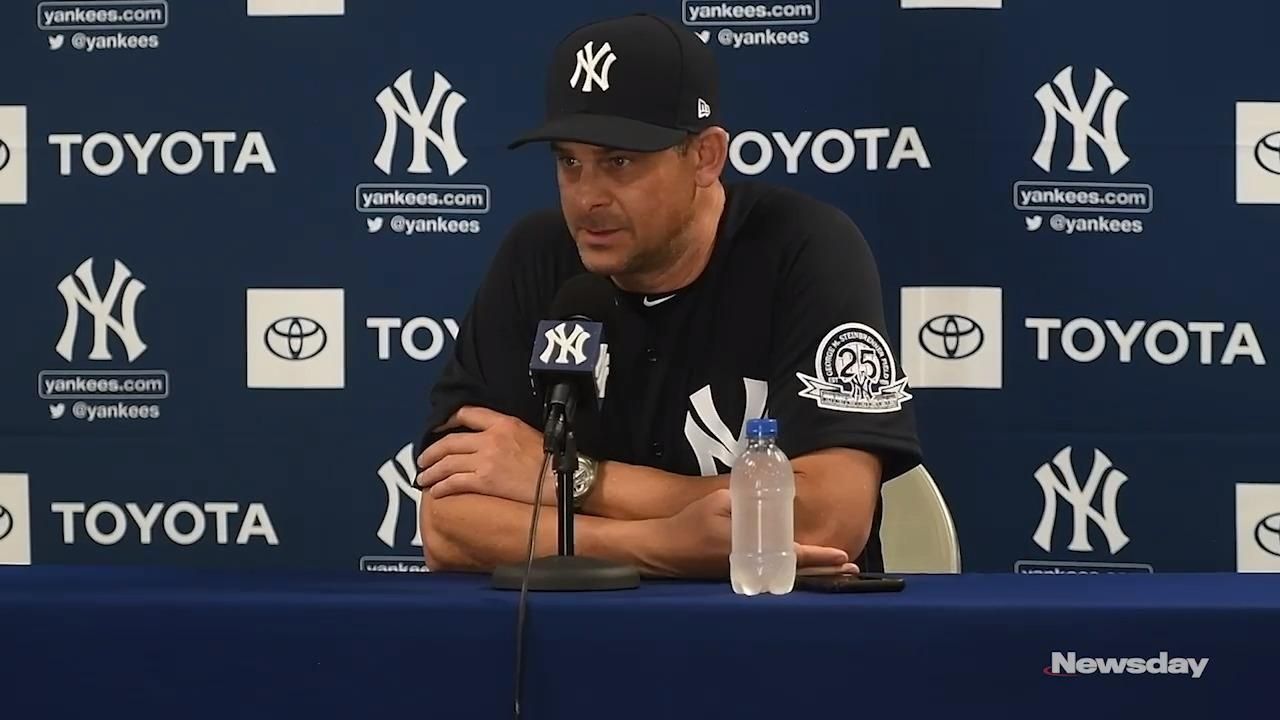 TAMPA, Fla. — Aaron Boone said Giancarlo Stanton enters spring training “fully healthy,” but that doesn’t mean it will be a full sprint out of the gate for the slugger.

Yankees position players, including Stanton, reported Monday and the club will have its first full-squad workout Tuesday.

“I probably go through his routine with him probably as much as I do with anyone,” Boone said. “As a matter of fact, I was just talking to him about it. He might not play the first couple games, but I would expect him probably that second home game [Feb. 24 against the Pirates].”

The Yankees’ caution is prudent. In his second season in pinstripes, Stanton was limited to 18 games in 2019 because of a variety of injuries.

He made it through spring training healthy and looked good, hitting .310 with four homers and a 1.063 OPS. He reached base three times in a season-opening 7-2 victory over the Orioles and played the next two games before landing on the injured list April 1 with a left biceps strain.

A bevy of setbacks and assorted other injuries followed, including another IL stint in late June because of a right knee sprain. It never fully healed the rest of the year, even as he returned in time to play nine games in September and five postseason games.

“Very, very important,” Boone said of getting Stanton through spring training healthy. “I said it a lot last year, I felt like he was in a great spot, in a great frame of mind in the little sample that we saw. I thought he was in position to have a tremendous season. And I expect that this year.”

The 30-year-old’s role — whether he’s primarily in leftfield or at DH — has not been determined.

“I think it’s a little bit fluid,” Boone said. “There will be a good portion of both, probably. I think it depends on the overall health of our team as a whole, how guys are performing, what matchups make the most sense. So I could envision him playing a good portion of outfield but I could also envision things unfolding in a way that makes it to where he’s getting more DH reps.”

Boone said Stanton is open to either role, however they’re divided.

“He’s comfortable enough now in leftfield to where we feel good about running him out there, but he’s also in a way taken to the DH role,” he said. “So I think it kind of depends on the guys around him and in our daily lineup and what the matchups are about how much we rotate him through the DH spot.”

With Aaron Hicks set to miss at least the first two months of the season — and possibly a bit more — as he recovers from Tommy John surgery, Brett Gardner will be the everyday centerfielder.

Mike Tauchman, whose surprising 2019 season was cut short because of a fluke left calf strain suffered in early September as he pursued a ball in the outfield at Fenway Park, is very much in the mix for leftfield duties.

“That’s not something I really control,” Tauchman said. “What I look at is I have kind of a good foundation from last year to build on.”

1:50
Yanks take step toward turnaround with victory in Cleveland
Mets fall behind early, rally, then tumble in 10th as Cubs sweep
Alonso wants to defend his HR Derby title this summer at Coors Field
Yanks' offense makes up for shoddy defense in win over Cleveland
Yankees' offense a bigger problem than Torres not hustling
Rangers' playoff chances take major hit with loss to Flyers
Didn’t find what you were looking for?