Yankees pitcher Masahiro Tanaka is tended to by team medical personnel after being hit by a ball off the bat of Yankees Giancarlo Stanton during a simulated game at Yankee Stadium on Saturday. Credit: AP / Adam Hunger

Besides the injured party, no one was more relieved than Giancarlo Stanton upon seeing Masahiro Tanaka show up at Yankee Stadium the next day.

Stanton’s 112-mph line drive drilled Tanaka on the right side of the head during a simulated game Saturday afternoon, sending the pitcher to the hospital with a concussion.

But Aaron Boone said that as of Saturday night, Tanaka no longer was feeling any symptoms, and that continued to be the case Sunday and Monday.

“That was a scary moment,” Stanton said Monday before serving as the DH in that night’s intrasquad game. “For me, terrible [feeling] initially, of course. You never want to see your teammate on the ground, especially by the hand of yourself. I’ve talked to him. He appears to be fine, given the circumstance, so my stance really is, as long as he’s OK, I’m OK. That’s a scary thing and something that I think . . . we really dodged something that could have been a lot worse.” 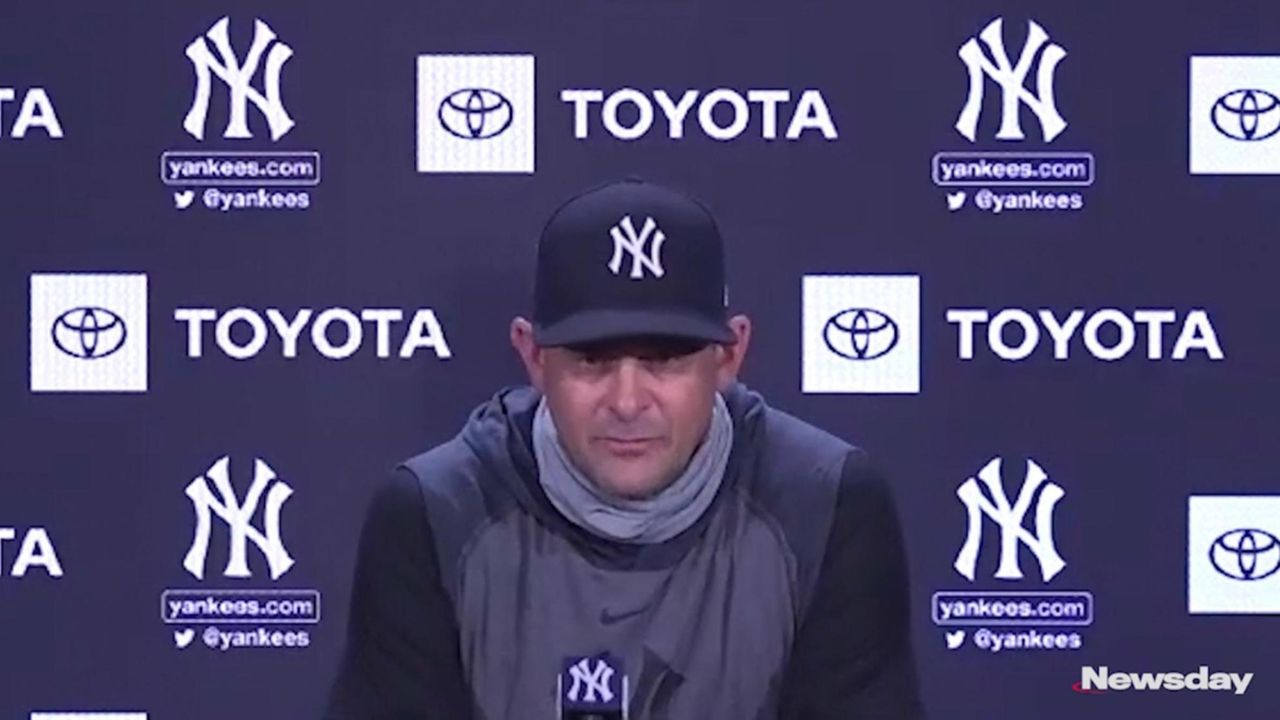 Yankees on adapting to new changes this season At a press conference on Monday, Yankees manager Aaron Boone spoke about the changes to the 2020 MLB season and adaptations made by the team during the coronavirus pandemic.    Credit: YES Network

Stanton, visibly shaken after seeing the ball hit Tanaka, knows how much worse.

While a member of the Marlins in 2014, Stanton suffered multiple facial fractures after being hit squarely by Mike Fiers’ fastball during an at-bat.

“You see it [in slow motion], you want that ball to keep veering off and it didn’t,” Stanton said of his first thoughts upon making contact with the ball that hit Tanaka. “Kind of like when I got hit. Everything was kind of in slo-mo; you look at how fast it happened later. But at the end of the day, I’m glad he was awake and functioning in response to [tests] right off the bat and throughout the evening and the next day and today.”

Though it seems as if Tanaka wasn’t seriously injured, given the uncertainty that goes with concussions, it doesn’t take much for things to go in the other direction. A most recent Yankees example of that was Clint Frazier. In February 2018, he suffered what the club initially called a “mild concussion” after running into an outfield wall during a spring training game against the Pirates in Bradenton, Florida. Frazier ended up dealing with concussion symptoms any time he upped his physical activity pretty much the rest of the year.

And so, while Boone said the Yankees are heartened by Tanaka’s progress two days after the fact, they’re taking nothing for granted.

“He did ride the bike today, 15 or 20 minutes I think on the bike, so that’s obviously another important step, as well as going through his baseline testing that he did really well on,” Boone said. “All signs continue to be encouraging with Masa. As he got his heart rate up today, there were no side-effects, no symptoms. So we continue to be encouraged but, like what we’re doing in this new world of COVID, we’ll take it day-by-day. But I would just say we’re very encouraged with where he’s at and how he’s responded.”

As for Stanton, he said the Grade 1 right calf strain he suffered Feb. 25 is now 100% and expects to start the season primarily at designated hitter. Stanton, who has not appeared to be limited in his activity during the first three days of camp, believes he eventually will play the outfield, but not at the outset.

“It’s been pretty recent of [feeling] 100%,” Stanton, limited to 18 games a year ago because of an assortment of injuries, said of the calf. “So we’re going to go through camp, make sure that the schedule lines [me] up to be ready to DH and go from there. With the season being so short, this is really a one-stop shop of getting it right. I think we have a good schedule down and a good formula to get it right.” 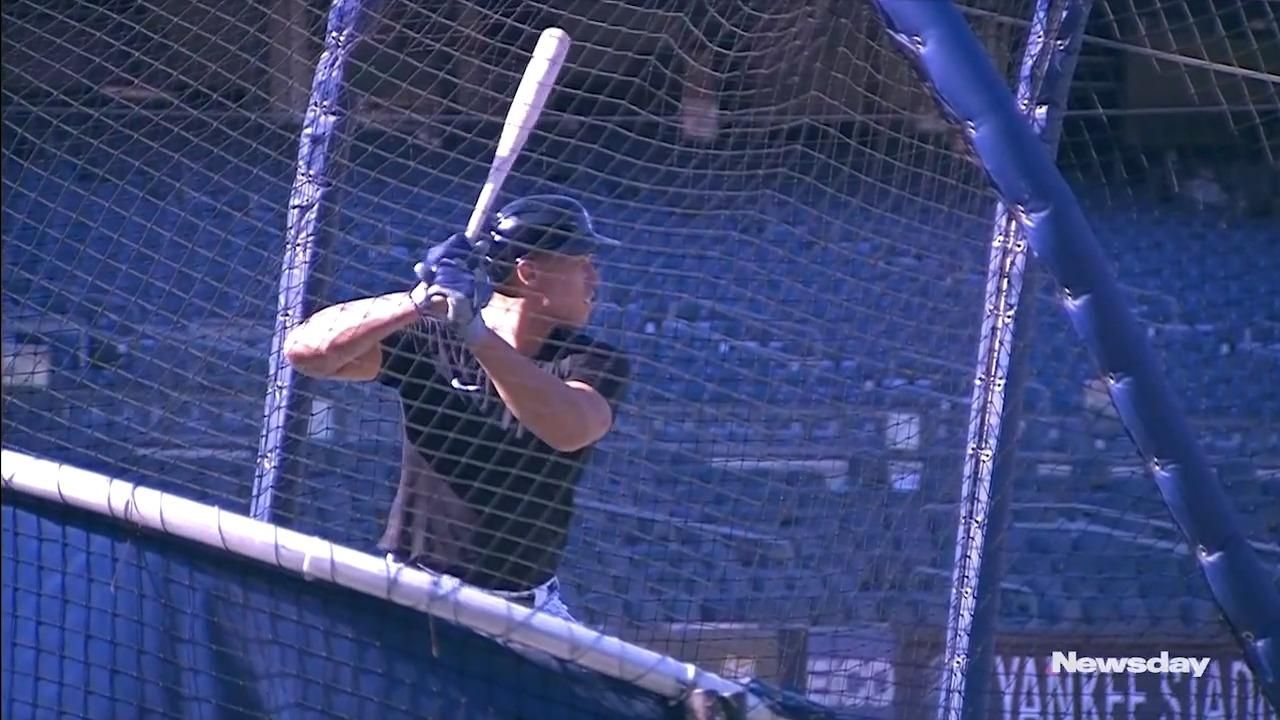 'Game-ready' Judge says he never thought of opting out of season Yankees outfielder Aaron Judge discusses his health status after a rib injury, his desire to play this season and more during his media availability on July 6, 2020, at Yankee Stadium Credit: YES Network

Aaron Judge, limited to mostly conditioning during spring training because of a rib fracture and collapsed lung, declared himself healed and “game-ready” after participating in Monday’s intrasquad game. “The biggest thing now is just getting the reps in,” he said.

Though a steady stream of players have opted out on playing this season, Judge said there was “never a doubt in my mind” about playing.

“There’s obviously a risk, of anything,” he said. “Just walking outside, there’s a risk; leaving your apartment, there’s a risk. There’s risk everywhere, but I love this game and I love the team that we’ve got here and the opportunity we have here.”

Judge said the importance of adhering to the extensive protocols — social distancing, no spitting, etc. — already has been discussed.