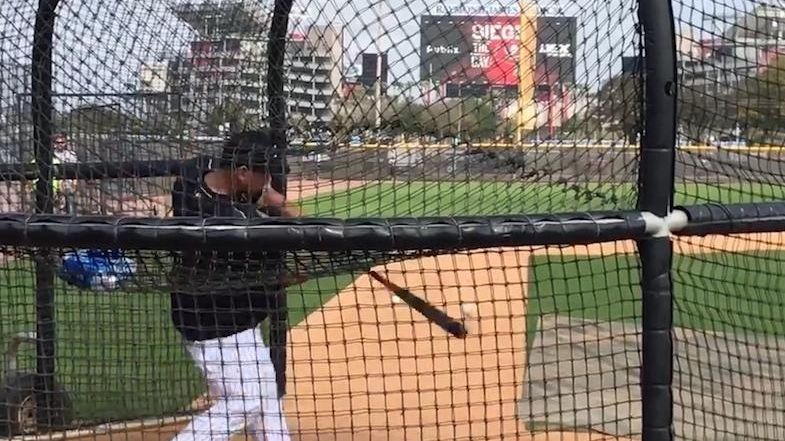 Yankees manager Joe Girardi in his first spring training news conference on Feb. 14, 2017, said he is excited to see what the club's homegrown talent can do on the field this season. Credit: Newsday / J. Conrad Williams Jr.; Eric Boland

TAMPA, Fla. — Joe Girardi has plenty of issues to think about going into the spring.

Figuring out his first baseman, rightfielder and last two rotation spots, to name a few.

His contract situation, the Yankees manager said Tuesday, is not one of them.

“It doesn’t really impact me,” said Girardi, entering the final year of a four-year, $16-million deal. “I’m going to go do my job the same way, in the way that I believe is the right way to do it. I won’t seek any clarity [from ownership]. They have not extended managers as long as I can remember during the course of the season, so I’ll just go do my job and whatever happens happens.”

Which rule would you change in baseball?

Girardi is set to begin his 10th season as Yankees manager and certainly pictures an 11th and beyond.

“Yeah, I don’t envision myself doing anything different and maybe that’s why I really don’t think much about it,” said Girardi, 819-639 in nine seasons with the Yankees. “This is what I know, this is what I’ve done for a long time and we’ll just play it out.”

A new contract would be the safe way to bet as Girardi is well-liked by ownership. Still, after winning the World Series in 2009, Girardi’s second year at the helm, there have been fewer and fewer playoff successes. The Yankees haven’t won a playoff series since 2012 and have missed the playoffs three of the last four years, with the lone postseason game in that time a wild-card loss to the Astros in 2015. (GM Brian Cashman is also entering the final year of his contract and is well-thought of by ownership as well.)

In the vast majority of those previous nine seasons, competing for a World Series title was a given as an organizational mandate.

Managing general partner Hal Steinbrenner gave the go-ahead last trade deadline for an all-out push toward youth not seen in the franchise in two decades and the expectations for the 2017 Yankees are modest.

Just don’t try to sell Girardi on it.

“Those [high] expectations don’t change,” said Girardi, speaking late Tuesday morning at his annual spring training kickoff news conference. “You look at the clubs that have won recently, a lot of young players with a few veterans mixed in, and I think when the Yankees made their long run [starting in the mid-90s], there were young players mixed in with veterans.”

Girardi was a veteran presence on those clubs when young players such as Derek Jeter, Mariano Rivera, Andy Pettitte and Jorge Posada started coming of age.

“I think the landscape has changed a little bit in the game and we’ve adjusted to that,” he said. “I think our young players are very talented. Talent’s one thing, production’s another and we believe that they’re going to be able to produce.”

There is more than enough to occupy Girardi’s thoughts. He has a competition at first base between Greg Bird and Tyler Austin — Bird is the clear favorite — to sort through, and a battle for the starting job in right between Aaron Judge and Aaron Hicks that the organization would like to see the former, called up late last season, win. There are bullpen slots to figure out, other than those that already belong to Tyler Clippard, Dellin Betances and Aroldis Chapman, and picking the fourth and fifth starters from among Luis Severino, Bryan Mitchell, Adam Warren, Luis Cessa and Chad Green.

And there’s the parlor game of guessing just what 24-year-old Gary Sanchez, who hit 20 homers after an early August call-up, can do over a full season.

“We haven’t been this young in a long time, probably since maybe 1996,” Girardi said. “But in that movement where there was a lot of young players, there was a lot of success and a lot of championships that followed. It was a great mixture of youth and veteran players . . . I think it’s going to be a very exciting year.”

Islanders fall to Lightning in a chippy Game 2
KD carries Nets to Game 5 win over Bucks with magical second half
Isles-Lightning Game 2 recap: Winning goal, key stat, more
Lennon: One win can't shake Yankees out of their funk
Barker: Kevin Durant silences critics with Game 5 masterpiece
Luis Severino's return to Yankees delayed at least a month
Didn’t find what you were looking for?