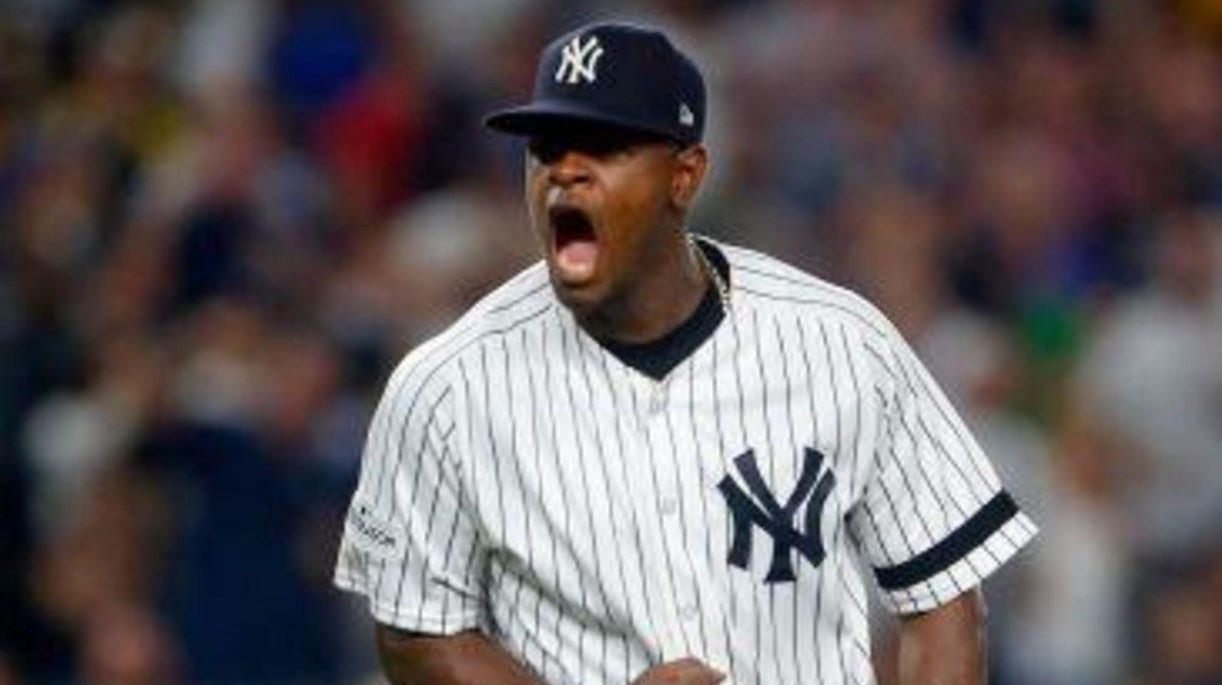 After climbing back into the American League Division Series with the slimmest of victories in Game 3 Sunday night, the Yankees, getting a nice bounce-back performance from Luis Severino, jumped to an early five-run lead and cruised past the heavily favored Indians, 7-3, in front of another boisterous Yankee Stadium crowd, on Monday, Oct. 9, 2017, to force a deciding Game 5. Credit: News 12 Long Island

The Yankees are one win away from making what looked like an impossibility late Friday night into a reality.

After climbing back into this American League Division Series with the slimmest of victories in Game 3 Sunday night, the Yankees got a nice bounce-back performance from Luis Severino. They jumped to an early five-run lead and cruised past the heavily favored Indians, 7-3, Monday night in front of another boisterous Stadium crowd to force a deciding Game 5.

Instead, the Yankees will head back to Cleveland.

CC Sabathia, who allowed four runs (two earned) in 5 2⁄3 innings in Game 2, will face Corey Kluber, the presumed AL Cy Young Award winner, Wednesday night. The Yankees pounded Kluber in Game 2, driving him from the game after 2 2⁄3 innings of the 9-8 loss in 13 innings that put them behind two games to none.

“These guys have picked me up,” said Joe Girardi, whose decision not to challenge a hit-by-pitch in the sixth inning of Game 2 contributed to the flushing of an 8-3 lead that night.

Girardi’s voice cracked while answering a question about the change in emotions over the previous 48 hours.

In large measure because his team, helpless against Trevor Bauer and his curveball over 6 2⁄3 shutout innings in Game 1, knocked out the righthander, pitching on three days’ rest, after 1 1⁄3 innings. Bauer allowed four hits and four unearned runs, but he wasn’t nearly as sharp, and the Yankees, whose first six runs were unearned, hit him hard.

“Against a team like Cleveland,” Aaron Judge said, “you have to capitalize on their mistakes.”

There were plenty in the form of four errors, the first of which opened the floodgates for a four-run second.

Todd Frazier opened the scoring with an RBI double, and Judge collected his first hit of the series later in the inning, a two-run double. Judge did strike out in his other four at-bats.

Severino, spotted that 5-0 lead, was far better than in his start against the Twins in the wild-card game last Tuesday, when he lasted one-third of an inning. He did allow a two-run homer to Carlos Santana in the fourth that made it 5-2 and a solo blast to Roberto Perez in the fifth. Severino, hearing noisy “Sev-er-ino!” chants from the crowd as he wrapped up the seventh inning, allowed three runs, four hits and one walk. He struck out nine.

Even though the Indians cut the Yankees’ lead to 5-3, the offense wasn’t going to let this one get away as Cleveland continued to make mistakes, looking nothing like the team that reeled off a 22-game winning streak late in the season.

The Yankees added their sixth unearned run in the fifth when Danny Salazar, the Indians’ third of seven relievers, threw away Frazier’s leadoff dribbler. Frazier would score on Gardner’s sacrifice fly to short right-center, barely beating centerfielder Jason Kipnis’ weak throw, to make it 6-3. Gary Sanchez hit his second homer of the series in the sixth and it was 7-3.

But Starlin Castro, who doubled and scored two runs, said it wasn’t just a matter of Cleveland playing poorly.

“Now we’ve shown them how good we are,” he said.

Dellin Betances walked the first two batters of the eighth, and Girardi, not taking any chances, brought on Tommy Kahnle to face Kipnis. Kahnle struck him out looking, retired Jose Ramirez on a flyout, dropping him to 2-for-17 in the series, and struck out Jay Bruce swinging to end the threat. Kahnle struck out the side in the ninth.

“I think our fans really helped set the tone,” said Gardner, who went 2-for-4. “It was big to get an early lead for Sevy. From there I think the momentum just kind of rolled all game.”

Momentum the club very much believed, even down 0-2, could be grabbed here, and now can roll into Cleveland.

“We know that we can play with anybody, and we were right,” Chase Headley said. “We felt good about coming home. We took care of business here and give ourselves a chance to go back and win one game.”