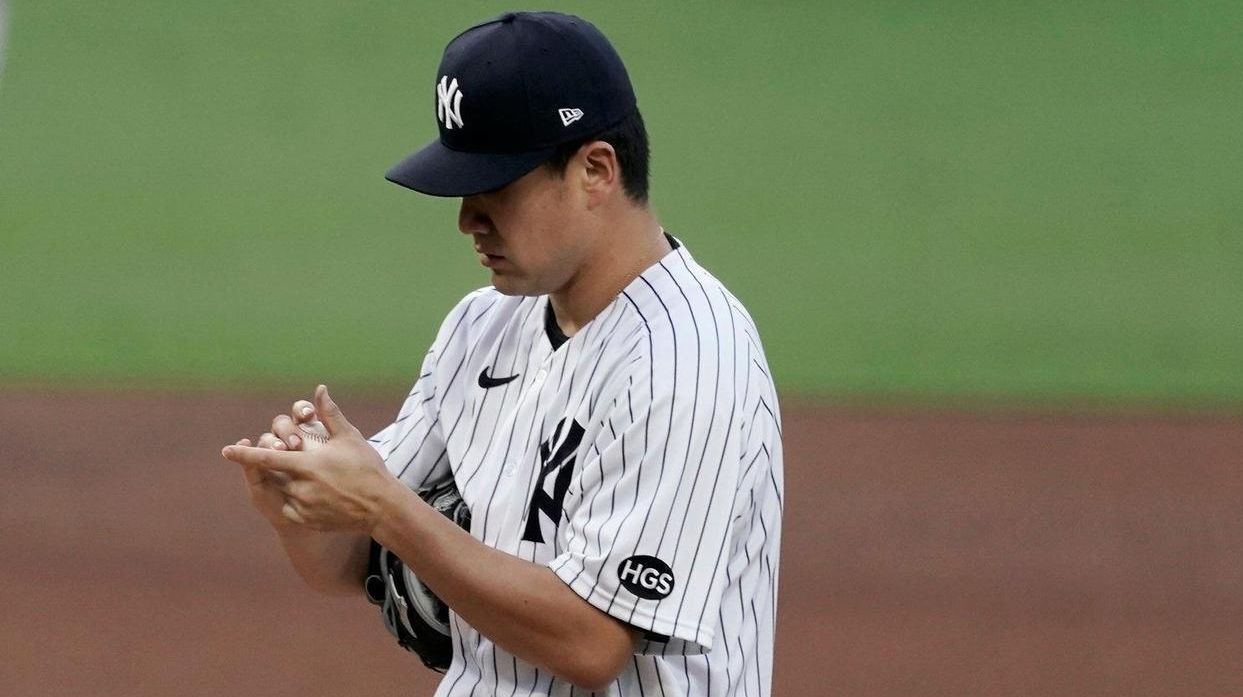 Newsday's Yankees beat writer Erik Boland discussed the Yankees' 8-4 loss to the Rays in Game 3 of the ALDS on Wednesday, Oct. 7, 2020, at Petco Park in San Diego. Credit: Newsday

If Wednesday night’s Game 3 of the ALDS was Masahiro Tanaka’s final start as a Yankee, he went out with a bang.

Randy Arozarena’s leadoff home run in the fifth on Tanaka’s final pitch of the night – and perhaps his final pitch in a Yankees uniform as Tanaka will be a free agent after the season.

Tanaka’s bad start pushed the Yankees one loss away from their offseason beginning. They are trailing 2-1 in the best-of-five series with Game 4 at Petco Park in San Diego on Thursday night.

Tanaka has built up a record as a clutch postseason performer in his seven seasons as a Yankee. That reputation took a hit as Tanaka allowed five runs in four-plus innings.

Combined with Tanaka’s bad outing (four innings, six runs) in what ended up being a Yankees victory in Game 2 of the wild-card series in Cleveland, his postseason ERA went from 1.76 in eight starts entering this postseason to its current 3.33.

"They took advantage of a couple mistakes," manager Aaron Boone said. "He made some big pitches tonight, but one big mistake – the three-run homer to Kiermaier in the fourth there – and then Arozarena. I always expect when Masa takes the ball that he’s going to go out and pitch really well and give us an opportunity to win. They dinged him with a couple big swings today."

Tanaka, through his translator, said: "There’s only frustration there. I thought my stuff was better compared to my last outing and I thought that I was well-prepared going into this game. That makes it even more frustrating. Just very frustrated that I wasn’t able to get the results tonight."

Tanaka’s night started off excellently when he struck out the first two batters. After the red-hot Arozarena reached on an infield single, Ji-Man Choi struck a drive to right that Aaron Judge ran down before bracing himself and running hard into the fence. Judge’s clutch catch in a tough late-afternoon sun saved a run.

In the second, the Rays were able to string three singles together in a four-batter span to take a 1-0 lead. The run-producing hit was a two-out line single by No. 9 batter Michael Perez that just ticked off the glove of a leaping DJ LeMahieu, who was stationed in short rightfield on the shift.

Judge’s sacrifice fly in the third tied the game at 1. But the Yankees left the bases loaded against Charlie Morton.

The game turned in the fourth. Joey Wendle singled and took off for second on a 3-and-2 pitch to Willy Adames. The pitch was close enough to the strike zone that Kyle Higashioka threw to second and LeMahieu slapped the tag on Wendle for what could have been a strike-‘em-out, throw-‘em-out double play.

But plate umpire Mark Carlson called the pitch low and a ball, giving the Rays two runners on for Kiermaier.

"It looked real close to me," Boone said. "I haven’t gone and looked at it yet. Obviously, a big pitch there. And then the homer by Kiermaier really hurt, obviously."

Tanaka’s next pitch was a slider that Kiermaier crushed into the rightfield seats for a 4-1 Tampa Bay lead.

Arozarena’s third home run of the series made it 5-1 and ended Tanaka’s night. And perhaps more.

ALDS Game 3: Yankees vs. Rays photosSee the scenes as the Yankees face the Rays in Game 3 of their American League Division Series matchup on Wednesday in San Diego. Tanaka hit hard as Rays put Yankees on brink Tanaka was pulled after allowing a leadoff homer to red-hot Randy Arozarena in the fifth inning; Giancarlo Stanton hit his sixth homer in five postseason games.

Mills, Aldridge 'looking forward' to return to San Antonio
Isles have a plan for their new, packed schedule
Giants' GM decision could be as early as Friday
Kyrie Irving fined $25G for on-court incident with fans
Rangers vs. Toronto Maple Leafs highlights
Edwards making most of opportunity with Nets
Didn’t find what you were looking for?