There was the prospect of the Yankees rebounding from bitter losses in the first two games of this four-game set against the Red Sox to earn a series split and show general manager Brian Cashman they are, to use a word he often employs at this time of year, "worthy" of being fortified before the trade deadline.

And there was an additional not-so-small sidebar: Domingo German finding himself six outs away from throwing the Yankees’ second no-hitter of the season (to go with Corey Kluber’s on May 19 against the Rangers).

None of it happened. Instead, the Yankees took yet another of the "gut punches" that Aaron Boone calls the brutal losses that have steadily stockpiled since April.

Sunday afternoon’s wasn’t the worst of the lot. Ranking them at this point serves no purpose. It was simply the most recent.

The Red Sox, hitless through seven innings, picked up all five of their hits and scored five runs in the eighth to send the Yankees to a 5-4 loss in front of a noisy Fenway Park crowd of 32,009.

It was every bit as stunning as the Yankees’ 4-3 win the day before, when they scored four two-out runs in the eighth.

"It’s like you find yourself on top of the world and all of a sudden you’re free-falling, and you fall fast," German said through his interpreter of what it was like watching Sunday’s disastrous eighth unfold from the dugout. "It’s so hard to even process what happened."

After German struck out four Red Sox batters in the seventh (courtesy of Gary Sanchez’s passed ball on the second strikeout) and Sanchez tripled and scored on Gleyber Torres’ single to give the Yankees a 4-0 lead in the eighth, Alex Verdugo ended the no-hit bid with a leadoff double over rightfielder Greg Allen’s head in the bottom of the inning. 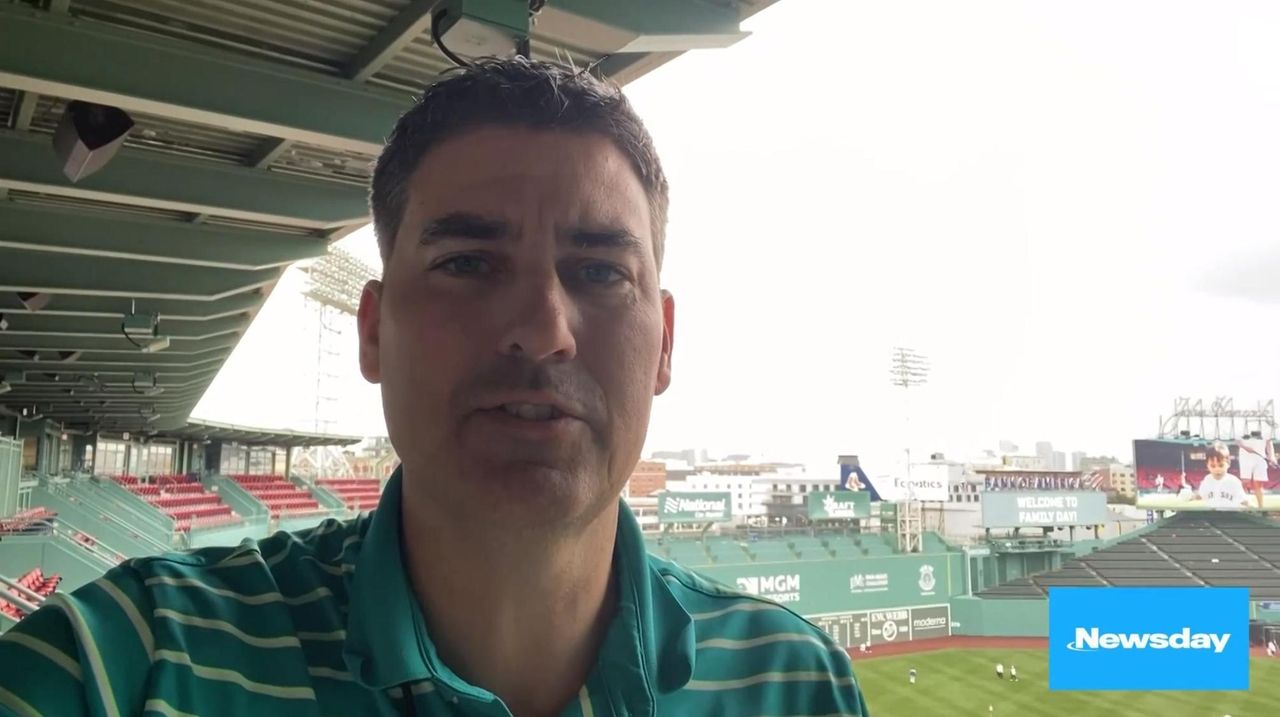 Yanks left to process another crushing defeat following loss to Red Sox Newsday's Erik Boland discusses the Yankees' loss to the Red Sox on Sunday at Fenway Park, the latest in a series of brutal losses suffered by the Yanks this season.  Credit: Newsday / Erik Boland

"Been going through my mind a lot," Allen said of having a chance to catch Verdugo’s drive. "It was a tough one. It was a ball hit fairly well. Unfortunately, wasn’t able to get back on it in time."

That was the 93rd and final pitch for German, his most since reaching a season-high 99 on May 27. He had not thrown more than 90 in a game since then and already had flown well past the 80 pitches Boone said he was comfortable with on Sunday.

Still, German said: "No fatigue at all. I felt really good."

Jonathan Loaisiga, mostly terrific this season, came on and had nothing, throwing 10 pitches to four batters and giving up four hits. Hunter Renfroe’s RBI double, Christian Vazquez’s RBI single, Franchy Cordero’s single and Kike Hernandez’s RBI double made it 4-3 and put runners on second and third with none out.

"I wasn’t able to locate my slider for strikes, and my sinker wasn’t moving as it has been moving," Loaisiga said through his interpreter. "I wasn’t as sharp today."

Zack Britton replaced him, and with the corner infielders in and the middle infielders back, pinch hitter Kevin Plawecki’s groundout to short brought in the tying run. Boone later second-guessed himself for not having the entire infield in for Plawecki. Xander Bogaerts’ sacrifice fly to right then gave the Red Sox a 5-4 lead as Hernandez beat Allen’s throw home.

In the ninth, Matt Barnes allowed a two-out single by Giancarlo Stanton — who struck out with the bases loaded and one out in the seventh — and pinch runner Tyler Wade stole second (he might have been out if Bogaerts hadn’t dropped the ball after diving for a wide throw and making the tag in one motion). Rougned Odor, who homered in the sixth to make it 3-0, got ahead 2-and-0 but popped to third to end it.

German ended up being charged with one run and one hit in seven innings-plus. He walked one and tied a career high with 10 strikeouts.

"To pitch a no-hitter, it’s one of the hardest things to do in baseball," he said. "I knew I had a no-hitter going. I was executing pitches, trying to be as careful as possible while navigating their lineup, but the reality is they have such a good lineup. At any given moment, they can hit the ball very well and the no-hitter is over."