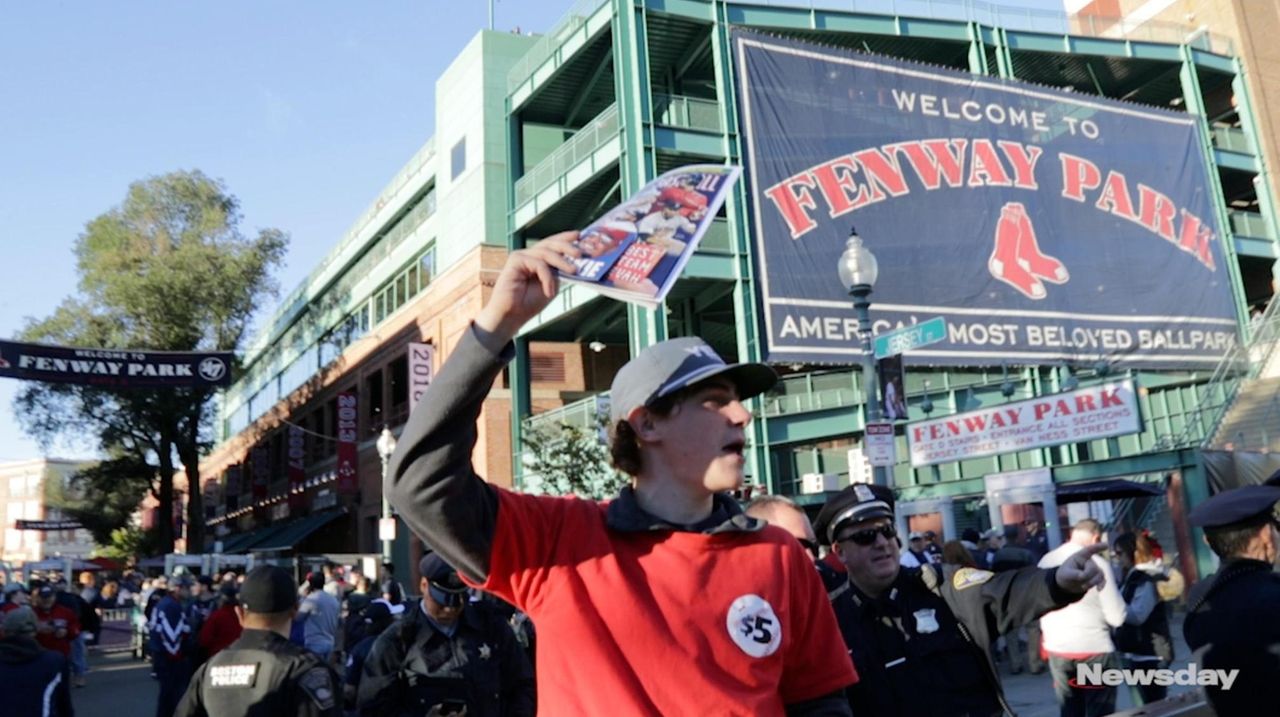 Yankees and Red Sox fans alike gathered together outside Fenway Park in Boston before Game 1 of the ALDS on Friday, October 5, 2018.  Credit: Newsday / Bill Perlman

BOSTON – When Aaron Boone needed critical outs from his bullpen during Wednesday night’s AL Wild-Card game, the first pitcher he tabbed from his deep corps of relievers was a pitcher who was a postseason non-factor a year ago.

Or, as Dellin Betances put it: “Obviously, last year I was more of a cheerleader.”

Betances’ rough finish to the 2017 regular season – the righthander posted a 5.68 ERA in his last 16 games – cost him the confidence of then-manager Joe Girardi.

He appeared in five postseason games, but in only one of them did he throw in what would be considered a high-leverage situation -- and that was when he was basically the last man standing in the Yankees’ 9-8, 13-inning loss to the Indians in ALDS Game 2. Yan Gomes won it in the 13th with an RBI single off Betances.

Betances had a 5.79 ERA in 14 appearances through May 6 this season before turning into his usual lockdown self. He posted a 1.88 ERA in his final 52 appearances, striking out 88 in 52 2/3 innings.

And so, when Luis Severino allowed the first two batters in the fifth inning to reach base on Wednesday night with the Yankees holding a 2-0 lead over the A’s, Boone brought on Betances. He got consecutive flyouts from Matt Chapman and Jed Lowrie, then struck out the dangerous Khris Davis to end the threat.

Betances, who mostly struggled this season when called on for a second inning, didn’t on Wednesday, striking out two A’s in a perfect sixth.

Betances called his performance “probably one of the biggest highlights of my career,” especially given how last October went.

“It meant a lot to me,” he said. “I was cheerleading a lot of the guys last season. And this year I got a chance to come in early in the game, and I was just fortunate enough to go in a good situation and get the job done. But I’ve been waiting for that time for a long time now.”

For Boone, going to Betances when he did was a no-brainer. In the manager’s mind, his early-season issues were not a concern and his resumption as one of the best bullpen options in the sport was predictable.

“I talked a lot early in the season, even when he had a couple of hiccups, I felt like he was in a really good place mentally and just with his delivery and how he was throwing the ball,” Boone said. “And that manifested itself during the season. It’s huge for us, because he’s so talented. You know, he’s capable, when he’s on top of his game, of dominating really good hitters.”

And Boone knew exactly what Wednesday meant after what Betances experienced when the games mattered most in 2017.

“Obviously him, with what he went through last year, to go out and kind of be the first man out of the pen in a huge situation and come in and just be on point and dominate is hopefully something that will be a little springboard for him into this postseason,’ Boone said. “I know I’m proud of the effort that he gave, but I’m not surprised, either, because I feel like he’s been in a really good place really all season long for us.”

Trotz won't comment on Rangers' management moves
No Carrasco for the Mets until the end of May at the earliest
Walker and walks the keys to Mets earning split with Cards
Best: Hovering presence of Sather adds to Rangers intrigue
NHL fines Rangers $250,000 for critical statement
Torres beats Astros' shift, scores from first on infield hit
Didn’t find what you were looking for?