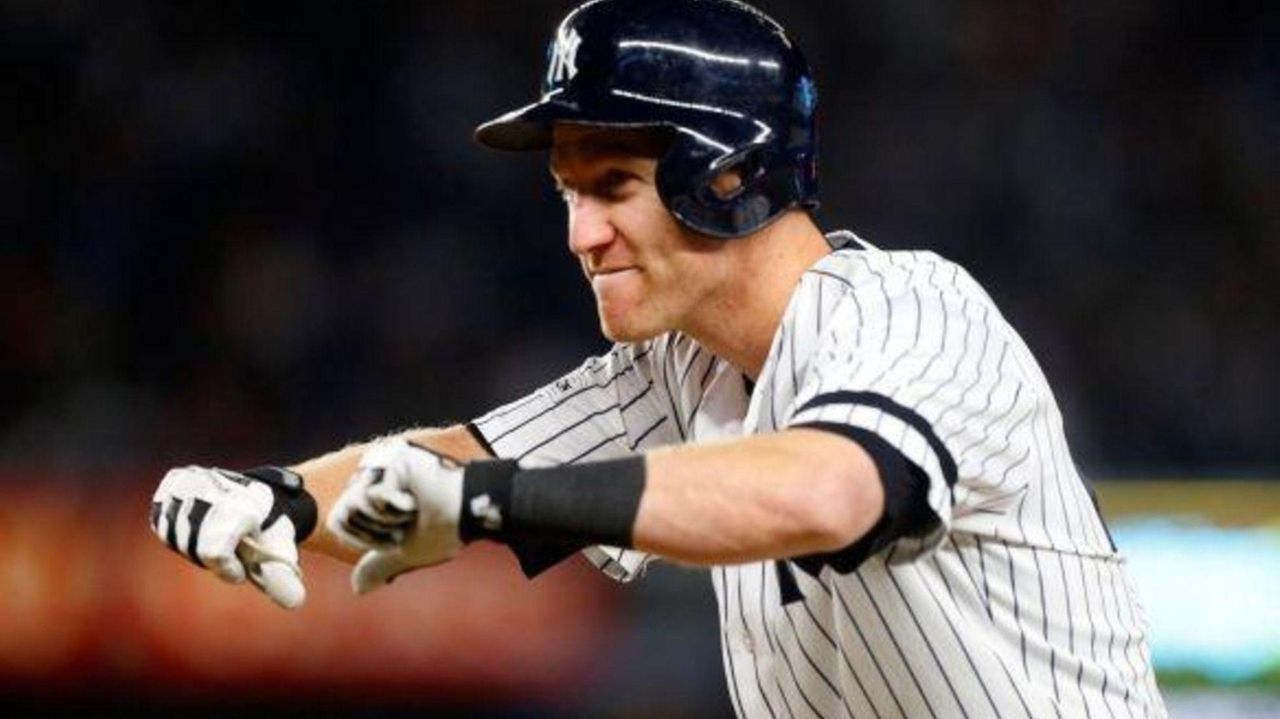 On Wednesday, Oct. 18, 2017, Yankees manager Joe Girardi talked about what they need to do in order to beat Astros ALCS Game 5 starter Dallas Keuchel. Credit: MLB

Todd Frazier hopes the Yankees give him a thumbs up on returning next season. Or, in the world Frazier has created to the delight of his teammates and fans, a thumbs down.

“This has been such a fun ride,’’ Frazier, a potential free agent, said Tuesday after the Yankees evened the American League Championship Series with the Astros at two games apiece. Frazier had two hits in the 6-4 comeback victory. “I’m so ingrained in this place. I would love to [return] 100 percent.’’

What Frazier has brought to the team has broken the mold of the old-time staid Yankees. He’s the Yankee Funster, and his “thumbs down” has swept through the clubhouse, through the stands at Yankee Stadium and to his website, where he sells thumbs down shirts.

It all started Sept. 11 at Citi Field, where the Yankees were playing the Rays while Tampa recovered from Hurricane Irma. When Frazier hit a three-run homer, Mets fan Gary Dunaier, 54, of Fresh Meadows, Queens, a court office assistant at the Manhattan criminal court, took great exception and flashed a pronounced thumbs down that was caught by the YES cameras.

Frazier saw the thumbs down gesture and it became a rally cry that appears every time the Yankees do something positive.

“We act like 12-year-olds,’’ Frazier said. “I’m doing it everywhere. Little kids, old men. Other people are looking at me and saying, ‘Why are you giving that guys a thumbs down?’ It’s pretty cool.’’

Frazier’s teammates quickly bought into the thumbs down routine.

“It’s fun,’’ Didi Gregorius said. “Guys get on base, you know, it’s something for us to rally around. It seems to work.’’

Dunaier, now known as the “Thumbs Down Guy,” was seated in the second row behind the Yankees’ dugout that night at Citi Field last month. He said he wasn’t aware that his gesture was televised.

“Not at all,’’ he said Wednesday. “It came as a complete surprise. I found out late during the game. Some people told me they had seen me on TV.

Frazier has said he’d like to meet Dunaier. Perhaps at the World Series? “I haven’t received any overtures from the Yankees,’’ Dunaier said.

Frazier’s return in 2018 is uncertain. The Yankees will groom Gleyber Torres for third base, perhaps for next season. And Chase Headley, who lost his job at third when Frazier was obtained from the White Sox, is signed through the 2018 season.

Frazier is making $12 million this season, and though the Yankees have salary coming off the books, they want to get under Major League Baseball’s luxury tax threshold of $189 million.

Frazier doesn’t want his time with the Yankees to end. Asked if he would stick around as a cheerleader, he said, “There you go, a mascot.’’ Frazier’s Twitter feed @FlavaFraz21 is packed with yellow thumbs-down emojis.

Dunaier has become recognizable. “People give me the thumbs down gesture,’’ he said. “They ask for selfies, they ask me to do the gesture, the stone face and thumbs down. I do it.’’

Dunaier also has some hopes of marketing opportunities. “I do have people who are working on my behalf,” he said. “I do have some irons in the fire.’’

On Wednesday, the National Bobblehead Hall of Fame and Museum in Milwaukee, Wisconsin, unveiled a rendering of a Thumbs Down bobblehead featuring Dunaier’s likeness and thumbs down gesture. Phil Sklar, co-founder and CEO of the museum, said in an email that Dunaier “is receiving an agreed- upon percentage of the sales. It was one of the ‘coals in the fire’ that he was alluding to. We contacted him late last week and put everything in motion pretty quickly.’’

The bobblehead will sell for $25 plus $8 shipping. Preorder is at bobbleheadstore.com. Shipping is expected to begin in February.