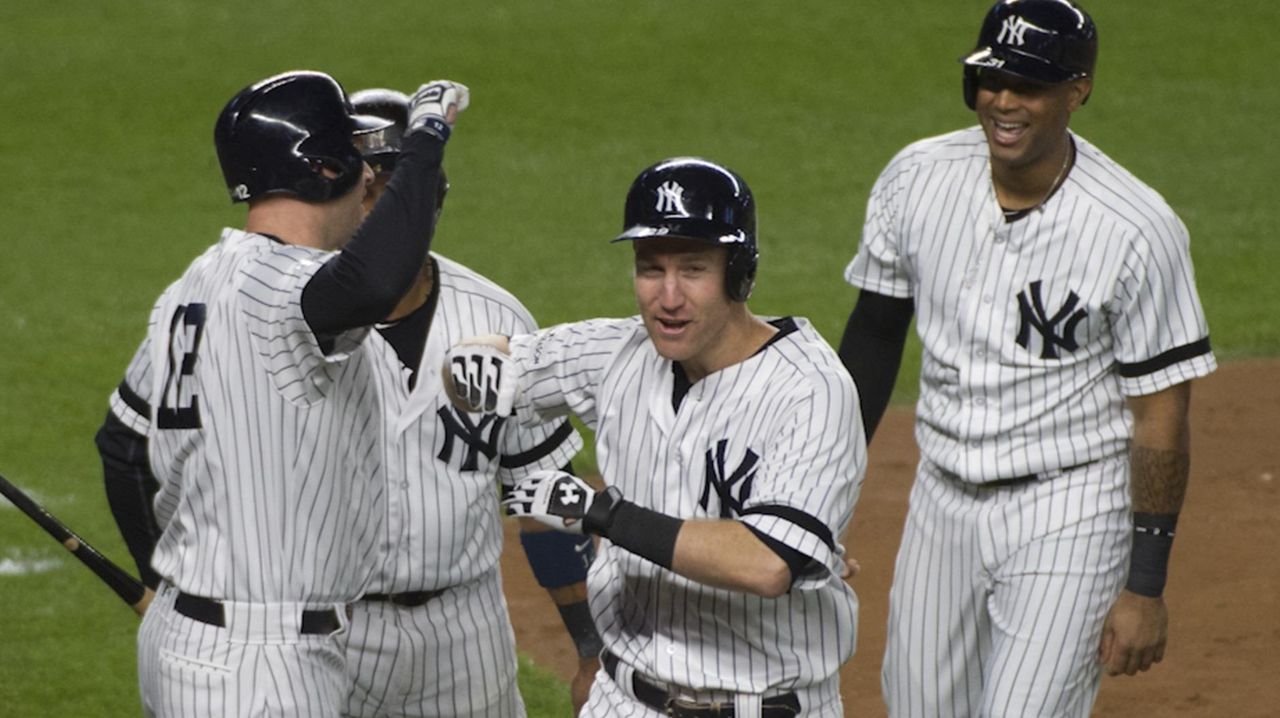 While Yankees fans were waiting for Aaron Judge and Gary Sanchez to break out — and for someone, anyone, to get a hit from the designated hitter position — it almost went unnoticed that Todd Frazier was batting just .185 in the postseason going into Monday night’s Game 3 of the American League Championship Series against the Astros.

Frazier broke out in a big way with a three-run home run in the second inning that started the Yankees’ barrage in their 8-1 victory at Yankee Stadium.

The game was scoreless with two outs in the second when Starlin Castro reached on a dribbler up the third-base line and Aaron Hicks blooped a single to left-centerfield to bring up Frazier against Charlie Morton.

Frazier, who drove in the Yankees’ run with a double in their 2-1 loss in Game 2 on Saturday, lined a low and outside 1-and-1 pitch from Morton over the wall in right for a 3-0 Yankees lead.

After the ball disappeared into the jubilant crowd, Frazier punched the air and pointed to rightfield as he rounded first base. As he approached second, he looked at his left wrist.

“Pretty much every home run, I’ve done that with my hand,” Frazier said. “I put my arm out and say, ‘What time is it?’ Just a little thing I do. I’ve been doing it forever. I guess TV just finally caught on to it . . . And I pointed to a couple of family members. They were scattered, but most of them were in the outfield.

“I got yelled at today. It was a big controversy — they weren’t in the family section. So now they’re going to have to sit there for the rest of the series after what happened today.

“He brings an excitement to play the game every day,” Joe Girardi said before the game. “He’s always cheering for his teammates in a way that you really feel that this guy believes in you and helps you get it done. He’s a leader in the clubhouse, I think. He’s got a ton of fight in him. And when you put those things together with his talent, I think it makes him a special player and a special guy, and a guy you want to be around. And a guy that you want to watch.”

Girardi and Frazier each is in the final year of his contract. It’s more likely that Girardi will be back than Frazier because the Yankees already are committed to paying Chase Headley $13 million to play third base next season. But if Frazier hits a few more home runs like the one that sparked the Yankees on Monday, you never know.

Oh, and the Yankees finally got their first hit from a DH in the postseason when Chase Headley drove in a run with an infield single in the fourth to make it 4-0. Headley, Jacoby Ellsbury and Matt Holliday had been a combined 0-for-28 with 11 strikeouts.