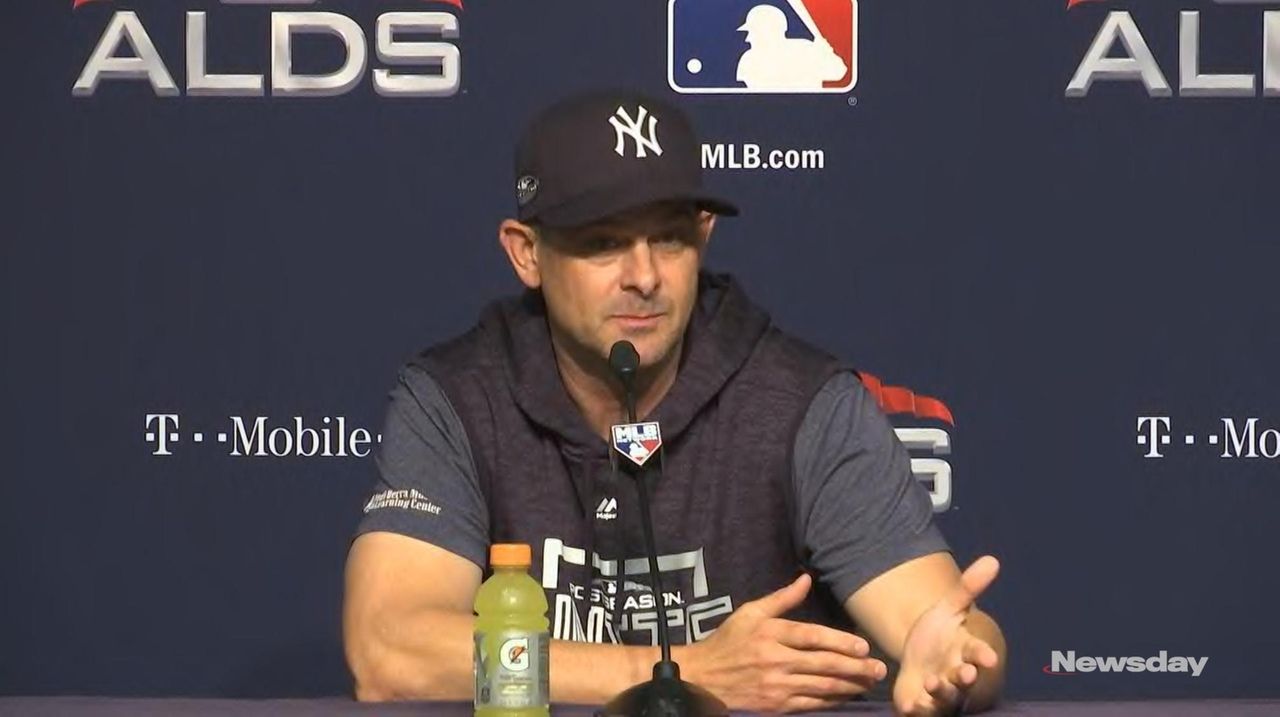 Before Tuesday night's game, Yankees manager Aaron Boone explained his thinking about two pitching moves that backfired in his team's 16-1 loss to the Red Sox on Monday night in Game 3 of the ALDS. Credit: News 12 Long Island

Aaron Boone admitted publicly Tuesday what the vast majority of coaches and managers don’t. Yes, he second-guessed himself for some of the decisions that went awry in Monday’s 16-1 loss to the Red Sox in Game 3 of the American League Division Series that put the Yankees on the brink of elimination in Tuesday night’s Game 4.

And it ate at him.

“Last night stung, it was hard, it was a [expletive] drive home,” Boone said in his office in a meeting with beat reporters before Game 4. “But you also understand that’s part of it and you have to get up and today’s too damn important to dwell on it.”

More than a few spent time dwelling on it after Monday’s game and throughout the day Tuesday.

At issue were a pair of decisions made – or not made – by Boone with the game still within reach: not pulling struggling Luis Severino sooner, and choosing Lance Lynn as his first reliever.

The Yankees trailed 3-0 when Boston came to bat in the fourth. Though the Red Sox had produced hard-hit balls, sometimes more than one, in each of the first three innings, the Yankees’ bullpen stayed quiet as the fourth started. (Lynn had been up briefly in the two-run third).

Brock Holt, who would become the first player to hit for the cycle in postseason history, and Christian Vazquez opened the seven-run fourth with singles. Severino walked the No. 9 hitter, Jackie Bradley Jr., on four pitches to load the bases, which finally brought Boone to the mound, accompanied by a hailstorm of boos. In came Lynn to face Mookie Betts, an AL MVP candidate who struck two balls hard against Severino in his first two at-bats. Lynn walked Betts, a righthanded hitter, on four pitches to force in Holt to make it 4-0.

“We feel like Lance, in a lot of ways, against righties gives us our best chance,” Boone said after the game. “He just didn’t really have it tonight.”

Although that comment raised eyebrows – especially with strikeout righthanders Dellin Betances, Chad Green and David Robertson available – Lynn was good against righties this season. They hit .239 against him and slugged just .358. And Lynn was terrific in relief in the Game 1 loss, allowing one hit and striking out two in two scoreless innings. One of the hitters Lynn faced that night was Betts, whom he struck out.

“The Lynn [decision] for the top of the order I’m fine with, it didn’t work out,” Boone said. “He had some struggles, obviously, especially right out of the gate command-wise. Certainly in hindsight when he doesn’t get an out [he did record one but allowed three runs], yeah, you’d like to have that back. But really I felt like Sevy, I felt like we were going to make the move once we got to the top of the order, but felt like he had a chance to navigate the bottom of the order there. So that’s what my decision to stick with him there was. And obviously that didn’t work out.

“So being able to look back in hindsight, sure, you’d go a different way there in that spot.”

Boone said he didn’t see or hear any of the criticism lobbed his way Tuesday, but was aware of it.

“I know it’s out there because of the texts I’ve received, the ‘hang in theres’ and whatnot,” he said with a smile.

In the end, however, Boone repeated what he’s said since he was named manager last December.

“You know what you signed up for,” he said, smiling again. “And it’s very easy … we can all sit and first-guess and second-guess that I would do this. And that’s one of the great things about our game, frankly. Especially when you’re passionate about the game and passionate about your team, there’s always other ways to do things that potentially are equally or even more effective.

“That’s one of the reasons I think this game has survived and thrived for hundreds of years now. Because it is gray and there’s always strategies and things to talk about. That’s part of it.”

Boone gives second guessers more reasons to wonderIf everything is magnified in the playoffs, it counts doubly so during an elimination game. ... You be the GM: What should Yankees do in offseason? If you were given the reins of the Yankees, what moves would you make this offseason?