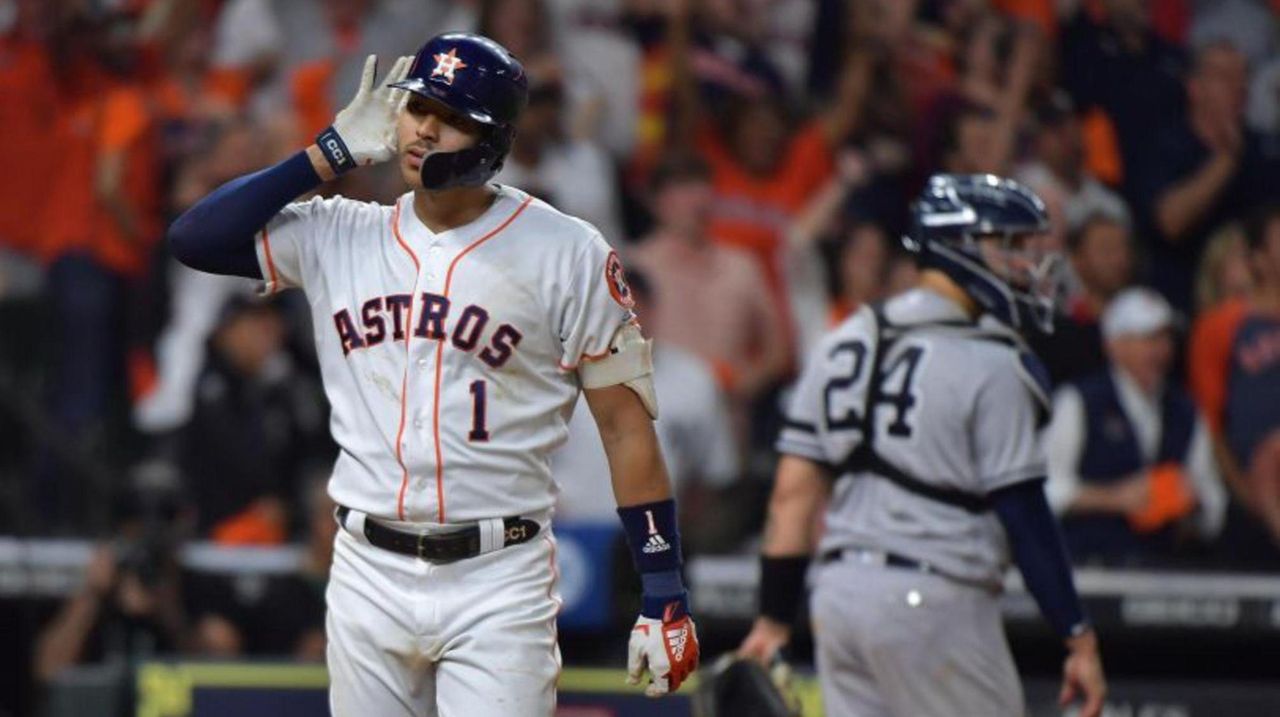 Carlos Correa’s walk-off homer to rightfield on J.A. Happ’s first pitch of the 11th inning gave the Astros a 3-2 victory over the Yankees in Game 2 of the American League Championship Series in front of 43,359 at Minute Maid Park on Sunday night. Newsday Yankees beat writer Erik Boland talked about the Game 2 loss. Credit: Newsday / William Perlman

HOUSTON — This one will sting.

Just how much is to be determined.

Carlos Correa’s walk-off homer to rightfield on J.A. Happ’s first pitch of the 11th inning gave the Astros a 3-2 victory over the Yankees in Game 2 of the American League Championship Series in front of 43,359 at Minute Maid Park on Sunday night.

The Astros tied the series at 1-1 in a game that lasted 4:49 and ended two minutes before midnight CT.

“Better than 0-2,” Happ said in the near-silence of the Yankees’ clubhouse afterward. “Not as good as 2-0.”

Which it easily could have been.

Midway through the game, the Yankees — who stole home-field advantage from the Astros with their 7-0 victory in Game 1 on Saturday night — found themselves with a lead against Justin Verlander and a fully rested bullpen prepared to preserve it.

The Yankees had an opportunity to go home with a two-games-to-none lead and a very real chance to close out the top-seeded Astros at a sure-to-be- earsplitting Stadium.

But Adam Ottavino, who replaced a dominant Chad Green, hung a first-pitch slider to George Springer that allowed the Astros to tie it in the fifth, and that’s the way it stayed until the 11th.

“Just trying to get ahead,’’ Ottavino said. “I have a lot of confidence in my slider, but credit to him. He didn’t miss it when I made a mistake.”

Entering the 11th, the Yankees’ bullpen had allowed one run, two hits and four walks in 7 2/3 innings, striking out 11.

“You're playing it to what gives us the best chance to win here,” said Aaron Boone, every bit as aggressive with his bullpen as he promised he'd be at the start of the postseason. “And the bottom line is we end up giving up a third run in the 11th inning. I'd say from a run prevention standpoint it went pretty well.”

The Yankees successfully drove up Verlander’s pitch count to 109 in 6 2/3 innings  but failed to capitalize against a suspect Houston bullpen, which allowed no runs, one hit and two walks in 4 1/3 innings, striking out five.

“It’s tough,” said Aaron Judge, whose towering two-run homer to center off Verlander in the fourth traveled an estimated 423 feet and gave the Yankees a 2-1 lead. “We had a lot of chances that game. We had them on the ropes basically all game and just weren’t able to seal the deal. But we’re confident going back home.”

CC Sabathia started the 10th and retired Michael Brantley before Jonathan Loaisiga walked Jose Altuve and Alex Bregman. He was replaced by Happ, who struck out dangerous Yordan Alvarez and got Yuli Gurriel to fly to left.

But an inning later, Correa drove Happ’s first-pitch fastball over the rightfield wall to end it.

Correa, whose walk-off hit off Aroldis Chapman won Game 2 of the 2017 ALCS here, also doubled home the first run of the game and made a heads-up defensive play to cut down the potential go-ahead run at the plate in the sixth.

“These are two of the best teams in Major League Baseball,” Astros manager AJ Hinch said. “I don't see a lack of offense; I see two incredible teams going at it with strengths on both sides… This was an epic game in the playoffs with everything on the line. So obviously this has only just begun.”

James Paxton started for the Yankees, and it quickly became apparent that the lefthander didn’t have it. He was pulled after allowing one run, four hits and two walks in 2 1/3 innings and was replaced by Green, who pitched two scoreless, hitless innings.

The Astros gave Verlander a lead in the second. AL MVP candidate Alex Bregman led off by lining a 0-and-1 fastball off the top of the leftfield wall, Paxton walked Alvarez on five pitches and Gurriel’s long flyout to right put Bregman on third. Correa then yanked a curveball down the leftfield line for an RBI double to make it 1-0, but Paxton struck out Robinson Chirinos and Jake Marisnick on curveballs to end the 21-pitch inning.

In the third, Paxton struck out Springer swinging at a cutter but allowed back-to-back singles by Brantley and Altuve.  Boone brought in Green, who retired Bregman on a liner to left and got Alvarez to pop to short.

After Springer homered off Ottavino, the Yankees nearly regained the lead in the sixth. LeMahieu led off with a single and Gleyber Torres singled with one out. With two outs, Brett Gardner hit a ground smash that banged off Altuve at second and trickled away. Third-base coach Phil Nevin waved LeMahieu around, but an alert Correa picked up the ball about 10 to 15 feet away from Altuve and delivered a strike to catcher Chirinos, who tagged out LeMahieu.

“I didn’t see it, I was running, had my back turned towards it,” LeMahieu said. “I kind of peeked to see where the ball was and I saw Correa had it already. Like everyone was saying, I think it's the right call [by Nevin] and a heck of a play.”

On a night full of them by both teams.

“Disappointed tonight didn't go our way,” Gardner said. “We felt good about how we played yesterday, we played a pretty clean game today. We just weren't able to come through with that big hit when we needed it. Hopefully Tuesday will be a different story. Looking forward to getting back to the Bronx.”