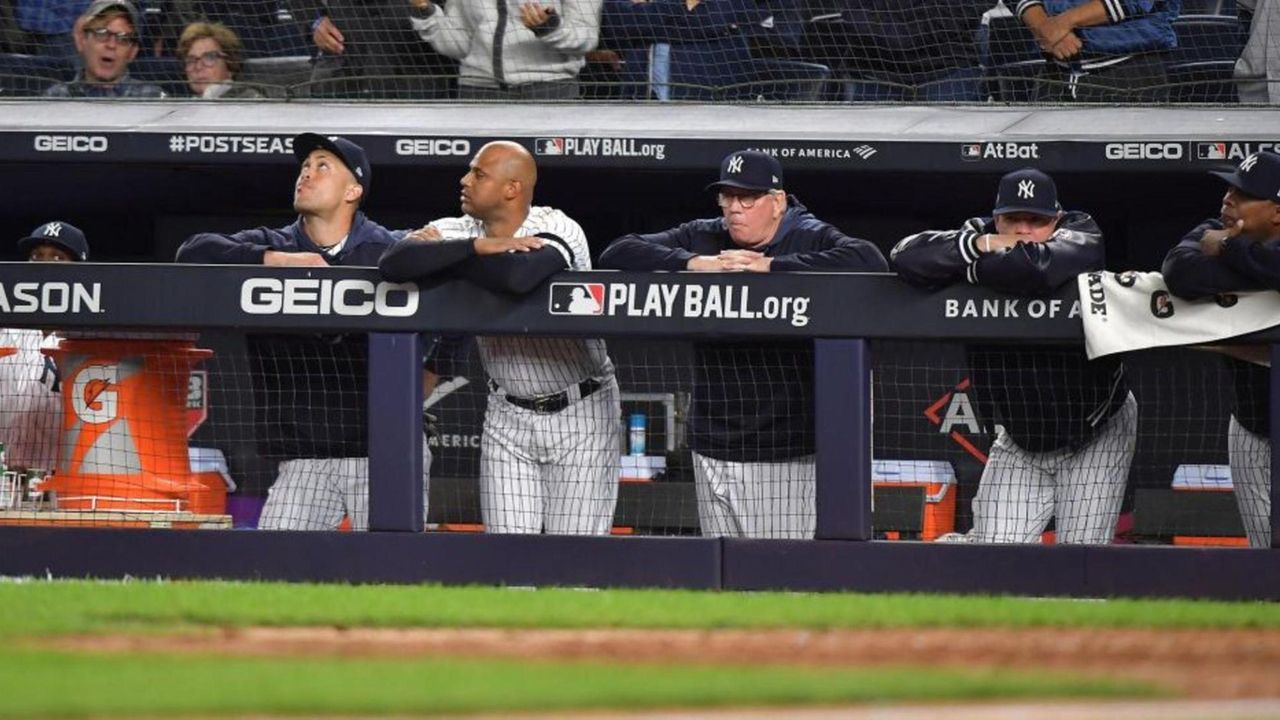 The Yankees' offense was quiet against Houston starter Gerrit Cole in a 4-1 loss to the Astros in Game 3 of the ALCS. Erik Boland, Newsday's Yankees beat writer, recaps all the action. Credit: Newsday / Robert Cassidy/Greg Inserillo

The Yankees didn’t see the Gerrit Cole from the last 2 ½ months of the regular season or the one coming off a historic performance in the American League Division Series.

Which in many ways made Game 3 of the ALCS Tuesday afternoon that much more frustrating for them.

Cole was there for the taking and the Yankees couldn’t take a thing, putting runners on throughout against the righthander but still were shut out over seven innings of a 4-1 loss in front of a sellout crowd of 48,998 at the Stadium.

“It just takes that one swing to get us rolling and kind of break through, but we just weren’t able to get that big hit,” said Aaron Judge, who singled in the first but struck out in two of his next three at-bats. “I had a situation in the [second] where I had two guys on and I wasn’t able to come through. It’s the postseason. You have to come through in those situations.”

The Yankees did not, finishing 0-for-6 with runners in scoring position and stranding nine over Cole’s seven innings. As a result, the Astros took a two-games-to-one lead in the best-of-seven series that is slated to continue Wednesday night, though a lousy forecast threatens to postpone the game until Thursday.

“We did a good job of getting some guys on base, making him throw a good bit of pitches,” Brett Gardner said of Cole, who was at 89 pitches through five and ended up throwing 112. “He was on the ropes a couple of times and he was able to get out of it. That’s what the best pitchers do.”

The Yankees made him work but never pushed anything across against him and didn’t score at all until Gleyber Torres’ homer in the eighth off Joe Smith made it 4-1.

The Yankees left the bases loaded in the first when Didi Gregorius bounced to second and the shortstop experienced even more disappointment in the fifth when, with two on, he flied to the base of the wall in right on a ball many in the crowd and both dugouts thought was out.

“Cole did his thing out there, he didn’t make too many mistakes, especially to me,” Judge said. “I don’t think I got one pitch over the heart of the plate. So when that happens you kind of get frustrated, you kind of a chase a little bit.”

Luis Severino, who threw four scoreless innings in the clinching Game 3 of the ALDS vs. the Twins, was not sharp, laboring through a 36-pitch first. He allowed two runs and five hits, including solo homers to Jose Altuve and Josh Reddick. The righthander did well to keep the damage there but on this day against Cole, it was enough damage.

“Two bad pitches,” said Severino, who did retire eight of the next nine after Reddick’s leadoff homer in the second made it 2-0. “Two sliders right down the middle. You can’t throw pitches down the middle.”

It stayed 2-0 until the seventh, when a struggling Adam Ottavino was charged with two runs, sparking the inning with a walk to leadoff man George Springer. He was booed off the mound after Altuve’s hit-and-run single to right put runners at the corners. In came Zack Britton, who threw a wild pitch that got past Gary Sanchez to let in one run and Yuli Gurriel’s sacrifice fly tacked on another to make it 4-0. Sanchez, whom Aaron Boone said afterward he is not considering replacing with backup Austin Romine, went 0-for-4, falling to 2-for-21 with 10 strikeouts in October.

The catcher’s night was emblematic for the most part of the Yankees’.

“Up and down we gave ourselves a chance, and anytime you’re facing a guy like that [Cole], you want that kind of traffic and we had that in several innings,” Boone said. “I think we ended up with probably about nine baserunners against him. You kind of sign up for that. We weren’t able to break through.”