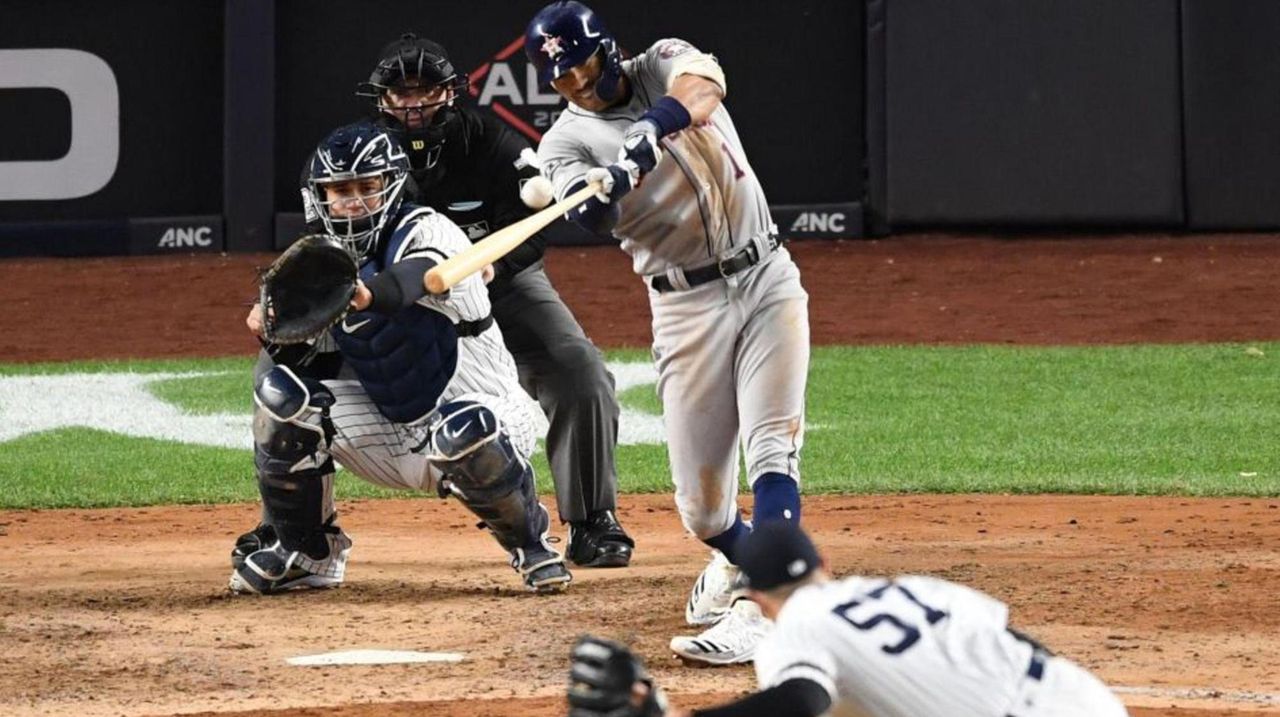 Erik Boland, Newsday's Yankees beat writer, talks about the 8-3 loss on Thursday in Game 4 as the Yankees fall into a 3-1 deficit against the Astros in the ALCS.  Credit: Newsday / Yeong-Ung Yang

What a brutally bad loss.

With their postseason stud on the mound Thursday night opposing a pitcher who was hit hard in Game 1, the Yankees’ chances of evening the ALCS at two games apiece looked good.

But Masahiro Tanaka didn’t have the same stuff he did in Game 1 and the Yankees’ bats stayed as chilled as the weather that moved in overnight.

As a result, the Yankees’ 103-win season is one loss from being over after an atrocious 8-3 loss to the Astros in Game 4 in front of 49,067 at the Stadium, most of whom left disgusted at their sloppy performance.

The Yankees committed four errors and continued to fail with runners in scoring position. “We played poorly tonight. There’s no other way to explain it,” said Aaron Boone, who addressed his team in the clubhouse after the game. “And we need to flush this immediately because . . . we talked about it as a team; we need to get over this in a hurry and come put our best foot forward tomorrow.”

Even if the Yankees were to win Friday, they’d still have to win two games at Minute Maid Park, with Gerrit Cole looming in one of those matchups, to advance to the World Series for the first time since 2009. “Stranger things have certainly happened, a lot stranger, and we need to play a cleaner game, obviously, if we’re going to beat a team like that,” Boone said. “But we did not get it done tonight.”

Tanaka, 5-2 with a 1.32 ERA in seven career postseason starts entering the game, allowed four runs (three earned), four hits and two walks in five innings-plus. The righthander, who struck out seven in Game 1, struck out only one Thursday.

He allowed a three-run homer by George Springer in the third that made it 3-1 and Chad Green surrendered a three-run shot by Carlos Correa in the sixth that made it 6-1. DJ LeMahieu and Gleyber Torres each made two errors, contributing to three unearned runs.

But the bigger story by far was the cold Yankees bats. They went 0-for-7 with runners in scoring position and left 10 on base, with Gary Sanchez, Torres and Edwin Encarnacion striking out in bases-loaded situations.

In the last three games, the Yankees are 16-for-103 with 32 strikeouts, are 1-for-16 with runners in scoring position and have left 26 on base. They have scored six runs in that span, five of them on three homers.

In the regular season, they were among the best in baseball with RISP, hitting .294 with an .890 OPS. “I have to step up, everybody’s got to step up,” said Judge, who twice struck out with a runner at second in the game.

Sanchez, who has drawn the ire of Yankees fans all postseason, struck out on three pitches — the third of which was in the dirt — to end a bases-loaded threat in the first inning against an erratic Zack Greinke, who had just walked Brett Gardner with the bases loaded. Sanchez did hit a two-run homer in the sixth to make it 6-3.

The Astros tacked on an unearned run in a hideous eighth inning as LeMahieu and Torres each committed an error.

That inning also featured what apparently were the last pitches thrown by CC Sabathia in his major-league career. He pitched to four batters and retired two of them before leaving with what Boone called a left shoulder injury. Sabathia departed to a long and loud ovation as he walked to the dugout with his team trailing 7-3.

“We’ve got our backs against the wall now and we’ve had it there in many ways from the adverse situations we faced all year,” Boone said. “And I know these guys will come focused and ready to go tomorrow, and I can’t wait to see them go out there and play our game.”

A far better one, Boone hopes, than the one they played Thursday.

Lennon: One team showed up, and it wasn't the Yankees  This was an epic fail by the Yankees, an across-the-board meltdown in a seemingly must-win game. Aside from the pinstripes, this group was unrecognizable. A tough moment for Yankees as Sabathia exits in painLeft shoulder injury forces him to leave in eighth inning in what apparently will be his final appearance. Yankees make four errors in ugly Game 4Gleyber Torres and DJ LeMahieu each made two errors as a crushing defeat turned into an ugly one. Fans (and items) getting out of hand at StadiumAstros manager A.J. Hinch says he will pull his team off the field if balls and bottles are thrown by fans.