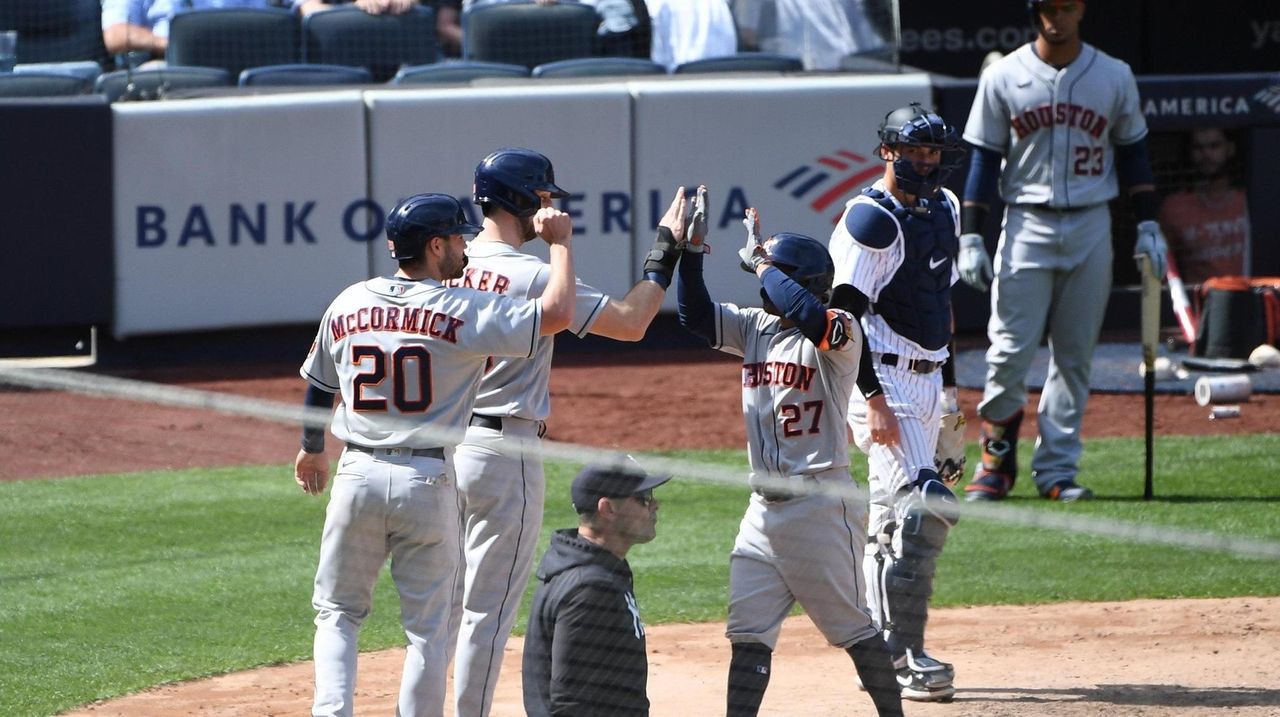 Newsday's Erik Boland breaks down the Yankees' loss to the Houston Astros and the crowd's reaction to a go-ahead homer from Jose Altuve on Thursday, May 6, 2021 at Yankee Stadium. Credit: Newsday / Erik Boland

Jose Altuve, for one day anyway, got the best of Yankees’ fans who in general made his life miserable the last three days.

Booed, heckled and chanted at in mostly expletive-laden terms seemingly since the Stadium gates opened at 5:30 p.m. Tuesday before the first game of this series, Altuve exacted a measure of revenge Thursday afternoon with a three-run homer with one out in the eighth inning off Chad Green, paving the way for a 7-4 Astros victory in front of a disappointed crowd of 10,042.

"It’s a go-ahead homer," Green said of allowing it to Altuve, clearly enemy No. 1 among Yankees fans when it comes to the Astros' sign-stealing scandal. "It stings just as bad if it’s the leadoff hitter or the nine-hole."

The loss snapped a five-game winning streak for the Yankees (16-15), who were unable to complete a three-game sweep of the Astros (16-15).

With Gerrit Cole turning in another standout start – not as dominant as some of his others this season but still good enough – and Giancarlo Stanton and Clint Frazier homering, Green came on for the eighth charged with protecting a 3-2 lead (Frazier’s two-run homer in the fourth snapped a 1-1 tie; Stanton’s homer in the third off Lance McCullers, his third in as many days and team-best ninth, extended his hitting streak to 12 and made it 1-0).

Green, bringing a 1.02 ERA in 14 games into the game, walked Kyle Tucker to start the inning. Pinch hitter Aledmys Diaz hit one to third where Gio Urshela made a nice diving stop but his throw came in low to Mike Ford, who did a poor job coming off the bag for it. The ball skittered away, putting runners on the corners with none out. After striking out Martin Maldonado, Altuve, celebrating his 31st birthday Thursday, stepped in. The second baseman, 2-for-11 to that point of the series and serenaded by a boisterous "Cheater! Cheater!" chant, turned on a full-count fastball, which came in at 96-mph, and yanked it to left-center, his third homer making it 5-3. It was the third homer allowed by Green this season, but the reliever repeatedly kicked himself afterward for the walk.

"A leadoff walk in that situation comes back to bite you and then stuff can happen and it did happen," Green said. "That inning should never even get to Altuve and it did."

Gleyber Torres’ mad dash around the bases in the bottom half, when he scored from first on an infield single, cut the Yankees’ deficit to 5-4 but Martin Maldonado’s two-out, two-run homer in the ninth off Justin Wilson extended the Houston lead to 7-4. That made it the rarest of days so far this season in which the Yankees’ bullpen didn’t get the job done, a group that came into the day with the lowest bullpen ERA (2.24), opponents’ batting average (.179) and WHIP (0.94) in the big leagues.

Gerrit Cole, of course, had been getting the job done all season. He came in 4-1 with a 1.43 ERA – with 62 strikeouts in 37 2/3 innings, the most strikeouts over the first six starts by any Yankees pitcher in franchise history – that performance earning him AL Pitcher of the Month honors.

He did not have that kind of swing-and-miss stuff Thursday, but nonetheless had his team in position to win late, allowing two runs and five hits over seven innings, his ERA ticking up to 1.61. Two of the hits were homers hit by Yordan Alvarez.

The designated hitter’s second blast, in the seventh, cut the Astros’ deficit to 3-2, setting up the craziness that would follow.

Cole struck out four, which ended at 15 his streak of striking out at least seven batters, tied with Pedro Martinez and Nolan Ryan for the second-longest such stretch by a starter in AL history, six shy of Shane Bieber's current streak.

"It was tough," Cole said of facing a team he pitched for from 2018-19. "They put together a lot of good at-bats. I felt like I played chess out there for a couple of hours. Always enjoyable to go up against some of the best competition. It was a good fight."

Rieber: Yankees-Astros could be preview of October spotlightThere were about 1,000 fewer fans in the stands on Wednesday night for the second ...