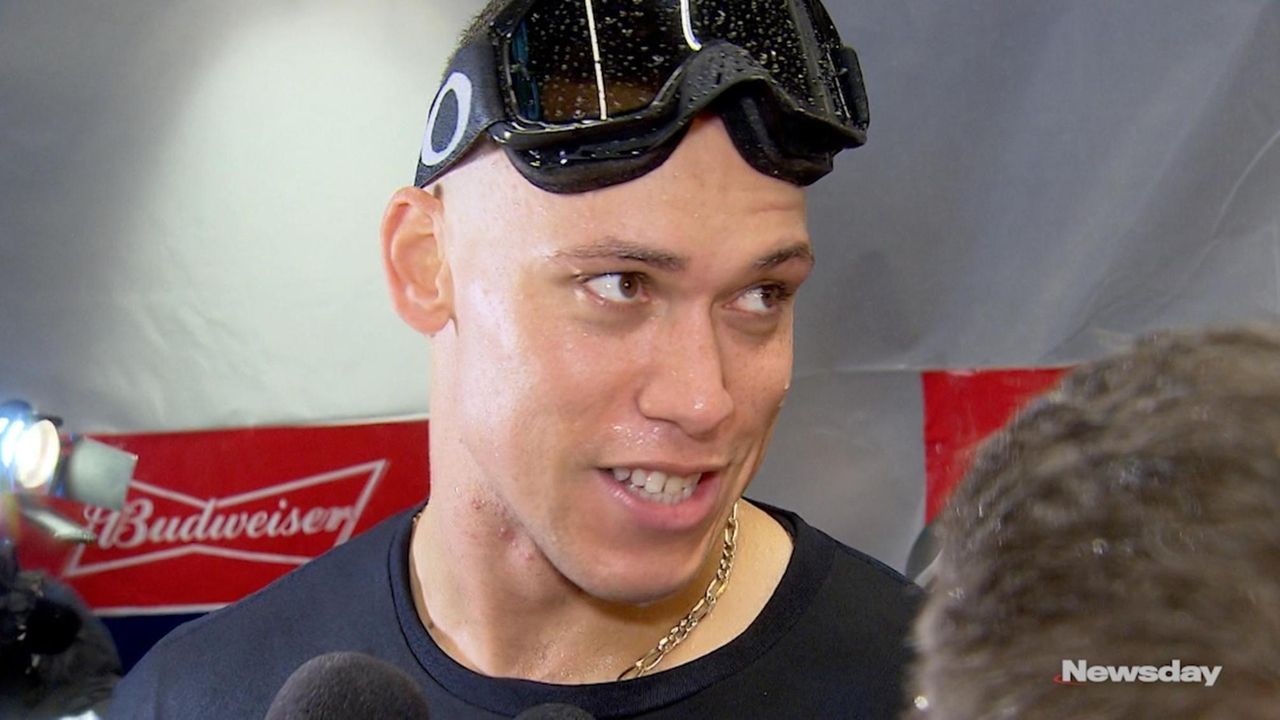 For openers, the Yankees were more than ready.

With Luis Severino rewarding his manager’s faith and Aaron Judge wrecking Oakland’s bullpen strategy nine pitches into the game, the Yankees toppled the A’s, 7-2, Wednesday night in the American League Wild Card game in front of a noisy crowd at the Stadium that rivaled any that filled the building during last year’s playoff run.

The Yankees' second straight Wild Card win earned them a trip to Division Series, where they’ll take on the Red Sox in a best-of-five. Game 1 is Friday night at Fenway Park.

The Yankees, who also received a titanic home run by Giancarlo Stanton late to make it 7-2, lost the season series to the Red Sox, 10-9, but won four of the last six meetings.

After the Yankees put it away with a four-run sixth, highlighted by late-season phenomenon Luke Voit’s two-run triple off the wall in right, “We want Boston!” chants reverberated throughout the Stadium from the sellout crowd of 49,620.

The sixth broke open what had been a 2-0 game, a lead provided when Judge took righthander Liam Hendriks, the A’s “opener,” deep to left-center in the first.

Judge doubled and scored, on Aaron Hicks’ double, to start the scoring in the sixth to make it 3-0.

Severino, Aaron Boone’s mildly surprising choice to start the game over J.A. Happ and Masahiro Tanaka, provided a lift as well. With a wipeout slider reminiscent of his All-Star first half, the 24-year-old allowed two hits and struck out seven over four innings. Severino, who lasted one-third of an inning in last year’s wild-card victory over the Twins, walked four.

“Sevy set the tone and really came out on a mission,” Boone said.

He departed with two on and none out in the fifth but Dellin Betances, a non-factor in last year’s postseason run to Game 7 of the ALCS as his ineffectiveness lost him the confidence of then-manager Joe Girardi, took it from there. He escaped that jam, then struck out two in a perfect sixth inning. David Robertson pitched a scoreless seventh and Zach Britton allowed a two-run homer to Khris Davis in the eighth that made it 6-2. Aroldis Chapman struck out two in the ninth.

“I’ve been waiting for this moment for a long time,” Betances said of his contribution. “Last year I was a cheerleader. Thank God this year I was able to be a part of something special.”

With the sellout crowd not yet in their seats, Severino struck out leadoff man Nick Martini on three pitches, the last a called strike on a 98-mph fastball. Matt Chapman bounced to third and Jed Lowrie struck out swinging at a 98-mph fastball to end the 10-pitch inning.

The Yankees quickly went to work on Hendriks, with leadoff man Andrew McCutchen working a five-pitch walk. Hendriks fell behind Judge 2-and-1, then delivered a get-me-over, 96-mph fastball that Judge rocketed to the bleachers in left-center. Judge hit a two-run homer in last year’s 8-4 wild-card victory over the Twins.

Severino, who didn’t allow a hit until Jonathan Lucroy’s leadoff single in the fifth, faced his first real trouble in the fourth as the A’s loaded the bases with two outs. Oakland was aided by a throwing error by Miguel Andujar that Voit couldn’t scoop from the dirt. But Severino struck out Marcus Semien swinging at a 99-mph fastball, punctuating the moment with an emphatic fist pump and scream into the night.

Severino came out for the fifth and allowed the leadoff single to Lucroy, Oakland’s first hit. He got ahead of Martini 0-and-2 but saw him pound a fastball to right for a single. In came Betances, who had at least one strikeout in 63 of 66 appearances this season, to face Chapman. He flied to Judge for the first out and Lowrie flied to center for the second. Betances struck out Davis to end the threat, giving the A’s a small army of seven stranded, and inching the Yankees closer to a showdown at Fenway.

“We wanted Boston, that’s who’s next, right?” Betances said. “We were trying to win this game to get them. Obviously they’re a tremendous team, we’ve battled them all year. I think everybody in baseball wants this matchup, and so do we.”

Source: Rangers to name Gerard Gallant head coach
Will deGrom, Walker and Stroman handle increased workload?
Lennon: Francisco Lindor feeling cheery at Citi Field
Analysis: Are the Yankees what their record says they are?
Mets considering playing red-hot McKinney in centerfield
Durant will be only one of Nets' Big 3 to play in Game 5
Didn’t find what you were looking for?