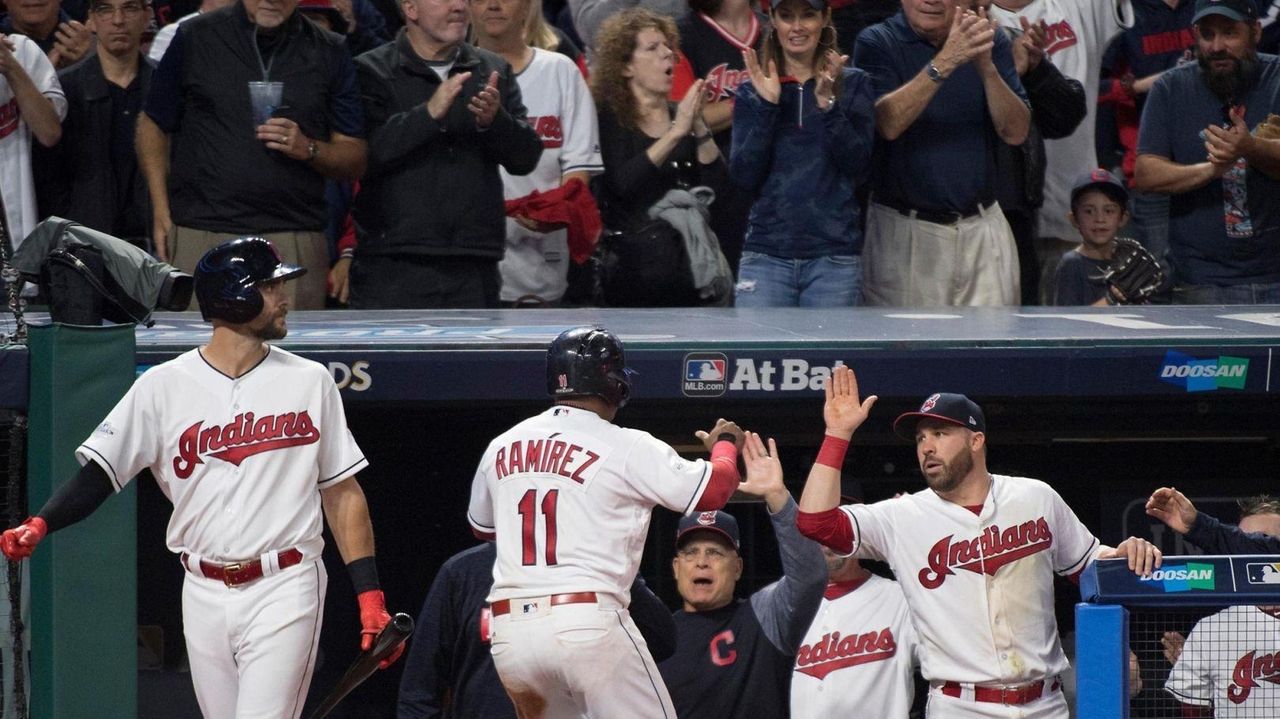 CLEVELAND — Aaron Hicks saved the Yankees the indignity of possibly being no-hit in their first American League Division Series game in five years. That one-out double in the sixth inning concluded the highlight portion of the evening for them.

Facing the varsity of the AL after the cakewalk that was the Twins in Tuesday’s wild-card game, the Yankees fell to the top-seeded Indians, 4-0, on Thursday night in front of a red towel-waving crowd of 37,612 at Progressive Field.

“Three hits,” Todd Frazier said of the Yankees’ total, “is not going to do it. There’s no chance you’re going to win a game like that.”

Terry Francona had opted to start Trevor Bauer, and his gamble came up aces. Now, leading 1-0 in the best-of-five series, Francona has ace Corey Kluber ready to go Friday.

“He’s been in a ton of these games, and you know that there’s no situation that is too big for CC,” Joe Girardi said.

Bauer, 2-0 with a 1.38 ERA in two starts against the Yankees this season, allowed two hits in 6 2⁄3 innings. The righthander, who completely outpitched Sonny Gray, struck out eight and walked one.

“Bauer really did a good job of commanding the strike zone today,” Brett Gardner said. “He didn’t seem to be missing a whole lot. Just a tough night for us offensively.”

Gardner was among those in the visitors’ dugout who thought umpire Vic Carapazza’s generous strike zone aided Bauer, but many of those players acknowledged that his stuff, mainly a diving curveball, was the biggest factor.

“That wasn’t the story of the game,” Chase Headley said of the strike zone. “It’s not like these pitches that guys disagreed with were a foot off the plate. That type of strike zone helped him out, he was getting the high strike, but I didn’t think it was overly lopsided by any means.”

Gray, the Yankees’ key acquisition at the trade deadline, allowed three runs, three hits and four walks in 3 1⁄3 innings. “When you put that many on base,” he said, “more times than not, it’s not going to turn out in your favor.”

Jay Bruce, a target of the Yankees whom the Indians acquired from the Mets in August, went 2-for-3, including a two-run homer, and drove in three runs.

The Yankees had one chance late against Andrew Miller. Headley walked with one out in the eighth and Gardner walked with two outs, putting two on for Aaron Judge. Francona called on righty closer Cody Allen to face Judge, who struck out on a 2-and-2 curveball in the dirt. He went 0-for-4 with four strikeouts, stranding three.

Gray did well to limit the Indians to one run in the second. Bruce led off by taking a fastball the other way off the wall in left-center for a double. Gray got ahead of Carlos Santana 0-and-2 but he lined the next pitch to right to put runners at the corners. Gray then hit Lonnie Chisenhall to load the bases, and Roberto Perez grounded into a 6-4-3 double play to make it 1-0.

Headley opened the third with a looper to the gap in left-center. Jason Kipnis, a newly converted centerfielder because of Ramirez’s breakout year at second base, robbed him of a hit with a diving catch. Bauer struck out Hicks and retired Gardner on a grounder to short.

Trailing 4-0, the Yankees threatened in the sixth. With one out, Hicks sent a curveball off the wall in left-center for a double and moved to third on Gardner’s grounder. Bauer fell behind Judge 2-and-0 but came back to get him looking on a borderline 2-and-2 curve. The rookie, who rarely looks sideways at an umpire, took issue with the call.

The pitches don’t figure to get any more hittable Friday. Kluber was 2-0 with a 1.59 ERA against the Yankees this season, allowing six hits and two walks with 18 strikeouts in 17 innings.

“Last time we faced him, he had his way with us,” Gardner said of Kluber’s start at the Stadium Aug. 28, when he allowed two runs and three hits in eight innings. “He’s one of the best, if not the best pitcher in the league. We need to come out tomorrow and have a little better at-bats.”